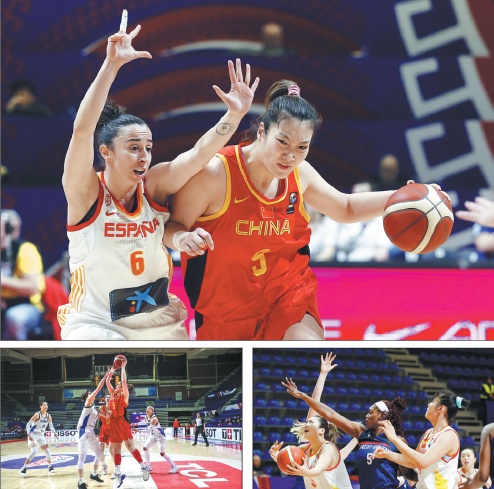 Li Meng remains steadfast in chasing her hoop dreams despite the sizable hurdles the Team China powerhouse has faced along the way.

Labeled "too small" for the basketball court as a child, Li was later beset by serious knee injuries that almost ended her burgeoning career. Last week the Shenyang native was presented with yet another setback after her Bayi team－the military's WCBA franchise－was disbanded.

"I keep going because I love the sport," Li, whose club future remains unclear in the wake of Bayi's demise, told Xinhua recently in an exclusive interview.

Li's athletic ability was apparent from a young age, with her parents initially keen for her try out swimming when she was 4 years old.

However, after swimming for just a year, Li began to suffer from earaches. The doctor's advice to her mother was clear: "Do not let your child swim again, as she may develop otitis media (an infection of the middle ear) due to her ears' constant exposure to water."

Li's mom finally gave up hope of her daughter becoming a star in the pool and instead decided basketball could be the right fit after hearing about a hoops class from a friend.

"When the coach first saw me, he refused to take me on board as I was only 5 years old then. From his viewpoint, such a young kid could not hone anything," Li recalled. "But my mom persuaded him to give me a chance. As you see, I've persisted in playing until now."

Li immediately fell in love with basketball. "At 5 years old, I never knew what it would bring me. But after I took it up, I found a passion for the game," she explained.

Li shot to prominence at the FIBA Under-17 Women's Basketball World Cup in 2010. She averaged 15.4 points and 6.2 rebounds as China claimed the bronze medal, with her stellar performance earning her the Most Valuable Player (MVP) award at the competition.

"I was taking photos with teammates at the ceremony, and suddenly heard my name called and received the trophy. I didn't realize how important it was until my coaches informed me after I returned home."

Li began to look forward to forging a professional career in the sport, however dark days soon arrived when she sustained anterior cruciate ligament (ACL) ruptures to both knees within less than six months.

"When I was injured for the first time, I was not quite worried about it. But then I got injured again, I began to think about it seriously," Li admitted.

She told her mother she wanted to stop playing basketball and instead focus on academic studies. However, thanks to her coaches' persuasion, Li decided to persist with her lifelong dream and finally made her professional debut in the 2012-13 WCBA season.

"You can be successful in the youth leagues with good skills, but in the pro league you have to know how to spur your teammates on with your character and strength."

China punched its ticket to the Tokyo Olympic Games in February, a feat made all the more impressive considering the country was battling against the COVID-19 outbreak at the time.

Li was the driving force in China's successful qualification campaign, and again won the MVP award.

"It is my dream to play at the Olympics, and my responsibility to represent my country. It also boosted everyone's confidence during that special period," she said.

Li believes the postponement of the Olympics offers the team more preparation time, and is urging the squad to maintain its training level and match fitness.

"We have to fully prepare for the Games. We have to review and see if there are some weaknesses, whether in mentality, condition or technique. Hopefully everyone can make some improvements before the Olympics," she said

After missing out on the 2016 Olympic Games in Rio de Janeiro, Li is determined to make the most of her opportunity in Tokyo. "I will strive to win an Olympic medal. This is also the team's target," she said.

Because of her exceptional physicality and outstanding all-round game, Li has earned the nickname 'Li-Bron', in reference to her idol LeBron James.

"Mentally he has a huge impact on me. He can step up anytime when the team needs him. There's a big difference in class between us, but I will spare no effort to get closer to his level," she said.

Li recently signed an endorsement contract with Nike and says the deal reflects the sportswear giant's recognition of her success and pushes her to work harder in future training.

"Now more and more people are following women's basketball. As players, we are also improving to make more people realize our value," she said.

"I'm on a road of challenging myself. I have a lot to improve on."

Li was offered a contract by WNBA franchise the Minnesota Lynx last year, but opted not to go to North America in order to better prepare for her Team China duties.

"No matter in the national team or club, I always target the top of the podium," she added.