ROME June 20 (Xinhua) -- Italy made it three wins from their Euro 2020 three Group A matches without conceding a goal as they beat Wales 1-0 on Sunday evening in Rome. 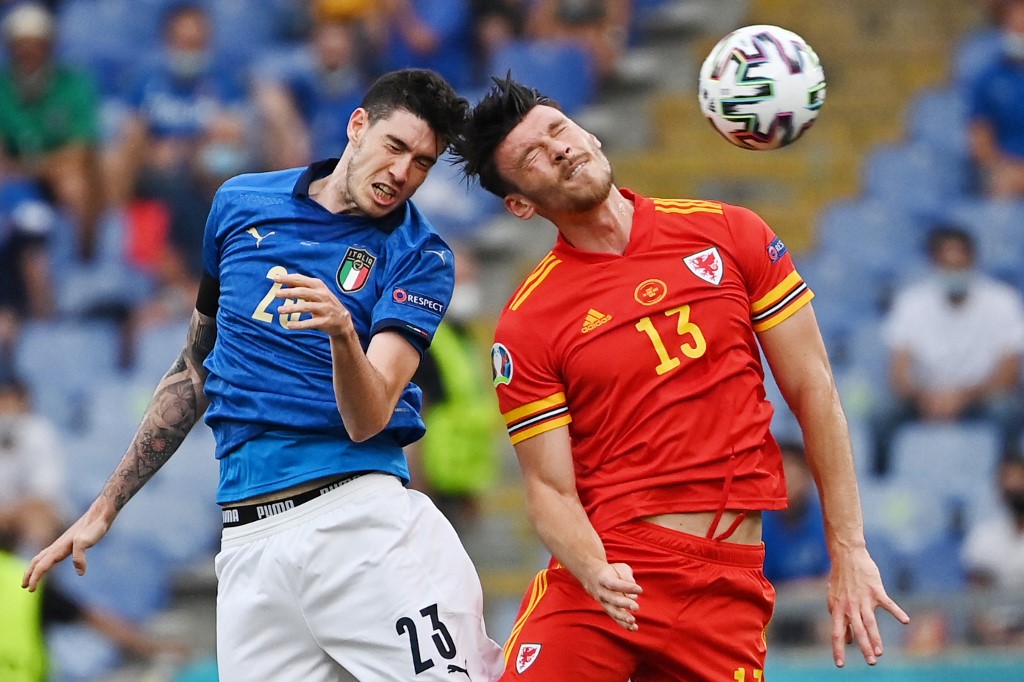 Italy's defender Alessandro Bastoni (L) vies for the header with Wales' midfielder Kieffer Moore during the UEFA EURO 2020 Group A football match between Italy and Wales at the Olympic Stadium in Rome on June 20, 2021. (Photo: AFP)

The Italians controlled the match from start to finish, giving the Welsh few options in either midfield or attack and after now withnot conceding a goal in over 1,000 minutes football, they have to be considered serious candidates for this year's European Championships.

With his side already assured of their place in the last 16, Italy coach Roberto Mancini made eight changes to the team that beat Switzerland in their first game and although his side maybe lacked some of the fluency of their wins against Turkey and the Swiss, Italy still controlled the game.

Marco Verratti was running the midfield, where the Welsh were keeping things tight, but struggling to string any moves together and all of the chances fell to Italy with Andrea Belotti firing just wide, before Verratti also sent effort the wrong side of Danny Ward's post.

Federico Chiesa flashed an effort across the face of goal and although Ward hadn't been forced into a difficult save, a goal looked to be coming. It arrived in the 39th minute when Matteo Pessina got a neat flick on Verratti's low free kick to send the ball in at the far post.

Another free kick early in the second half saw Italy again cause danger with Federico Bernardeschi rattling the woodwork, before Joe Allen almost found himself through on goal at the other end, before getting his feet in a tangle as he was caught in two minds what to do.

The Welsh were down to 10 men in the 55th minute when Ethan Ampadu was shown a straight red card for a late challenge that saw him plant his studs on the top of Bernardeschi's foot.

Chiesa found space on the right in the 59th minute, but Ward did well to keep Belotti's effort out as Italy kept up the pace looking for a second goal.

Another corner from Verratti caused problems for the Wales defense, before Bale smacked a volley over the bar in his side's best (and basically only) chance of the game. The Wales' captain was subbed shortly afterwards, perhaps to reserve him for the knockout phase as his side also progress to the next phase.

Meanwhile Mancini showed his confidence by replacing goalkeeper, Gianluigi Donnarumma in the 88th minute with Salvatore Sirigu on for the closing moments of the game.