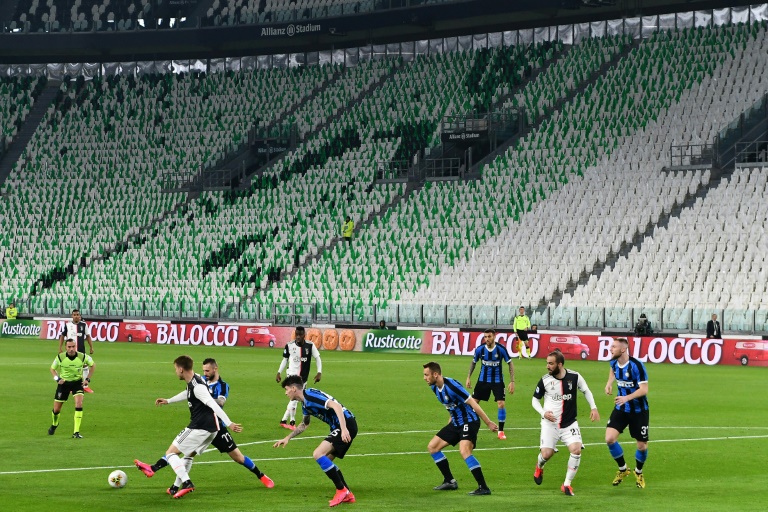 The fate of the Serie A championship hung in the balance Thursday as state scientists huddled with football bosses in a desperate effort to save the pandemic-interrupted season.

The high stakes talks come with pressure mounting from sports-deprived fans and cash-starved sponsors for Italy to follow the German Bundesliga's lead and return to action.

Serie A began to descend into chaos at the end of February as the new coronavirus swept across Italy's north -- home to big teams such as Inter Milan and Juventus.

Several important matches were rescheduled. Some teams in the south played regularly and others in the north were not even able to train.

The league eventually threw up its hands and suspended the championship on March 9.

Fewer than 500 people had then died of the virus and the league was hoping to kick off again by early April.

Italy's official toll now stands at almost 30,000 and the time to pin the Scudetto badge on the shirts of the undisputed Serie A champion is running out.

Italy's Sport Mediaset channel called Thursday "the most important day for the future of our championship".

Some eager clubs have already opened up their grounds to players ahead of the official resumption of organised training on May 18.

Cristiano Ronaldo will have to observe a 14-day quarantine after returning to Italy from nearly two months of confinement in Portugal.

His Juventus teammate Paulo Dybala said Wednesday he has been given the all-clear after first testing positive for the virus together with his girlfriend.

But rivals Torino confirmed that one of their players had tested positive and the issue of how to keep the disease from spreading on the pitch remains unresolved.

"I hope to restart football," Italy's Sports Minister Vincenzo Spadafora said ahead of the meeting.

"But if the safety issues are not settled, the government will decide to shut things down."

Media reports said the discussion could run on into the weekend as the sides try to figure out proper virus testing procedures and the logistics of travel through contagion zones.

Prime Minister Giuseppe Conte -- the first Western leader to impose a national lockdown to ward off the pandemic in March -- was expected to have the final say.

But Conte has erred on the side of caution throughout the crisis. He upset many at the end of April by delaying an expected announcement on when matches can resume.

Former Football Federation president Carlo Tavecchio warned that Italy's top three leagues faced the threat of lawsuits if their seasons were called off.

"If the championship is not finished, the rules of FIFA and UEFA will not be respected and there will be a lot of litigation, with losses not only for Serie A but also Series B and Serie C," Tavecchio said.

The former football executive said the "Italian system will default" unless the number of teams is immediately reduced.

"Football must be rescued through desperate measures," Tavecchio said.