Italy overcame stubborn Austria 2-1 in extra-time at Wembley on Saturday to reach the Euro 2020 quarter-finals as Denmark breezed through by hammering Wales 4-0. 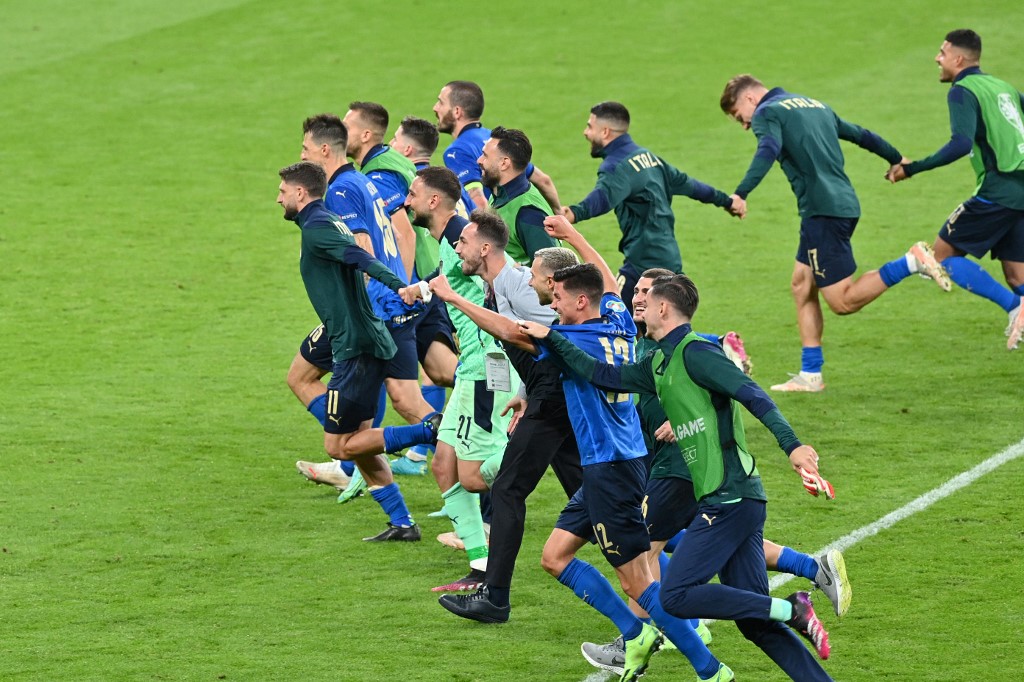 Italy's players celebrate after extra-time in the UEFA EURO 2020 round of 16 football match between Italy and Austria at Wembley Stadium in London on June 26, 2021. (Photo: AFP)

Roberto Mancini's side, who earned rave reviews after their cruise through the group phase, were made to work hard for their win and had super subs Federico Chiesa and Matteo Pessina to thank.

Italy's fans gave a rousing rendition of their national anthem and were the more enterprising team in the first half but Austria came back strongly after the break and cursed a VAR decision to rule out a goal for Marko Arnautovic 20 minutes into the second half.

Despite multiple attempts on goal from both sides, they were locked at 0-0 after 90 minutes in London.

But Chiesa made the crucial breakthrough five minutes into extra-time and another goal from Pessina gave Italy a two-goal cushion.

There was still time for late drama when Austria's Sasa Kalajdzic pulled a goal back but Italy progress and will play the winners of Sunday's tie between Belgium and holders Portugal.

Mancini, who has rebuilt the Azzurri after their humiliating failure to qualify for the 2018 World Cup, said his side "deserved" the result.

"In the first half we could have scored a couple of goals and then after the break we dropped off physically," he told Italy's public broadcaster RAI.

"We won thanks to the players who came on with the right mindset and resolved the situation. I knew it would be hard, maybe even more so than in the quarter-finals."

Earlier, Denmark eased into the quarter-finals with a 4-0 win over Wales in Amsterdam's Johan Cruyff Arena thanks to two goals from Kasper Dolberg's and late goals from Joakim Maehle and Martin Braithwaite.

The Danes, carried by a wave of emotion, are the neutrals' favourites after overcoming the trauma of Christian Eriksen's cardiac arrest in their opening game.

They will face the Netherlands or Czech Republic in the quarter-finals after winning a knockout tie at the European Championship for the first time since they stunned the continent by winning the tournament in 1992.

It is exactly 29 years since Denmark defeated Germany in the final in Gothenburg having famously only qualified because war-torn Yugoslavia disintegrated.

"It is hard to believe that this is reality," said coach Kasper Hjulmand. "Johan Cruyff is one of my great inspirations and this was also Christian's first home after leaving Denmark.

"I am really grateful for all the support we got, and the guys are true warriors. Being in the quarter-finals now is amazing."

Wales, surprise semi-finalists at Euro 2016, found the majority of the stadium filled by Danish supporters, with fans barred from entering the Netherlands from Britain due to Covid-19 restrictions.

Robert Page's side made a promising start as Gareth Bale drilled just wide from distance, but Dolberg curled Denmark ahead with a sumptuous strike shortly before the half hour.

The Nice forward, brought into the team as a replacement for Yussuf Poulsen, then pounced on a poor clearance by Neco Williams to fire home a second just after half-time.

Maehle added a third goal for Denmark two minutes from time before Harry Wilson was sent off for a lazy challenge on the Atalanta player.

Braithwaite rubbed further salt into Welsh wounds with a fourth goal in stoppage time as Denmark became the first team in European Championship history to score four in successive matches.

"We tried to play in the second half but made a mistake to concede which killed the momentum on our side," said Wales and Real Madrid forward Bale.

"To finish how we did is disappointing... the boys are frustrated and angry, but I'd rather we go out like that, kicking and screaming, than laying off and doing nothing."