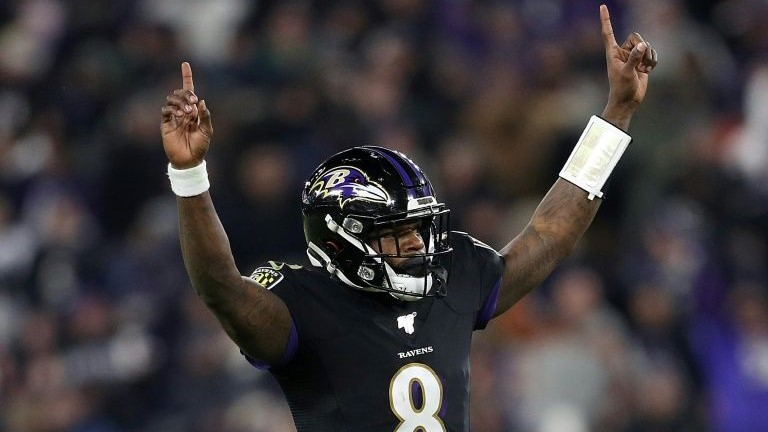 Lamar Jackson of the Baltimore Ravens celebrates after surpassing Michael Vick's single season record for most rushing yards by a quarterback in the game against the New York Jets at M&T Bank Stadium, December 12, 2019. (Photo: CGTN)

Lamar Jackson tied his career-best of five touchdowns passes as the Baltimore Ravens clinched the AFC North Division title with a 42-21 victory over the New York Jets on Thursday.

Jackson also broke the NFL's single season record for rushing yards by a quarterback and now has a league leading 33 touchdown passes, matching the franchise record set in 1996 by Vinny Testaverde.

He completed 15 of 23 passes for 212 yards and rushed for 86 yards on eight carries to raise his total rushing yards to 1,103, surpassing Michael Vick.

Vick, who was convicted of being involved in a dog fighting ring in 2007 and served almost two years in prison, rushed for 1,039 yards for the Atlanta Falcons in 2006.

"That's pretty cool," Jackson said of passing Vick. "I was trying to be locked in. I am with Michael Vick and it is amazing.

"I still go on YouTube and watch his highlights. He was one of the greats."

Jackson didn't waste time overtaking Vick's record as he passed him with a five-yard run on his third carry of the opening quarter.

He faked a handoff to Ingram on the record-breaking run before running to the right side and getting tackled at the Jets' six-yard line.

Mark Ingram rushed for 76 yards on 13 carries and scored two touchdowns as the Ravens increased their conference-best record to 12-2.

"We got to keep it going. We got a lot of season left to play," said Jackson, who has thrown for five TDs in a game three times this season.

In a strange post-game scene, Jackson was mobbed by Jets' players who wanted his autograph so he brought out extra jerseys from the Ravens' dressing room to sign.

"He's special. He's the MVP," said Ingram of Jackson. "He's humble and he has what it takes to be a great quarterback in this league for a long time."

Quarterback Sam Darnold completed 18 of 32 passes for 218 yards and two touchdowns for the Jets, who dropped to 5-9 on the season.

Darnold was intercepted once and had a fumble as New York lost for just the second time in the past six games.

Jamison Crowder caught six passes for 90 yards and two touchdowns for the Jets.

Ingram scored to give Baltimore a 7-0 lead in the first quarter. Jackson tossed a five-yard scoring pass to Boykin to make it 13-0 with 2:50 left in the quarter.

New York got on the scoreboard when Crowder caught a four-yard scoring pass from Darnold with 13:27 left in the half.