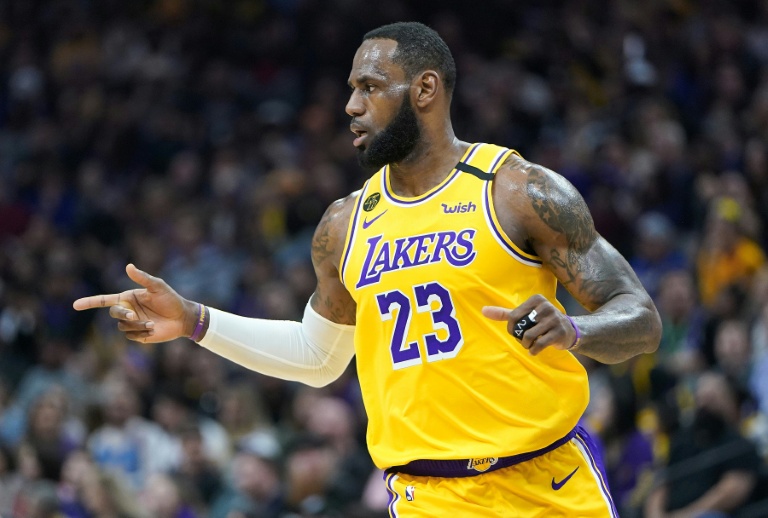 LeBron James was named in a provisional 44-strong player pool for the US basketball Olympic team on Monday. (Photo: AFP)

LeBron James and injured superstars Steph Curry and Kevin Durant were named on Monday in a 44-strong pool of players in contention for spots on the United States Olympic basketball team.

A statement from USA Basketball named three-time Olympic champion James and Los Angeles Lakers team-mate Anthony Davis in the player group, which will eventually be whittled down to a 12-man roster.

"This is the first step in USA Basketball identifying the 12 players who will represent the United States as members of the 2020 US Olympic men's basketball team in Tokyo," said USA Basketball men's team managing director Jerry Colangelo said in a statement.

"Over the course of the remainder of the NBA season we'll continue to monitor all of the athletes. Selecting the 12-man USA roster will obviously be an extremely challenging and difficult process, and we will again attempt to select the very best team possible," he added.

The US team, which will be chasing a fourth consecutive Olympic gold medal following wins in 2008, 2012 and 2016, will be coached by San Antonio Spurs boss Gregg Popovich.

The list of contenders revealed that USA Basketball is keeping the door open for several players recovering from long-term injuries.

Golden State Warriors star Curry, who has hardly played this season after undergoing surgery on his left hand, has long spoken of his determination to play in the Tokyo Olympics.

Curry, who is hoping to return for the Warriors next month, withdrew from the 2016 Olympics after knee and ankle problems.

Curry's Golden State team-mate Klay Thompson, who has not played at all this season after undergoing knee surgery in July 2019, is also named in the 44-man player pool. Thompson was a member of the US team which won gold in Rio four years ago.

Durant meanwhile, who has yet to play a game for the Brooklyn Nets after signing for the club last July, is also named in the squad list. Durant, who is recovering from a ruptured Achilles, was a star of the US gold medal-winning teams at the 2012 and 2016 Olympics.