The Los Angeles Lakers were determined to start the second half of their season on a high note following a loss that snapped a nine-game winning streak. 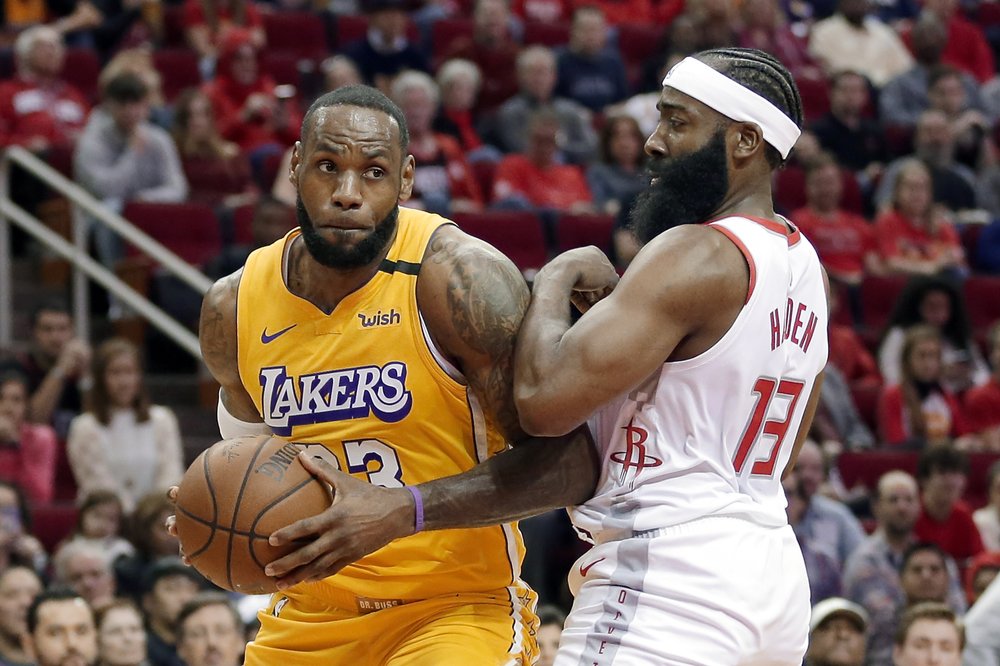 Los Angeles Lakers forward LeBron James (23) bumps Houston Rockets guard James Harden (13) as he drives to the basket during the first half of an NBA basketball game Saturday, Jan. 18, 2020, in Houston. (Photo by AP)

They were able to do that by riding a big third quarter to a 124-115 win over the Houston Rockets.

LeBron James had 31 points and 12 assists for the Lakers, who lost to Orlando on Wednesday night.

“We hated the loss that we had the other night against Orlando,” James said. “So we had a couple of days to kind of just reshape, refocus and start the second half of the season the right way, and we did that tonight.”

The loss was the third straight for the Rockets, which tied a season high, and they have dropped four of five.

“We’re just not playing well right now,” coach Mike D’Antoni said. “We haven’t played well for a couple of weeks. And the only way you can get out of it is play hard, keep your head down and just go forward.”

Kyle Kuzma scored 23 points, and Danny Green and Kentavious Caldwell-Pope each had 20 for the Lakers.

Russell Westbrook scored 35 points for his fourth straight 30-point game and James Harden had 34 for the Rockets, who also lost three in a row in late November.

Harden is confident the Rockets can break out of their funk.

“Everybody throughout the course of your career has been through some tough times and the only way you can get through them is continue to work and continue to go hard and mentally lock in and just try to be as solid as possible,” Harden said.

James was impressed with the work Kuzma did against Westbrook in the second half when he was held to 13 points.

“Kuz just kept his body in front of him and made him take tough shots,” James said. “He made a couple but Kuz made it tough on him, so that helped changed the game for us.”

Los Angeles didn’t lead in the first half but used a 32-point third quarter to take a nine-point lead into the fourth.

Houston used a 6-0 run to cut the lead to 10 with about seven minutes left, but the Lakers scored the next six points to extend it to 110-94 midway through the quarter. That sent many Rockets fans streaming for the exits and caused a large contingent of Lakers fans to start chanting, “Let’s go Lakers.”

The Rockets did not get closer than seven points the rest of the way.

The Lakers opened the second half with a 10-3 run to take their first lead of the game, 69-68, with about eight minutes left in the third quarter. James capped that run by making a basket and then added another one seconds later after JaVale McGee blocked a dunk attempt by Clint Capela. McGee beat his chest and screamed after in Capela’s direction after the play and received a technical foul for taunting.

“We picked up our intensity,” Dwight Howard said. “Then JaVale got some big blocks, which got us out in the open court. So we’ve just got to make sure we continue to do that.”

There were about seven minutes left in the third when Westbrook and Anthony Davis, who missed the game with an injury, both received technical fouls for jawing at each other.

The Lakers led by three later in the third when Kuzma scored the first four points of a 9-2 run that stretched the lead to 85-75.

Houston had a chance to cut the deficit at the end of the third quarter, but Westbrook missed two free throws to leave the Lakers up 91-82 entering the fourth.

Rockets: Westbrook is the first Rocket besides Harden to score 30 points in four straight games since Tracy McGrady did it in six games in a row in the 2006-07 season. ... Eric Gordon had 13 points. ... Capela had 12 rebounds.

James on what it meant to have so many Laker fans in Houston on Saturday night: “It’s very humbling. And it’s something that you really can’t explain unless you’re involved in it.”