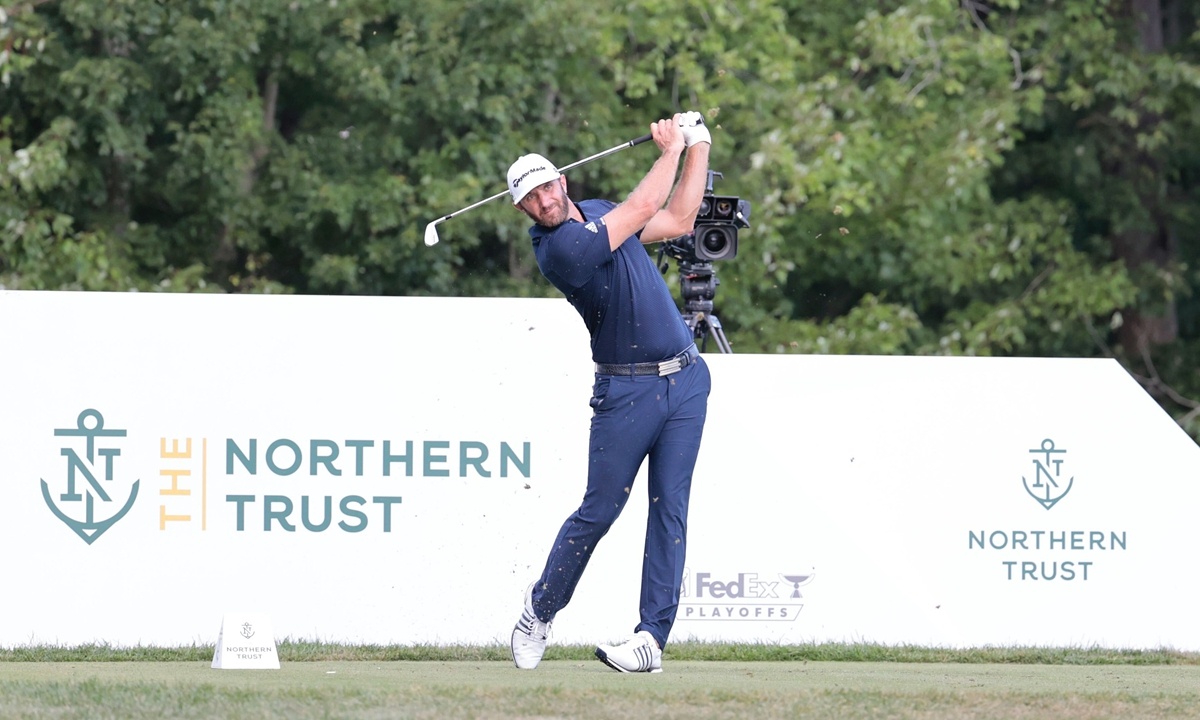 Dustin Johnson plays a shot during the final round of the Northern Trust at TPC Boston on Sunday in Norton, Massachusetts. (Photo: VCG)

Dustin Johnson seized the world No.1 ranking in emphatic style Sunday, firing an eight-under-par final-round 63 to win the US PGA Northern Trust by 11 strokes.

Johnson finished with a 30-under-par total of 254 at TPC Boston, with Harris English a distant second on 265 after a closing 69.

Johnson's 22-under third-round total had given him the largest 54-hole lead on tour this season - five strokes - and he was quick to build on it on Sunday.

He set the tone with an eight-foot eagle putt at the second, set up by a magnificent seven-iron over the ­water.

Birdie putts of 10 and 13 feet at the seventh and eighth saw him make the turn five-under for the day, and he rolled in another four-foot birdie at the 12th.

The only thing that slowed him was a weather delay, the horn sounding just after he teed off on 17.

Johnson returned and birdied the par-five 18th in near darkness and steady rain.

He matched the second-lowest score in relation to par in a 72-hole US PGA Tour event.

Ernie Els holds the record of 31-under shot at Kapalua in 2003, and Jordan Spieth won the 2016 Tournament of Champions with a 30-under total.

His margin of victory was the largest on tour since 2006.

"It is a big margin, and I'm definitely really proud of that," Johnson said. "I played really good. I knew I was playing well and I knew the guys were going to shoot low.

After a tough putting round on Thursday, Johnson put himself on the path to victory with an impressive 11-under 60 on Friday - when he was 11-under through 11 holes before parring his way to the clubhouse.

Told his 30-under total didn't give him a record, Johnson wasn't bothered.

Former US Open champion Johnson toppled Spain's Jon Rahm from the top of the rankings, and will also lead the US tour's FedEx Cup standings going into the second playoff event, the BMW Championship.

"Something that I'm very proud of is to be No.1 in the world, and I'd like to stay there for a little while," Johnson said.

South Africa's Louis Oosthuizen grabbed the final spot in the 70-man BMW field with a birdie at the final hole on Sunday, coming back after the rain delay and capping a two-over 73. That put him in a tie for 13th, and knocked Doc Redman out of the top 70 in the playoff standings.