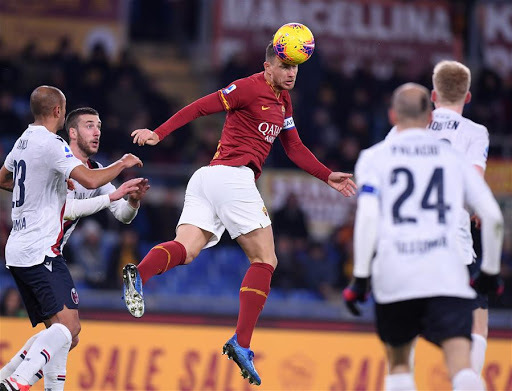 Roma's Edin Dzeko (C) jumps to head the ball during a Serie A soccer match between Roma and Bologna in Rome, Italy, Feb. 7, 2020. (Photo by Alberto Lingria/Xinhua)

The 34-year-old striker from Bosnia and Herzegovina (BiH) recently said he would like to stay in Rome, but last week his club was sold for 591 million euros (about 698 million U.S. dollars) to the Friedkin Group, Inc., owned by the American billionaire Thomas Daniel Friedkin.

On Wednesday evening, FC Roma has posted a six-minute-video showing all 106 goals that Dzeko scored since he came to Roma five years ago. Some commented that the Roma's Facebook post could be a farewell rather than an anniversary present.

Roma executives have recently said that the decision to stay or leave is on Dzeko, but also added that should he decide to leave, the price tag would be 20 million euros (about 23.6 million dollars).