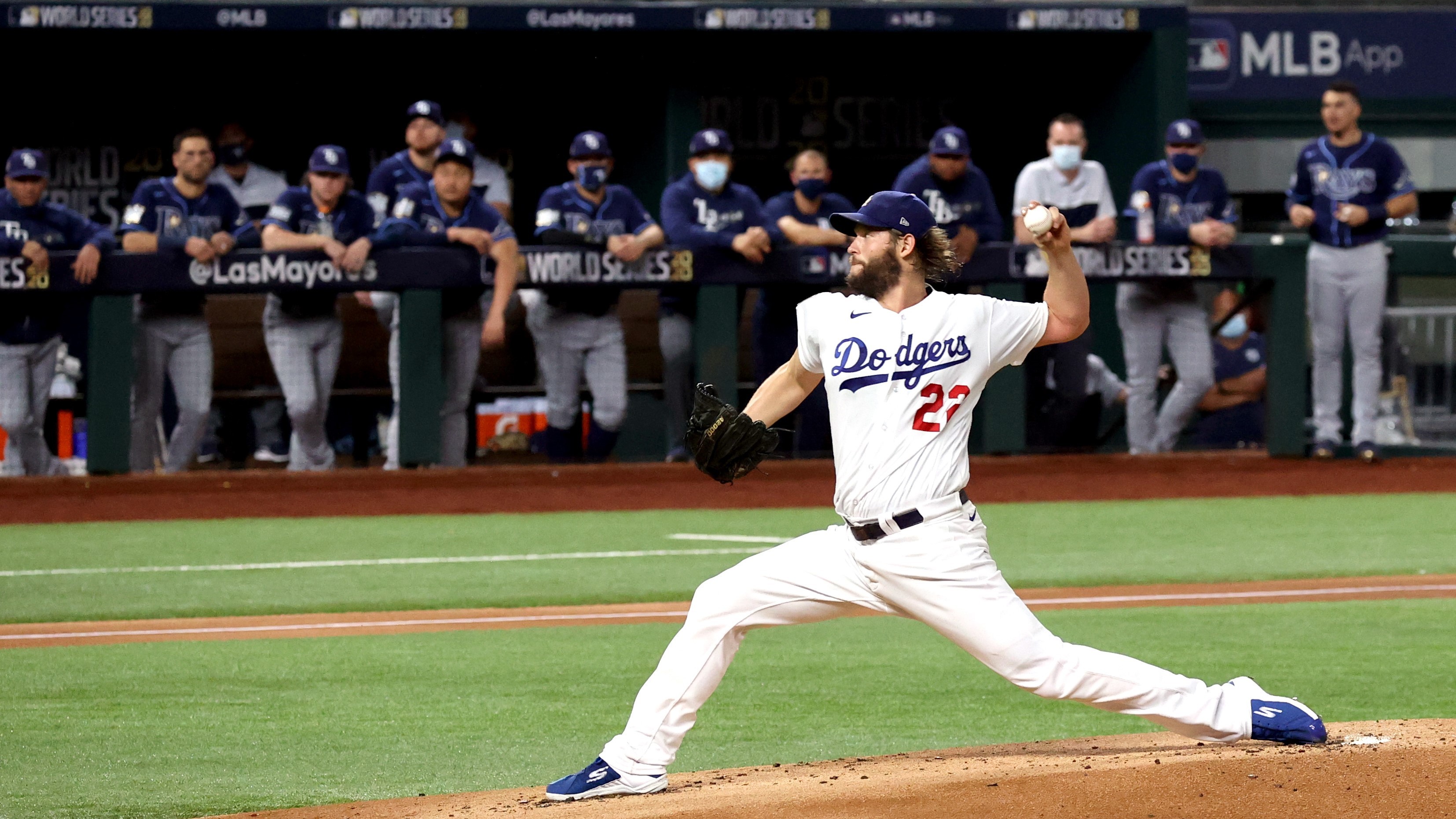 Clayton Kershaw #22 of the Los Angeles Dodgers delivers the pitch during the first inning in Game 1 of the MLB World Series against the Tampa Bay Rays at Globe Life Field in Arlington, Texas, October 20, 2020. (Photo: VCG)

Nothing out of the ordinary there, even if the setting was surreal.

Baseball's best team during the pandemic-shortened season showed off its many talents in the first World Series game played at a neutral site, beating the Tampa Bay Rays 8-3 Tuesday night.

With the seats mostly empty, Kershaw dominated for six innings, Bellinger and Betts homered and the Dodgers chased a wild Tyler Glasnow in the fifth inning and coasted home in the opener.

A crowd limited by the coronavirus to 11,388 at Globe Life Field, the new $1.2-billion home of the Texas Rangers, marked the smallest for baseball's top event in 111 years. 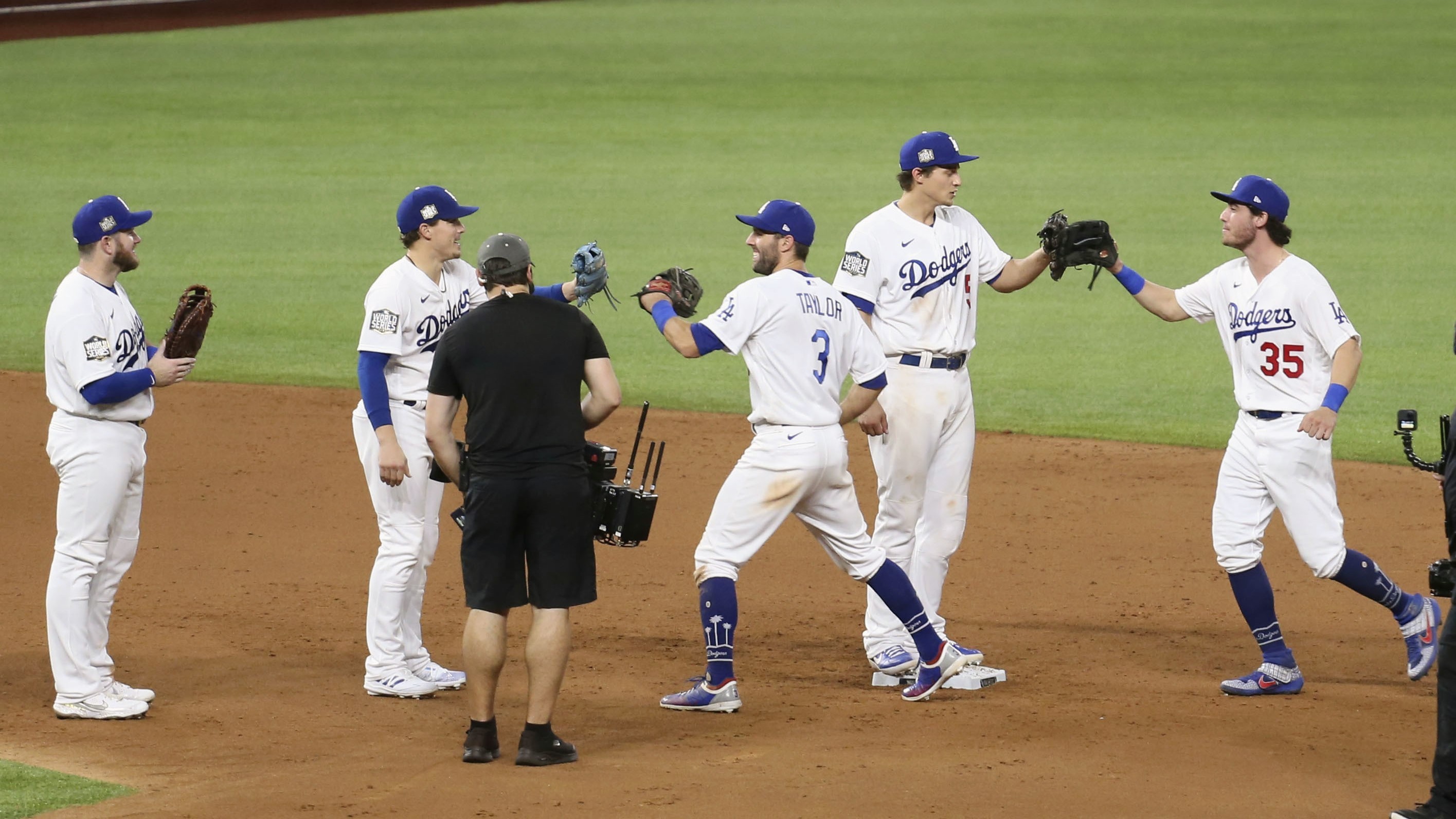 Players of the Los Angeles Dodgers celebrate after winning Game 1 of the MLB World Series against the Tampa Bay Rays at Globe Life Field, October 20, 2020.

Los Angeles hopes to go home with a title that has eluded the Dodgers since 1988 but tried to guard against focusing ahead.

A regular season star with an erratic postseason history, Kershaw looked like the ace who so often stars on midsummer evenings with the San Gabriel Mountains behind him at Dodger Stadium. With these games shifted, the 32-year-old left-hander wound up pitching not far from his off season home in Dallas.

The three-time Cy Young Award winner allowed one run and two hits, struck out eight and walked one. He induced 19 swings and misses among his 78 pitches – more than his three previous Series starts combined. 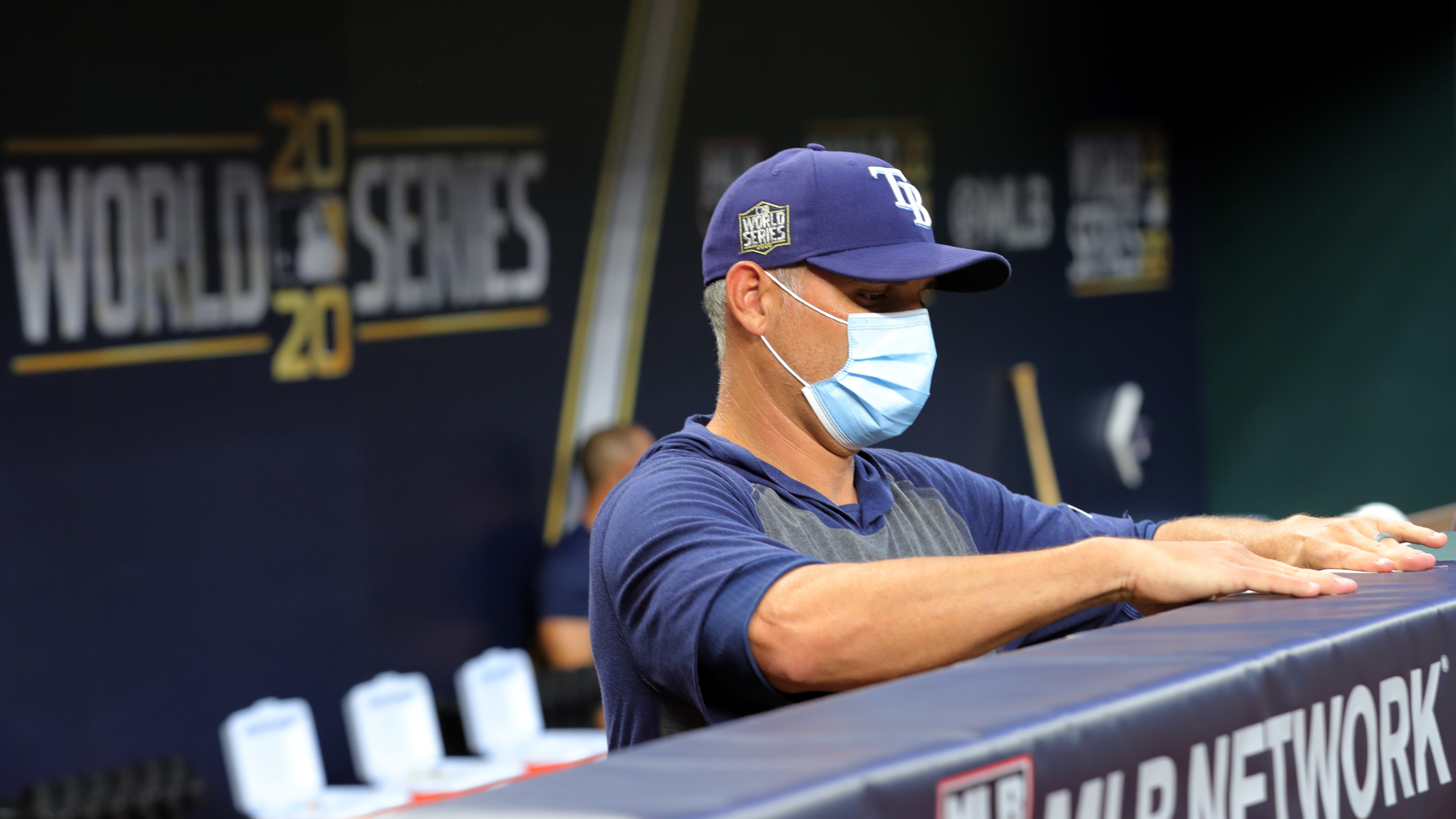 Kevin Cash, manager of the Tampa Bay Rays, is seen in the dugout in Game 1 of the MLB World Series against the Los Angeles Dodgers at Globe Life Field, October 20, 2020.

"You can appreciate and totally see why he's heading to the Hall of Fame one day whenever he's done," Rays manager Kevin Cash said.

Kershaw threw nine balls in the first, when he stranded a pair of runners, then threw just nine more over the next three innings.

"He had a game plan to try to really quiet down things from there and he executed," said Kevin Kiermaier, who ended Kershaw's streak of 13 retired in a row with a fifth-inning homer on a hanging slider that cut the Rays' deficit to 2-1.

Kershaw, a five-time ERA champ, improved to 2-2 in the World Series and 12-12 in postseason play, a shadow of his 175-76 regular season record. Dodgers manager Dave Roberts did not pitch him after Game 4 of the NL Championship Series last Thursday.

"I think we were going to stay away from him in Game 7 just for this particular reason," Roberts said. 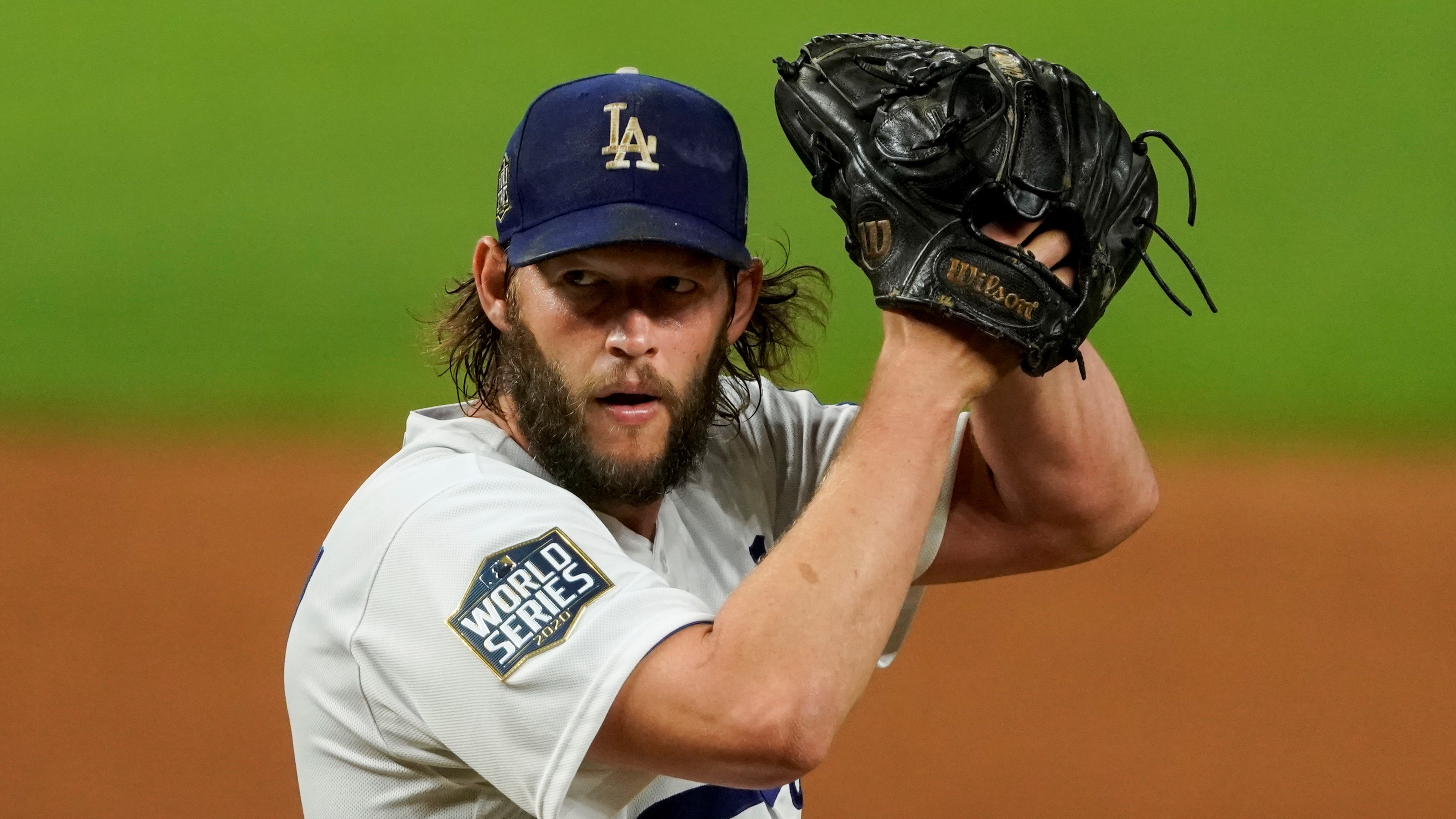 Clayton Kershaw of the Los Angeles Dodgers pitches in Game 1 of the MLB World Series against the Tampa Bay Rays at Globe Life Field, October 20, 2020.

Game 2 is Wednesday night. The Dodgers, who posted the best record in the majors during the shortened season and showed off all their stars in Game 1, plan to throw a collection of pitchers started by Tony Gonsolin against Rays ace Blake Snell.

Bellinger, the 2019 NL MVP who began the opener with a career .114 batting average in 12 World Series games, had put the Dodgers ahead in the fourth with a two-run homer off Glasnow, having no trouble driving a 98 mph pitch into the Dodgers bullpen in right-center.

Bellinger, whose seventh-inning homer put the Dodgers ahead in Game 7 of the NL Championship on Sunday, shuffled his feet, tapping gently as he crossed the plate and celebrated by toe tapping teammates while dancing back to the dugout, a sign he remembered popping his right shoulder during raucous revelry two nights earlier.

He capped his evening by leaping at the 6-foot center field wall in the ninth, robbing Austin Meadows of a possible home run. 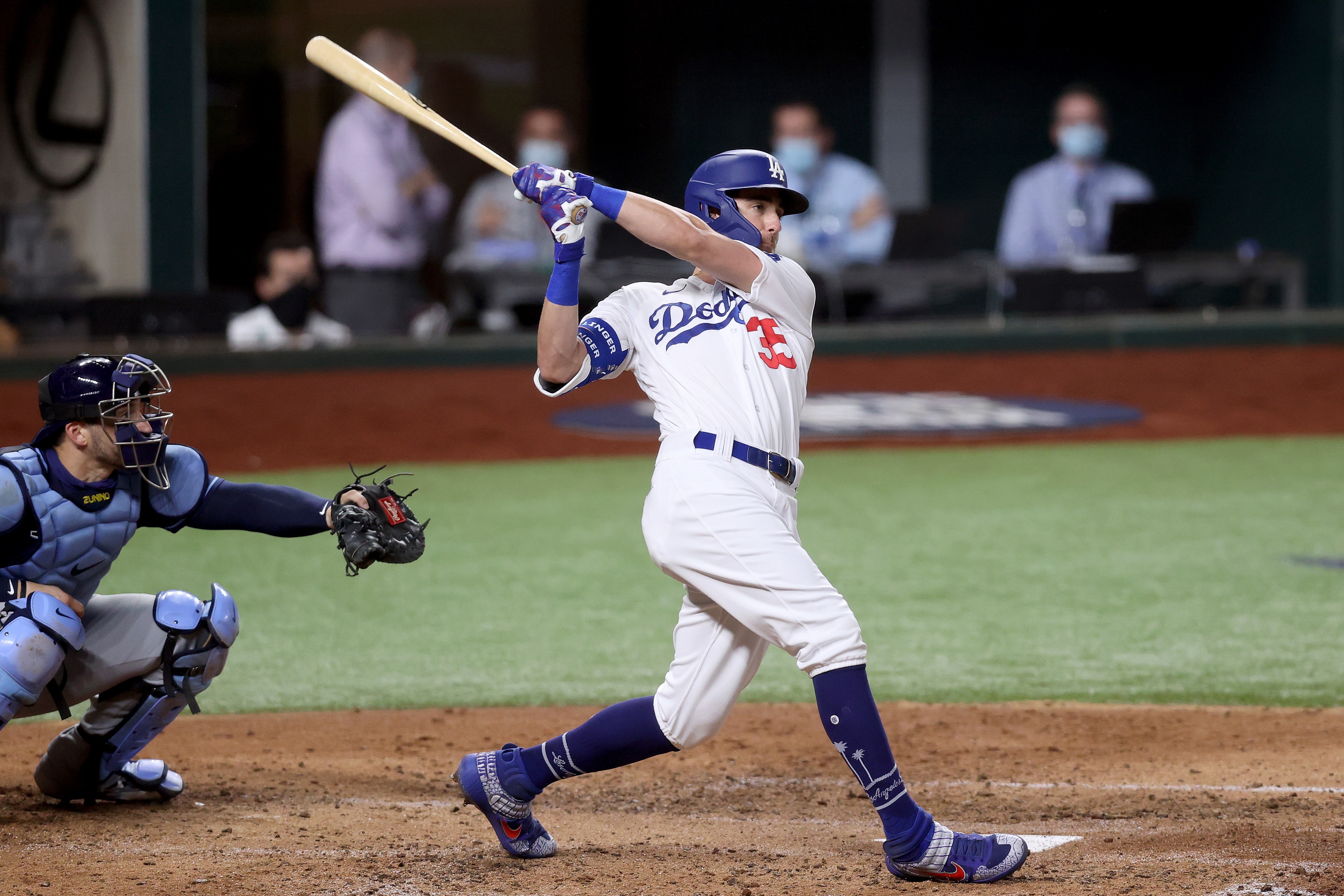 Cody Bellinger #35 of the Los Angeles Dodgers hits a two run homer in Game 1 of the MLB World Series against the Tampa Bay Rays at Globe Life Field , October 20, 2020.

"I said it today before the game: If I hit one I'm not touching anybody's arm," Bellinger said. "I'm going straight foot, and it was pretty funny."

Betts, brilliant throughout October but slumping at the plate, added his first postseason homer for the Dodgers, an opposite-field solo shot to right in the sixth off Josh Fleming.

Betts had two hits, scored two runs and stole two bases in the four-run fifth, when Corey Seager swiped one as Los Angeles became the first team to steal three bases in a Series inning since the 1912 New York Giants in Game 5 against Boston.

"That's a weak spot of my game, holding runners," Glasnow said. "Has to be something I focus on more in the future. "

Betts became the first to hit a home run, steal two bases and score twice in a Series game.

"Stolen bases are a thing for me. That's how I create runs and create havoc on the basepaths," he said. 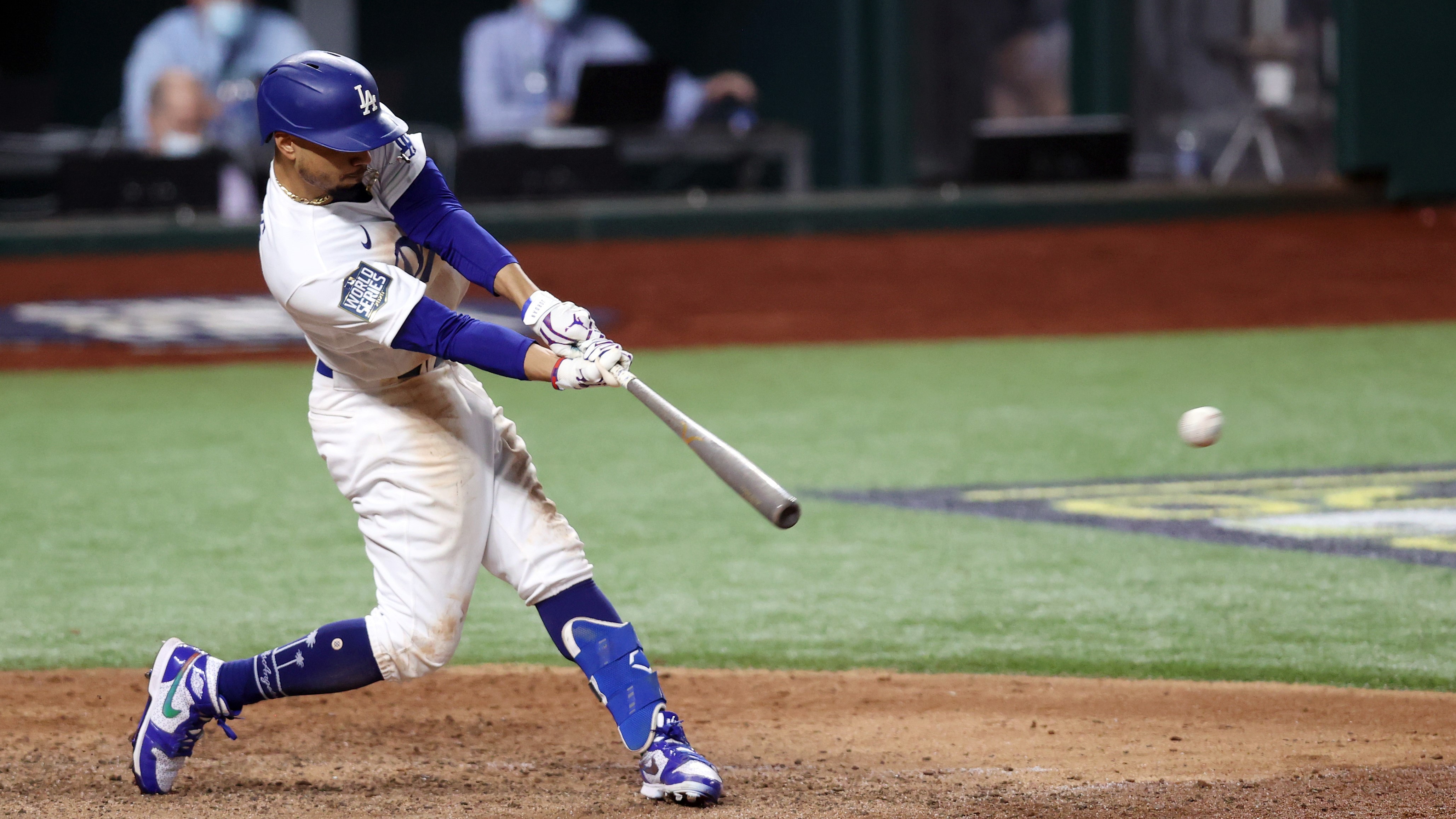 Mookie Betts of the Los Angeles Dodgers hits a single in Game 1 of the MLB World Series against the Tampa Bay Rays at Globe Life Field, October 20, 2020.

Los Angeles is in the Series for the third time in four years but seeking its first title since the Kirk Gibson- and Orel Hershiser-led team of 32 years ago. Coming off an unusual LCS of games on seven straight days, the Dodgers planned an all-bullpen outing for the next game.

Tampa Bay was held to six hits. Its only previous Series was a five-game loss to Philadelphia in 2008.

Glasnow was chased after 4 1/3 innings with an ominous pitching line that included three hits, six runs, six walks and eight strikeouts. He threw a career-high 112 pitches and became the first to walk six or more in a series game since Edwin Jackson of St. Louis in Game 4 of 2011. Glasnow went to three-ball counts on 12 of 23 batters.

Los Angeles expanded its lead to 4-1 in the fifth, when Cash left Glasnow in to face left-handed-hitting Max Muncy with runners at the corners. Muncy hit a one-hopper to first baseman Yandy Díaz with the infield in, and Betts beat a strong but slightly offline throw with a headfirst slide past catcher Mike Zunino.

Will Smith finished Glasnow with an RBI single, and Chris Taylor and pinch-hitter Kike Hernandez followed with run-scoring singles off Ryan Yarbrough for a 6-1 lead. 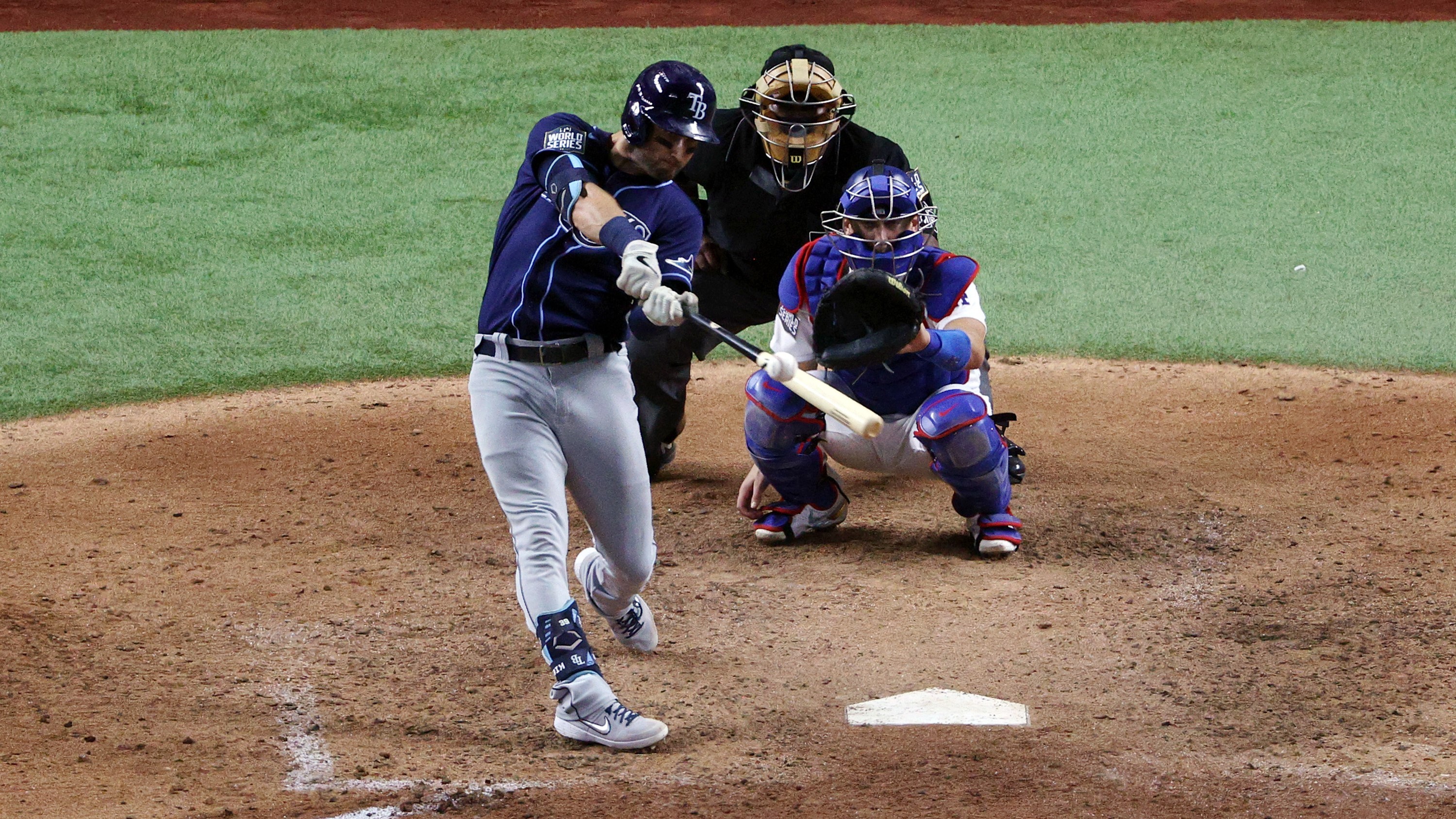 Kevin Kiermaier #39 of the Tampa Bay Rays hits an RBI single in Game 1 of the MLB World Series against the Los Angeles Dodgers at Globe Life Field, October 20, 2020.

Justin Turner and Muncy doubled on consecutive pitches in the sixth.

Pinch-hitter Mike Brosseau and Kiermaier singled in runs in the seventh against Victor Gonzalez, who snagged Zunino's line drive and doubled Brosseau off second base for an inning-ending double play.

After a regular season played without fans, MLB resumed selling tickets with a limited amount for the NLCS at Globe Life and kept that up by allowing about 28 percent of capacity to be filled at the 40,518-seat ballpark, where the roof was open. The crowd was widely dispersed throughout and was the smallest for the Series since 10,535 attended Game 6 between the Pirates and Tigers at Detroit's Bennett Park in 1909, according to the Elias Sports Bureau.

"They're everywhere. They always come out," Kershaw said. "And so for as much as a game as we would have liked it to have been at Dodger Stadium and the 56,000 chanting, after everything that's gone on this season, to have 10-, 11,000 people in the stands and a good bit of them being Dodger fans is pretty cool."