LaMelo Ball of the Charlotte Hornets looks on in the game against the Detroit Pistons at Spectrum Center in Charlotte, North Carolina, U.S., May 1, 2021. (Photo: CFP)

LaMelo Ball of the Charlotte Hornets has been named the NBA Rookie of the Year, announced the league on Wednesday.

The 19-year-old No. 3 selection from the 2020 NBA Draft beat the No. 1 draftee Anthony Edwards of the Minnesota Timberwolves and the No. 12 selection Tyrese Haliburton of the Sacramento Kings from the same class in the competition for the award.

Ball is the third player in Hornets history to receive the honor after Emeka Okafor and Larry Johnson.

"Rookie of the year, and well deserved. Huge congrats @MELOD1P ! Can't wait to get out on the court with you again. Just the beginning!" Ball's teammate Gordon Hayward posted on Twitter. 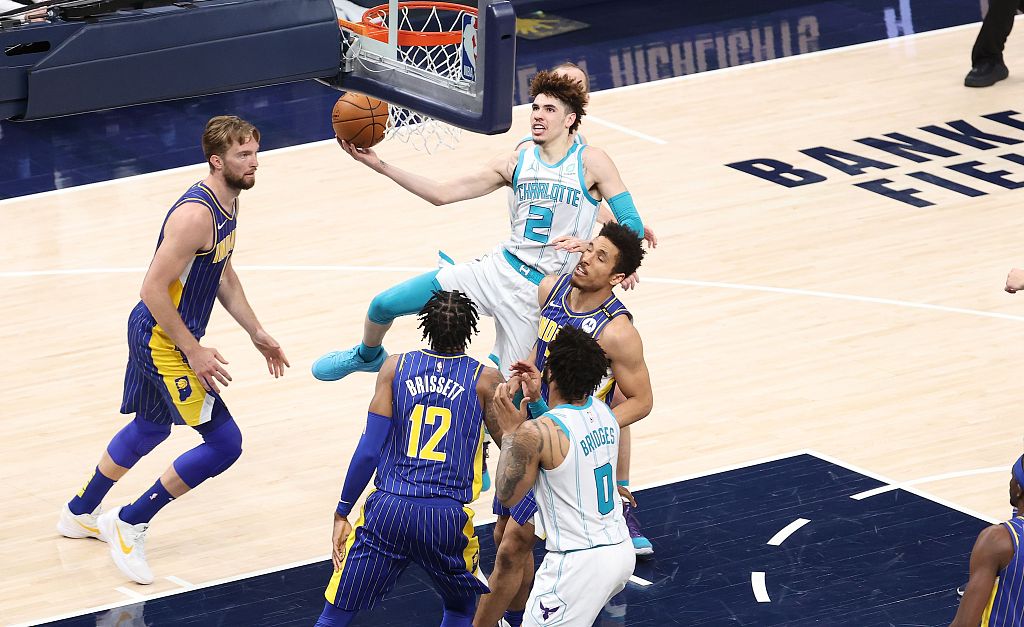 LaMelo Ball (#2) of the Charlotte Hornets drives toward the rim in the NBA Eastern Conference play-in tournament game against the Indiana Pacers at Bankers Life Fieldhouse in Indianapolis, Indiana, U.S., May 18, 2021. (Photo: CFP)

Though a fractured wrist cost Ball 21 games in the regular season, he averaged 15.7 points, 5.9 rebounds and 6.1 assists per game, shooting 35.2 percent from the 3-point line. On January 9, Ball had a triple-double of 22 points, 12 rebounds and 11 assists against the Atlanta Hawks, becoming the youngest NBA player to do so.

Ball got used to the NBA pace very quickly. In February, he averaged 20.1 points, 6.3 rebounds, 6.7 assists and 1.7 steals in 13 games to join LeBron James and Luka Doncic as the only three players in NBA history to average at least 20 points, six assists and six rebounds in 10+ games over a calendar month.

"I think Melo has adjusted to the NBA game better than any of us ever thought this early in his career. He has exceeded our expectations," said Michael Jordan, owner of the Hornets, in March. Selecting Ball with the No. 3 pick is one of the few correct decisions the NBA GOAT (Greatest Player of All Time) has ever made in the draft.