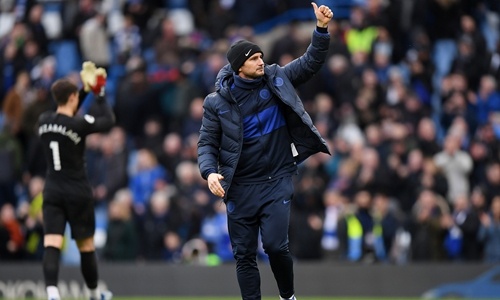 Chelsea manager Frank Lampard believes the Blues can be proud of their response to the coronavirus crisis.

The London club quickly offered the use of a hotel at their Stamford Bridge stadium to health workers once Premier League matches were suspended last month and have promised to match all donations made to domestic abuse charity Refuge during a six-week fundraising campaign.

Unlike a number of other Premier League clubs who have attracted criticism for using the UK government's furlough scheme to pay non-playing staff, Chelsea have so far decided against using public money.

"I'm very proud to be the manager of this club with the way Chelsea have handled it," Lampard told Sky Sports.

"They were very quick to respond with the help of the hotel and there's a lot more work going on with the foundation, with link-ups and with getting in touch with fans.

"There are a lot of people at Chelsea who have really stood up."

Premier League players had been in the firing from prominent politicians, including UK health secretary Matt Hancock, for not agreeing pay cuts.

A fund has since been set up by Premier League stars where they will donate to help frontline workers in the health service and talks over deferring wages are ongoing at a number of clubs.

"Football players will try and do the right thing," added Lampard.

"I think they needed some time and the politicians jumped the gun while things were being prepared. It was unfortunate that picture got painted."

With the virus yet to peak in the UK, the Premier League season has been indefinitely suspended with no date even for clubs to return to training. In the meantime, players are having to keep fit at home, but Lampard is wary of a quick return to action when restrictions are lifted.

German clubs have already returned to training in small groups with hopes the Bundesliga can restart behind closed doors next month.

Similar proposals have been made for the Premier League to complete the season without fans at matches over the summer months.

"It's challenging in that it's unprecedented and we don't know how long it's going to go on for," said Lampard.

"We're trying to stay in contact with the players. In football we're so used to schedules and routine and this is completely different.

"We may have a short preseason coming up so the players need to be ready. But they are professionals so you have to trust that they will want to come back as well as they can."