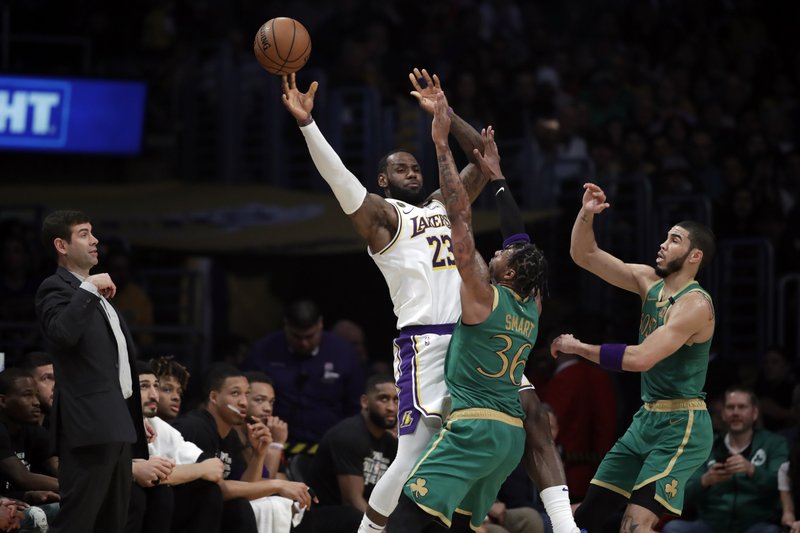 LeBron James scored 29 points and put the Lakers ahead on a fallaway jumper with 30 seconds to play, and Los Angeles split its season series with the Boston Celtics with a 114-112 victory Sunday.

James missed a tying free throw moments before he coolly nailed the shot the put the Lakers ahead to stay in a frenetic fourth quarter to cap the latest chapter of this famed NBA rivalry.

Anthony Davis had 32 points and 13 rebounds in the fifth straight win overall for the Lakers, who took a 32-point blowout loss in Boston last month.

Davis hit two free throws with 12.3 seconds left and added one more with 6.7 seconds to play, before Jayson Tatum was called for charging in the final second as he attempted to create one last basket.

Tatum matched his career high with 41 points for the Celtics, who had won 12 of 14 starting with that dominant win over the Lakers in January.

Boston turned the ball over with 15.5 seconds left after James’ big shot, and Celtics coach Brad Stevens got a technical foul for arguing about it. Davis missed that free throw, however.

Grant Williams hit two free throws for Boston immediately afterward, and Davis hit one of two to give a final chance to the Celtics.

The rematch was far more competitive than the teams’ first meeting this season, with both taking small leads in the fourth quarter before the exciting finish.

With the Lakers’ immediate return to excellence since beating out Boston to acquire Davis last summer, these longtime rivals are both playoff-bound championship contenders yet again.

Los Angeles is comfortably atop the Western Conference standings, while the Celtics sit third in the East. Both teams have a decent shot of meeting in the NBA Finals for the 13th time if they continue to grow from big games like this thriller.

Tatum underlined his growing superstardom by matching the career high he set against New Orleans last month. He scored 16 points in a five-minute barrage alone during the third quarter, finishing the period with 18.

The Lakers hung in with 16 points in the third from Davis after his quiet first half.

Walker scored 20 points against the Lakers last month to beat James for the first time in the stars’ 29 career meetings. The Lakers took their worst loss of the season in that initial meeting while getting just 23 minutes from Davis, who had just returned from a two-week injury absence.

The rematch featured much more defense than the teams’ first meeting, with Rajon Rondo and Brown both making big steals for their respective clubs. Only Tatum made a major offensive impact in the first half with 19 points.

Celtics: Walker’s injury is “not a long-term thing,” Stevens said. Walker did work in the weight room before the game. ... The bench scored just five points in the first three quarters, including only one field goal, and finished with 11 points.

Lakers: James went down in pain early in the fourth quarter when Daniel Theis ran into him under the basket. James stayed in the game after a timeout. ... Rondo spent much of the pregame warmup chatting with Kevin Garnett, his longtime Celtics teammate. Garnett then watched the game from the baseline near the LA bench with Lakers part-owner Patrick Soon-Shiong. ... The matchup is always a hot ticket for celebrities. Fans near courtside included Eddie Murphy, Mark Wahlberg and Denzel Washington.