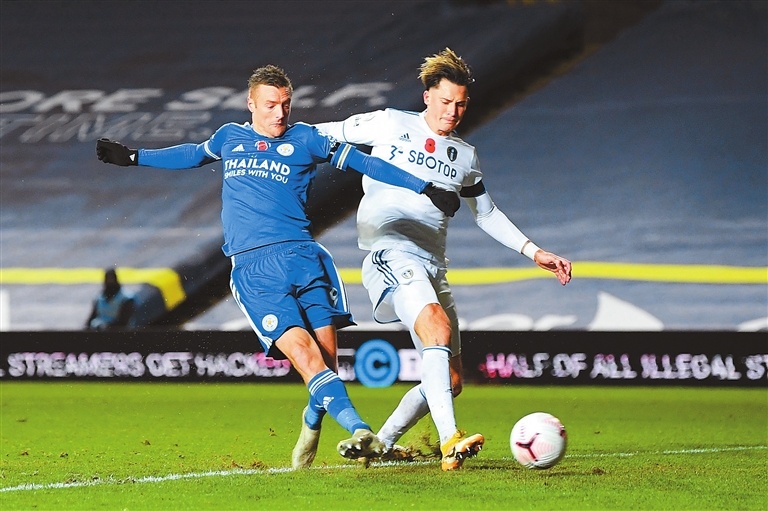 JAMIE VARDY helped to create two early goals and then scored a superb third as Leicester beat Leeds 4-1 to secure a fourth straight away win in the English Premier League (EPL) and climb into second place Monday.

The striker shows no sign of slowing down at the age of 33, moving to seven goals for the campaign as he looks to follow up winning the Golden Boot as the league top scorer last season.

Vardy was alert to pounce on a loose back-pass by Robin Koch, round goalkeeper Illan Meslier and square the ball for Harvey Barnes to open the scoring after just 121 seconds — Leicester’s quickest goal since August 2017.

The second goal in the 21st minute also stemmed from Vardy’s movement as he latched onto a right-wing cross and sent in a header that was saved by Meslier onto his own forehead. The ball bounced back out for Tielemans to convert from close range.

Leeds, looking to follow up a 3-0 win at Aston Villa last time out, reduced the deficit in the 48th when a cross from Stuart Dallas went over everyone in the area and bounced into the far corner of the net.

Vardy ensured there would be no comeback for the hosts, though, by finishing off a length-of-the-field team move involving substitutes James Maddison and Cengiz Under, who lifted a cross over to Vardy to score in the 76th.

His last nine goals have come away from home.

Vardy missed out on getting the chance to net a second goal of the night because he was substituted just before Maddison was fouled in the area in the 90th minute. Tielemans took over spot-kick duties and dispatched his shot into the top-left corner.

Leicester is a point behind Liverpool at the end of the seventh round. The two led the way for the first half of last season, too, before Leicester fell away after Christmas.

Elsewhere, Fulham chalked up its first Premier League win of the season and climbed out of the relegation zone after first half goals from Bobby Decordova-Reid and Ola Aina helped the side to a 2-0 victory over West Bromwich Albion.

Fulham dominated the opening half although the visitors nearly drew first blood in the second minute when Conor Townsend hit the woodwork with a cross-turned-shot from the left.

Decordova-Reid gave Fulham a 26th-minute lead when he nodded the ball past goalkeeper Sam Johnstone from close range after Aleksandar Mitrovic headed an Antonee Robinson cross from the left across the face of goal.(SD-Agencies)