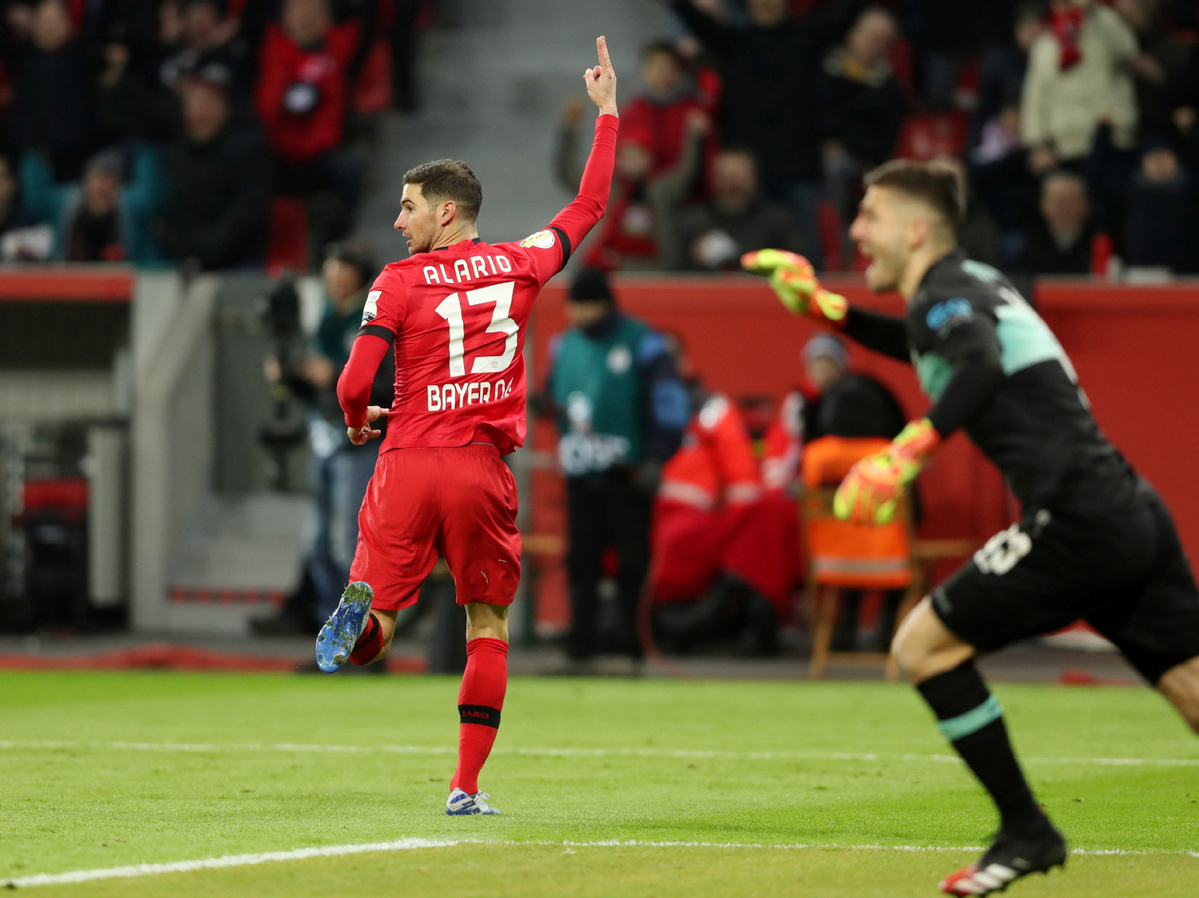 Bayer Leverkusen's Lucas Alario celebrates a goal before it is disallowed during the German Cup match against Stuttgart, Feb 5, 2020. (Photo: Agencies)

BERLIN - An own goal from goalkeeper Fabian Bredlow and a goal from Lucas Alario were enough for Bayer Leverkusen to edge second division side Stuttgart 2-1 at the round of the last 16 in the German Cup on Wednesday.

From the kick off the "Werkself" let the ball do the work and came to chances through Kai Havertz, who missed the far-post corner with a long-range effort from 20 meters in the 12th minute before he tested Bredlow from close range six minutes later.

However, second-division outfit Stuttgart reaped the best chance in the 26th minute when Silas Wamangituka rattled the woodwork from 15 meters.

Leverkusen controlled the ball and thought they had opened the scoring just before the break but Havertz close-range goal was ruled offside.

Stuttgart came out strong and grabbed a bright start after the restart as Nicolas Gonzalez forced custodian Lukas Hradecky intro action from tight angle in the 48th minute.

As the match progressed Leverkusen took over and had another two goals ruled out due to offsides. The hosts eventually broke the deadlock in the 71st minute when Bredlow fisted a corner into the wrong goal.

Stuttgart were unable to put up resistance whereas Leverkusen doubled their advantage in the 83rd minute when Alario deflected a clearance from Bredlow into the goal.

The visitors suddenly sparked to life and reduced the arrears out of the blue after Silas Wamangituka slotted home from five meters in the 85th minute.

Stuttgart put the hosts on the back foot and pressed for the equalizer but all their efforts remained fruitless as Leverkusen survived a late onslaught to book their place in the next round.

"We have not played very well today but the most important thing is that we progressed into the next round," Bayer Leverkusen head coach Peter Bosz said.

Elsewhere, Union Berlin advanced into the quarterfinals for the second time in the club's history as Robert Andrich's last-gasp hammer knocked out lower league side SC Verl on the road.