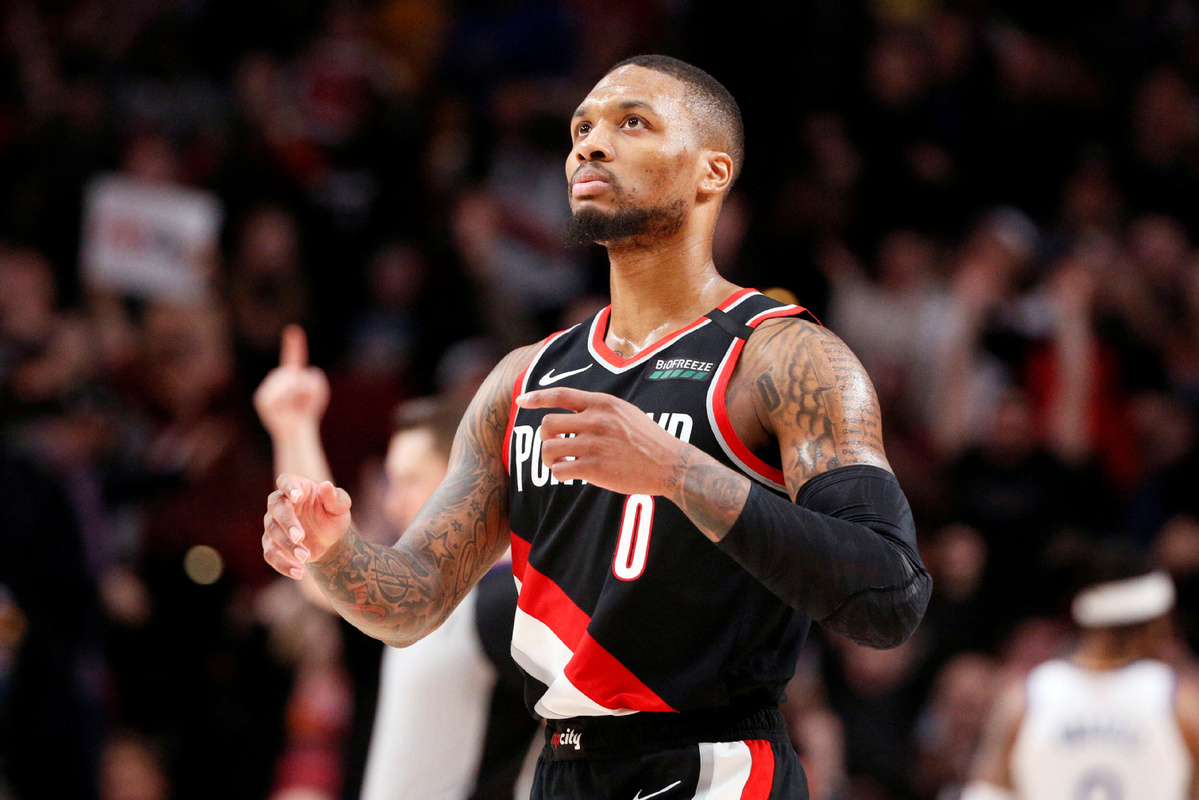 Portland Trail Blazers guard Damian Lillard (0) gestures after making a three point basket against the Golden State Warriors during the second half at Moda Center in Portland, Oregon, US, on Jan 20, 2020. (Photo: China Daily)

Grieving the death of a cousin and missing his mother, Damian Lillard struggled emotionally after the NBA shut down because of the coronavirus.

But he also found inspiration in his activism for Black Lives Matter and his flourishing music career.

The Trail Blazers were just out of the playoff picture, sitting ninth in the Western Conference standings on March 11 when the league was shuttered. The team will be among 22 to next week depart for Orlando for the restart.

Portland will have eight games to secure a playoff berth, starting on July 31 against Memphis.

Lillard welcomes the chance to resume playing after a difficult few months. He admittedly had no idea how serious the virus was when the league closed down. He went to Phoenix with his family, intent on finding a gym to stay in shape during the layoff. But the NBA said players couldn't go to third-party facilities or trainers because of health concerns.

While grateful that he had his fiance and son with him, Lillard essentially sheltered in place once he got back to Portland. He didn't see his mom for more than a month. And then his cousin and personal chef, Brandon Johnson, suddenly passed away.

"It was tough, man. I think that was when I got to the point where I was like, if I was waking up and it wasn't a sunny day, it was messing with my mood. It was just tough," Lillard said. "I got through it, just from having a lot of my family around. That really helped. So I can see why somebody who is with one person or by themselves would have a really hard time. Definitely a tough few months."

Always diligent about his fitness, Lillard found a way to train. Then George Floyd was killed in Minneapolis, touching off nationwide protests over police brutality. Lillard marched in Portland.

"I grew up with Oscar Grant, who was killed at a BART (Bay Area Rapid Transit) station while handcuffed facedown. I've been racially profiled by cops, before I was in the NBA. So I have thoughts and feelings about this stuff. That's what Blacklist was about," he said.

Lillard was averaging 28.9 points and 7.8 assists this season. In January he scored 61 points in a game against the Warriors and he had seven games with 40 or more points.

He'll be among those sequestered at Disney's Wide World of Sports Complex for games, but the resumption of the season comes as cases of COVID-19 are spiking in Florida. Some players have opted out, including Portland's Trevor Ariza and Caleb Swanigan.

But Portland will see the return of big men Jusuf Nurkic, now recovered from a broken leg last season, and Zach Collins, who was sidelined with a shoulder injury.

One thing that's not a concern for the Blazers is fitness.

"They've been very diligent about taking care of themselves, both in the weight room and on the court, and treatment. So I've been very impressed," Blazers coach Terry Stotts said. "They're not in NBA game shape yet, but I think with a month to go, with the practices that we're going to have, and the way they've taken care of themselves so far, I don't think it's a stretch that they'll be more than ready."

Lillard is confident in his own ability to stay healthy, but he doesn't quite trust everyone else. The NBA announced this week that nine additional players had tested positive for the virus, bringing the total of league players who have contracted it to 25.

"I feel like it's still a possibility for something to spread within that bubble, just with there being so many people and so many different things that we've got to follow to be safe, even though we're not exposed to the public," he said.