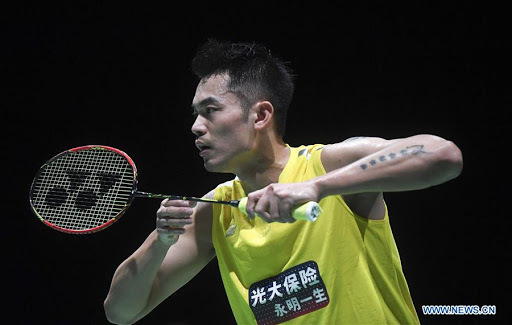 It was a departure of a legend, and the end of an era.

BWF, the governing body of world badminton, said the exit of Lin signaled "the end of one of the most stellar careers in world badminton." The IOC also referred to Lin, when reporting the news, as the "all-time great" of the sport.

Good rivals can make each other better, and this has happened again and again in various sports disciplines.

"My thanks also go to my excellent 'opponents' who inspired me," Lin said in his farewell letter.

The other three are all phenomenal shuttlers, but Lin, nicknamed "Super Dan," has reached a league of his own - the only men's singles player to retain the Olympic gold medal and a record five World championships.

He claimed his first title in 2002 at the Korea Open and became world number one for the first time in February 2004, and then solidified that status with his first All England Open title the following month.

It was after that final that he was dubbed "Super Dan" by his opponent Gade, and the nickname has since been widely used by his fans as well as the media to refer to him, in recognition of his achievements.

Hidayat, the 2004 Athens Olympics champion, was Lin's biggest rival early in his career as the Indonesian denied the Chinese twice in two finals at the 2005 World Championships and 2006 Asian Games.

But as Hidayat dropped his momentum rapidly after 2006, Lin's time had arrived and Lee became his greatest adversary. The pair's rivalry at the top of the sport, which lasted for almost 10 years, became a captivating story.

The year of 2008 saw the pair meet for the first time in the Olympic final stage in Beijing. With the home crowd providing earsplitting support, Lin played one of his career's most classic matches and stormed to a 21-12, 21-8 win to clinch his first Olympic title.

After beating old rival Hidayat in round two, Lin went all the way to the final. On the other side of the net again was Lee, who came to the Games as world No.1 and favorite for the crown.

It was a tough clash for both sides. Lee was even closer to the gold after sweeping the first game 21-15, but Lin hit back to win the next two games 21-10, 21-19 and become the first man to retain the Olympic singles title.

Lee finally got a chance to beat Lin in the Olympic Games at Rio 2016, where he ended his old-foe's hopes of an unprecedented hat-trick of Olympic titles in the semifinals.

When hearing of the decision by Lin to end his career, Lee was one of the first to pay tribute.

"We knew this day would arrive, a heavy moment in our lives. You pulled down the curtain gracefully, you were king where we fought so proudly; Your final wave, all four disappear, within the hush of silent tears," Lee wrote emotionally on Twitter.

Lee's poetic turn of phrase refers to the fact that Lin was the last one of the "Top Four Kings" to finally hang up his racket.

Gade, the eldest of the four, announced retirement in 2012 at the age of 36. Hidayat withdrew one year later, after losing his last international match to an unseeded Japanese player at home. Lee, the arch-rival of Lin, was forced to end his career in June, 2019 after almost a year since he was diagnosed with nose cancer and failed to make a comeback.

During his past 20 years with the national team, Lin has established himself as the kind of athletes that seemed born for the big occasions.

He has pocketed 20 major titles in his career, including two Olympic golds, five worlds titles, six Thomas Cup, five Sudirman Cup and two World Cup titles. Keep in mind that this tally does not include his six victories at All England Open and two Asian Games golds.

But just as all other greatest athletes, Super Dan cannot overcome aging.

He had a lackluster performance entering the Tokyo Olympic cycle and also encountered many challenges in the Olympic qualification process. His hope of gaining a ticket to Tokyo was slim, but the 37-year-old didn't give up and still trained hard for his goal of reaching his fifth Olympic Games. But the Tokyo Olympic Games were postponed by one year due to the COVID-19 pandemic, further casting a shadow of doubt on Lin's journey to Tokyo.

"Being 37 years old, my physical condition and injuries no longer allow me to fight alongside my teammates. There is gratitude, reluctance and frustration. In the days to come, I hope to spend more time with my family, and I will also look for a new 'competition'," Lin said.

Badminton had been his obsession over the course of 20 years with the national team. But if one thing is certain about Super Dan, it is his ability to create milestones everywhere he goes, a determination that he will now bring into this new chapter of his life.