SPORTS Liverpool can do without ‘Anfield boost’: Klopp

Liverpool can do without ‘Anfield boost’: Klopp 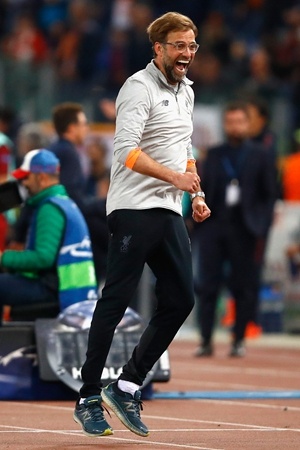 Liverpool manager Jurgen Klopp ­believes his runaway leaders will cope without the "best kick in your ass" of their Anfield crowd should the Premier League season resume.

English top-flight football players are set to be back in training this week after a Premier League meeting on Monday gave the go-ahead to the first stage of the return to play protocols.

If matches do eventually take place again this season, they will be behind closed doors and possibly at neutral venues.

Liverpool were left 25 points clear at the top of the table when the coronavirus saw the season suspended in March.

They now need just two more wins to claim a first English title in 30 years and German boss Klopp, having watched his native ­Bundesliga resume last weekend without spectators at matches, is confident his players can motivate themselves without a crowd.

"The competition will make the intensity," Klopp told Liverpool's website.

"So it's not about 'oh, Liverpool have to win two games.'

Former Borussia Dortmund manager Klopp added, "We have to do it, unfortunately, without the best boost in the world and the best kick in your ass in the right ­moment in the world, from the Anfield crowd.

"But that's how it is. It's 100 percent [that] the perfect package of football is a full, packed Anfield stadium, two really good teams, big fight, super goals and at the end Liverpool win. That's the perfect matchday.

"So, a lot of these things are possible but Anfield will not be packed for a while... We love that but we cannot have it.

"And it looks like it will be possible - and it is in Germany already possible - to play behind closed doors.

"All the physical numbers of the games in Germany were incredibly high, so like 117 or 118 kilometers running, without anybody shouting at you that you have to run. Just because you want it, because you do it for your teammates.

"That's exactly what we have to do as well."

Players are now allowed to train in small, socially distant sessions not lasting longer than 75 minutes.

"From a physical point of view, the boys are in a good shape, I think. Then we have to start getting used to the pitch, football boots and balls again," said Klopp.

"For the body that's a big challenge because these little turns and stuff like this, these football-specific things, they make all the difference," explained the Reds' manager.

"It's like when you come back from an injury, the boys are fit ­really early from an endurance point of view - they could run a marathon probably - but the ­moment you start playing football, you can see how different it is."