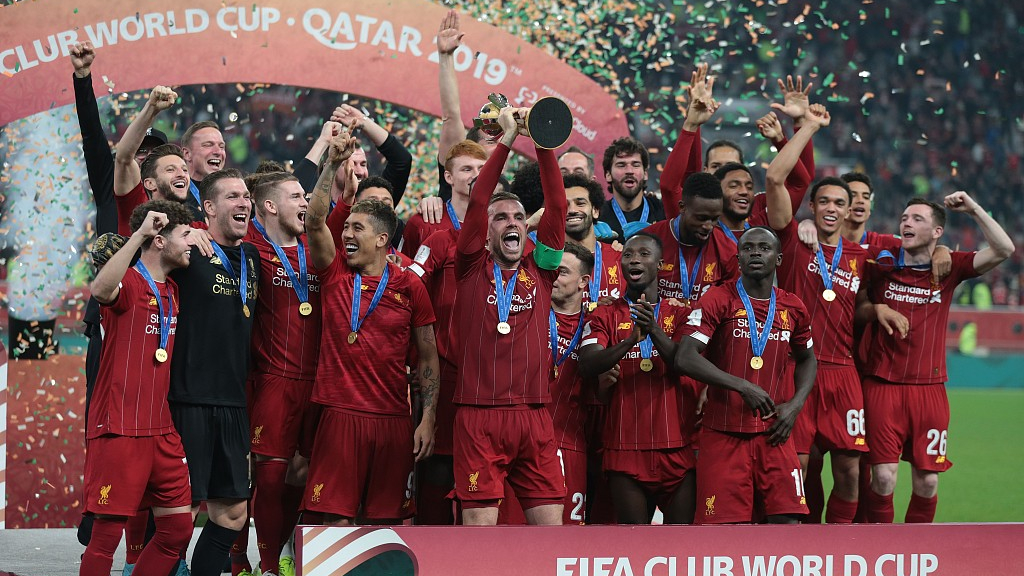 Players of Liverpool lift the trophy during a ceremony at the end of the FIFA Club World Cup final between Liverpool FC and CR Flamengo at Khalifa International Stadium in Doha, Qatar, December 21, 2019. (Photos: VCG)

An extra-time goal from Roberto Firmino gave Liverpool a 1-0 victory over Brazil's Flamengo to win the Club World Cup at the Khalifa International Stadium on Saturday.

It is the first time Liverpool have won the competition, which features each continent's champions, and they became only the second English team to lift the trophy after Manchester United in 2008. 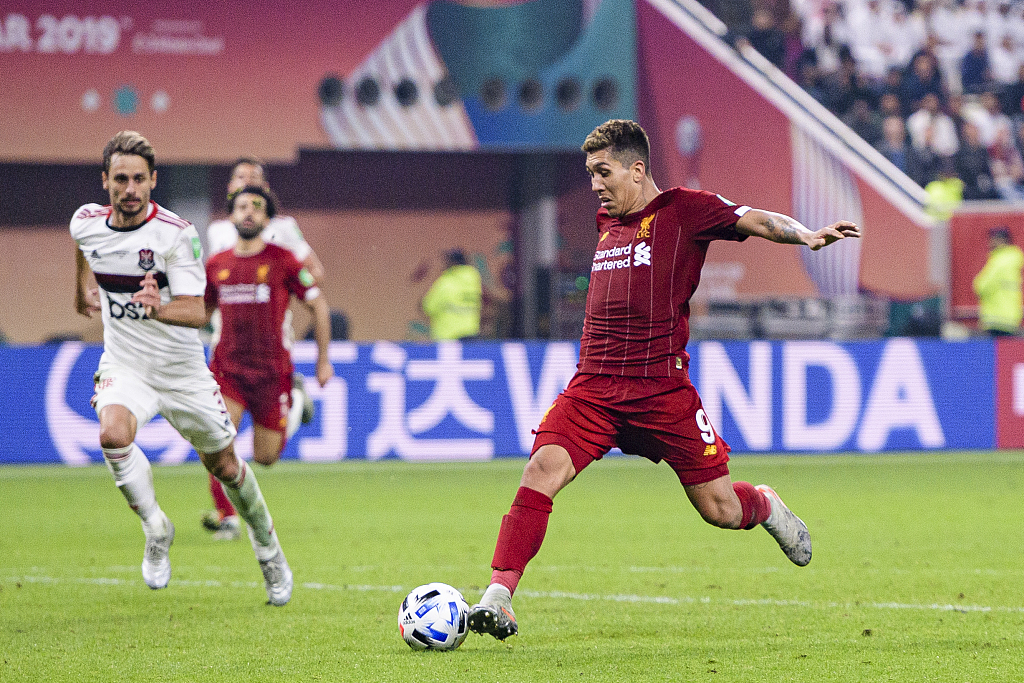 Roberto Firmino of Liverpool runs with the ball during the FIFA Club World Cup final between Liverpool and Flamengo at Khalifa International Stadium in Doha, Qatar, December 21, 2019.

The closest either side came to breaking the deadlock in normal time was when Firmino hit the post two minutes after the break and there was drama after Liverpool had a stoppage-time penalty award reversed following a VAR review.

Liverpool, with Dutch defender Virgil van Dijk returning to the side after illness, started brightly and Firmino had an early chance but blasted over.

Naby Keita was also badly off-target after being set up by Mohamed Salah, who again had his every touch roared by a large Egyptian contingent in the 45,000 crowd.

Trent Alexander-Arnold drilled a fine long-range drive just past the post as Liverpool looked to capitalise on their early domination.

But, backed by a noisy 13,000 traveling support from Brazil, Flamengo grew into the game and began to pose questions of Klopp's defence.

Joe Gomez had to make a last-ditch tackle to foil the dangerous Bruno Henrique and with skipper Everton Ribeiro dictating in midfield, Flamengo were showing exactly why they became South American champions under the wily charge of Portuguese coach Jorge Jesus. 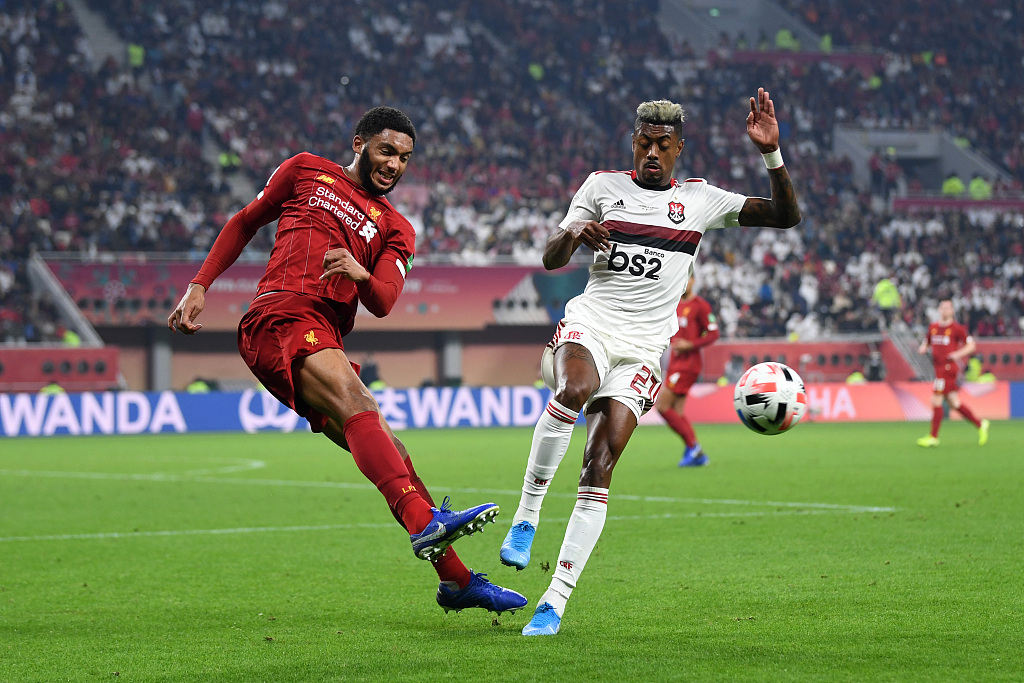 Joe Gomez of Liverpool shoots past Bruno Henrique of Flamengo during the FIFA Club World Cup final between Liverpool and Flamengo at Khalifa International Stadium in Doha, Qatar, December 21, 2019.

Liverpool regrouped at the break and they should have gone in front when Firmino chested down a pass from Jordan Henderson and created space but could only strike the post with his shot.

Midfielder Alex Oxlade-Chamberlain landed badly after an aerial challenge, hurting the same right knee which he suffered ligament damage to in 2018 and which sidelined him for a year.

The looks on the faces of the players suggested the England international's injury could be serious and another lengthy absence would be a bitter blow to the 26-year-old. 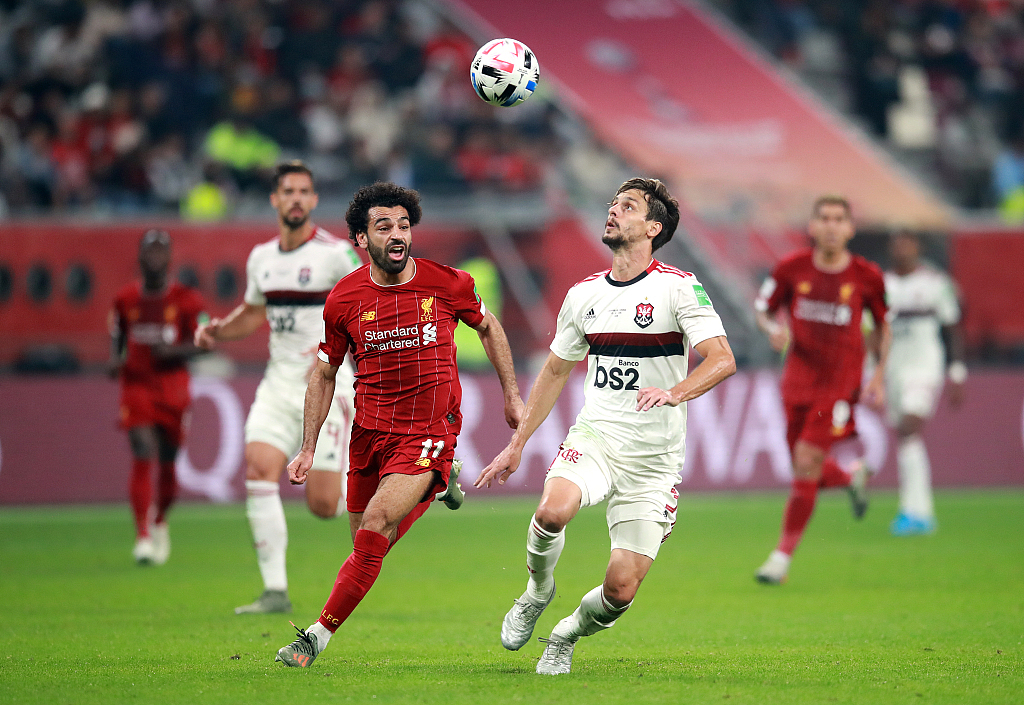 Salah had the ball in the net in the 76th minute but his effort was rightly ruled out for offside and Flamengo keeper Diego Alves was at full stretch to keep out a curling Henderson shot.

Then came the drama an interesting but not memorable game had been missing – Sadio Mane burst goalwards and Rafinha made a desperate sliding tackle from behind as the Senegalese forward fired wide.

Qatari referee Abdulrahman Al Jassim pointed to the spot, ruling the former Bayern Munich defender had fouled Mane but left the field to check the VAR monitor and changed his decision after deciding the incident occurred outside the area.

That meant 30 minutes of extra-time and the threat of a penalty shootout but the game was settled thanks to a classic Liverpool counter-attack.

Henderson found Mane with a brilliant ball and the Senegalese striker span and fed Firmino, the Brazilian calmly cutting inside, losing his marker and drilling home.

There was still time for one last opportunity but it was not to be Flamengo's night, substitute Lincoln firing over after he was picked out by a smart ball from Vitinho, and the Brazilians who had trekked from Rio to the Gulf were left to watch Klopp and his players enjoy another night of celebration.