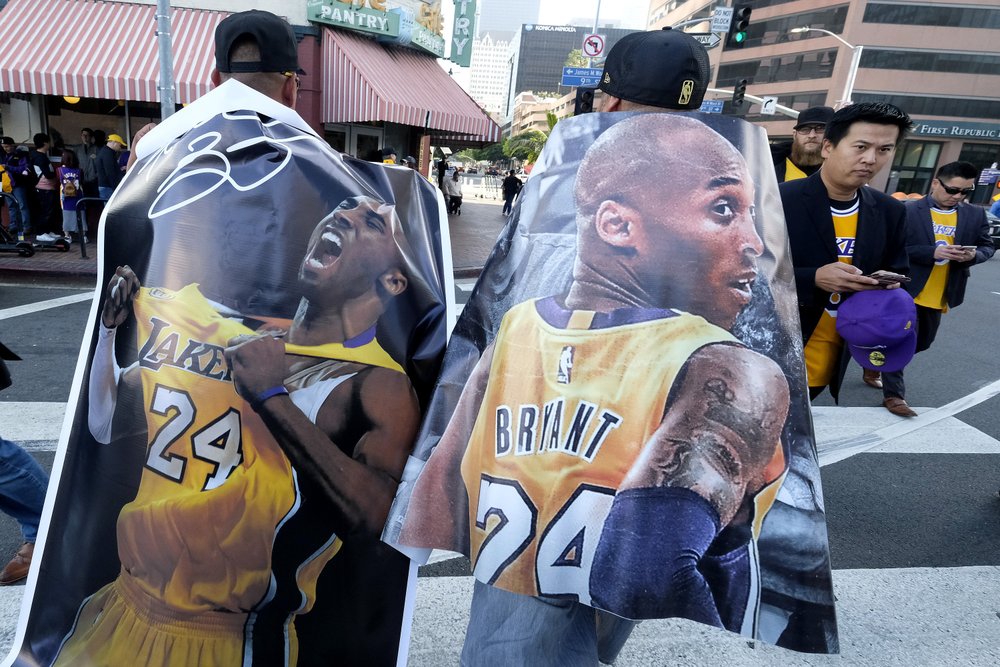 Mourners gathered Monday in downtown Los Angeles to say farewell to Kobe and Gianna Bryant, hours before a sold-out memorial service for the basketball superstar and his 13-year-old daughter was scheduled to start.

The service was to take place at the Staples Center, the arena where Bryant played for the Los Angeles Lakers for two decades. The two were among nine people killed in a Jan. 26 helicopter crash.

Among the early arriving fans was Alyssa Shapiro, 27, of Huntington Beach, who said she was inspired to become a basketball player after watching countless Lakers games with her father.

The family’s love of the game — and Bryant’s work in women’s sports — prompted her to become a middle school girls’ basketball coach. Her team had played Gianna’s team and she would watch Bryant cheer for his daughter in the stands.

Holding homemade heart-shaped “Kobe” and “Gigi” signs, she said she went up to Bryant to introduce herself at a game.

“I just wanted to thank him for being such an inspiration to me,” she said. “I grew up watching him on the screen. ... It made me realize he’s more than just that guy out on the court.”

The concourse was a sea of people dressed in the team colors of purple and yellow and others in black. On the scoreboard, the Bryant family’s life flashes by in pictures: Vanessa and Kobe, Kobe and Gianna, the whole family in costumes, Gianna on the court, baby pictures of Gianna and her father.

Fans were given a program containing photos, a purple KB pin and a T-shirt with photos of the father and daughter. The concourse is a sea of purple, gold and black clothing.

Also in the crowd was Bob Melendez, 72, who has been a season ticket holder for 40 years. After seeing Bryant play for the Lakers for years — including at his retirement game — Melendez said he could not imagine missing the memorial.

He wore a black No. 24 jersey and Lakers jacket he bought for Bryant’s final game.

“I’d never dreamed I’d be wearing this” at Bryant’s memorial, he said.

Ling, wearing a silver No. 8 jersey, said the news of Bryant’s death was initially too awful to accept.

“We didn’t want to believe it,” he said.

The service will feature speakers reflecting on Kobe Bryant’s impact on his sport and the world, along with music and retrospectives on Bryant’s on-court achievements. Bryant became active in film, television, and writing after he retired from basketball in 2016.

Bryant’s family, dozens of sports greats and many major figures in Bryant’s public life were expected to attend.

Money from ticket sales was to be given to the Mamba and Mambacita Sports Foundation, which supports youth sports programs in underserved communities and teaches sports to girls and women.

Vendors sold flowers, Lakers scarves and commemorative newspapers and jerseys. Buses drove up and down Figueroa Street with their signs lit up with “RIP KOBE.”

Business partners Donnell Dorsey and Ramon Acevedo slept along Figueroa Street on Sunday night to make sure they could claim a spot for their Lakers merchandise. Dorsey said he sold out of Bryant-related T-shirts and hats five times the day after the basketball superstar died.

On Monday, the duo sold framed photos and drawings of Bryant and Gianna for $5 apiece, T-shirts and hats for $15 each and medallions for $25.

Dorsey said a friend told him about Bryant’s death. “He was like, ’He’s gone. Gone where?”

“I was, I guess you might say, numb,” Dorsey said.

Bryant played his entire 20-year NBA career with the Lakers, including the final 17 seasons at Staples Center, which opened in 1999. The five-time NBA champion’s two retired jersey numbers — 8 and 24 — hang high above the arena where he became the third-leading scorer in league history until Lakers star LeBron James passed him on the night before Bryant’s death.

Bryant’s death caused an outpouring of grief across Los Angeles, where he remained the city’s most popular athlete into retirement. Dozens of public memorials and murals have been installed around the sprawling metropolis, and thousands of fans gathered daily outside Staples Center to commiserate after the crash.

Symbolic meanings will run throughout the ceremony, which will be held on a 24-foot-by-24-foot stage. Vanessa Bryant, Kobe’s wife and Gianna’s mother, chose Feb. 24 as the date in honor of the uniform numbers of Kobe and Gianna, who wore No. 2 on her youth basketball teams.

A private funeral was held for Kobe and Gianna Bryant in Orange County on Feb. 7.