Argentina football legend Diego Maradona was suffering from liver, kidney and cardiovascular disorders but there were no signs of alcohol or narcotics consumption in his autopsy, the public prosecutor said on Wednesday. 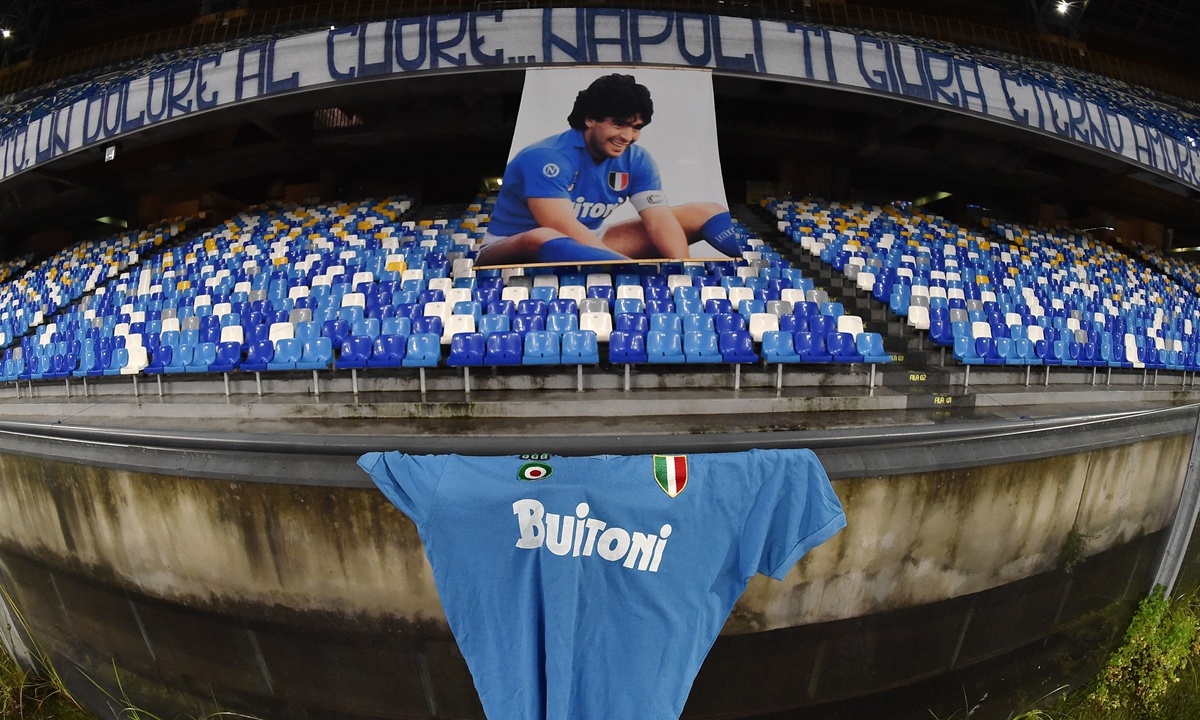 A photo of Argentine football legend Diego Maradona is placed in the stadium prior to the match between Napoli and Roma in Naples, Italy on November 29. Photo: VCG

World Cup winning captain from Mexico '86, Maradona died of a heart-attack on November 25 at the age of 60.

The public prosecutor in San Isidro, a northern suburb of the capital Buenos Aires, published the results of Maradona's autopsy late on Tuesday night.

It was ordered as part of an investigation into his death to see if there was any negligence or recklessness in the health care he was provided.

At the end of his life he was suffering from a variety of illnesses including cirrhosis, heart disease and kidney failure.

The toxicology analysis showed there was no alcohol or narcotics in his blood or urine but Maradona was ­taking anti-depressants, an anti-psychotic drug and various other medication to treat ulcers, convulsions, dependencies and difficulties in expelling waste.

Maradona had battled cocaine and alcohol addictions during his life.

"What's come out of the laboratory analysis is as important as what hasn't, which simply confirms that Maradona was given psychotropic drugs but no medicine for heart disease," one of the investigators told the Telam press agency.

Psychiatrist Agustina Cosachov and heart surgeon Leopoldo Luque are ­under investigation as they were treating Maradona before his death.

A first autopsy conducted the day Maradona died found he had suffered from liquid on the lungs with acute heart failure brought on by a disease of the heart muscles that makes it harder to pump blood.

He had undergone an operation for a bleed on the brain on November 3, just five days after his 60th birthday where he briefly attended a party in his honor at the club he was coaching, Gimnasia y Esgrima, although he appeared to be in poor health.

Maradona was widely regarded as one of the greatest footballers of all time.

He is a legend in his homeland having been instrumental in guiding them to World Cup glory in 1986 and then again to the final in Italy four years later.

He is also an icon in Naples were as a player he helped Napoli win the only two Serie A titles in their history.

He had much less success as a coach, taking Argentina to the World Cup quarterfinals in South Africa in 2010 before embarking on a nomadic journey that took him to the United Arab Emirates and Mexico.