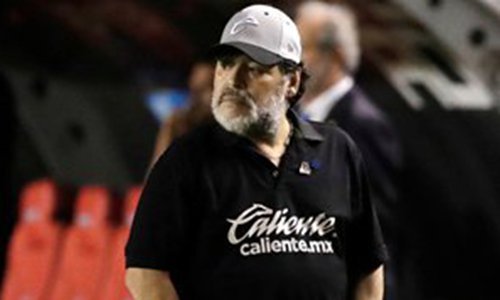 Dorados coach Diego Maradona during the match against Atletico San Luis on May 5 in San Luis Potosi, Mexico. Photo: VCG

"We managed to successfully remove the clot. Diego coped well with the surgery," Leopoldo Luque said at the icon's private clinic in the capital Buenos Aires.

"It's under control, there's a little drainage [of blood]. He'll remain under observation."

World Cup winner Maradona had been taken to hospital in La Plata - where he is the coach of Gimnasia y Esgrima - on Monday for a series of tests after feeling unwell.

A scan revealed the blood clot, and on Tuesday he was transferred to the specialist clinic in a northern neighborhood of the capital.

Maradona, who turned 60 on Friday, has suffered ill health before. He has survived two heart attacks, and also contracted hepatitis and undergone gastric bypass surgery.

Groups of fans congregated outside the clinic with banners showing Maradona's face and the words "Come on, Diego!"

Earlier on Tuesday, Luque insisted it was "a routine operation" and that Maradona was "lucid" and "calm."

"The operation consists of a small incision to drain the blood. In 24 or 48 hours the patient can leave the hospital," neurosurgeon Raul Matera told TyC Sports channel.

Maradona was transferred from the hospital in La Plata, 60 kilometers south of Buenos Aires, to the capital at 6 pm accompanied by one of his daughters, Giannina.