DOHA, Dec. 15 (Xinhua) -- As well as being the man of the match in France's 2-0 semifinal win over Morocco and arguably a good candidate for player of the tournament, France's Antoine Griezmann made an excellent tactical point in the wake of Wednesday night's win.

Following his all-action display, in which he seemed to be everywhere at once, Griezmann highlighted a substitution made by coach Didier Deschamps when the French were under the most pressure from their rivals, with the score still 1-0. 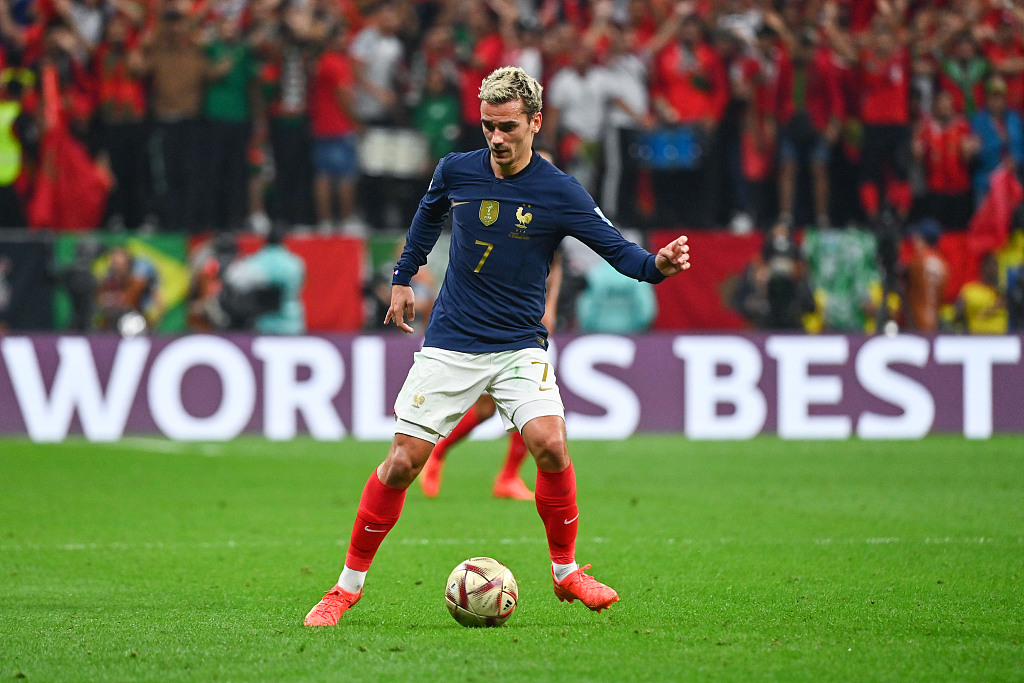 Deschamps took off Oliver Giroud and introduced Marcus Thuram on the left of the French attack, pushing Kylian Mbappe into a more central role.

Griezmann highlighted that Thuram had given support to French left back Theo Hernandez, who had struggled to contain the forward surges of Achraf Hakimi, Hakim Ziyech and Azz-Eddine Ounahi.

One of the main reasons, Hernandez struggling at times in defense was because he was given so little cover from the man who played in front of him for much of the game: Kylian Mbappe. 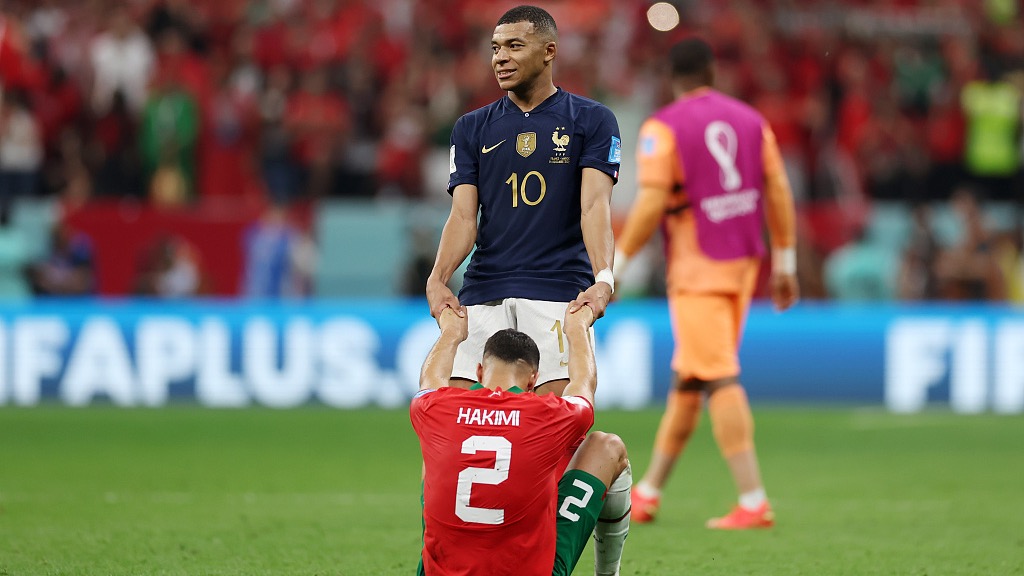 There is absolutely no doubting Mbappe's attacking talent, as he showed with his penalty area shuffle that helped set up Randal Kolo Muani for France's second goal of the game.

When Mbappe presses the accelerator, as he did on a couple of occasions on Wednesday, or against Poland in the last 16, he is almost unstoppable (at least without fouling him). 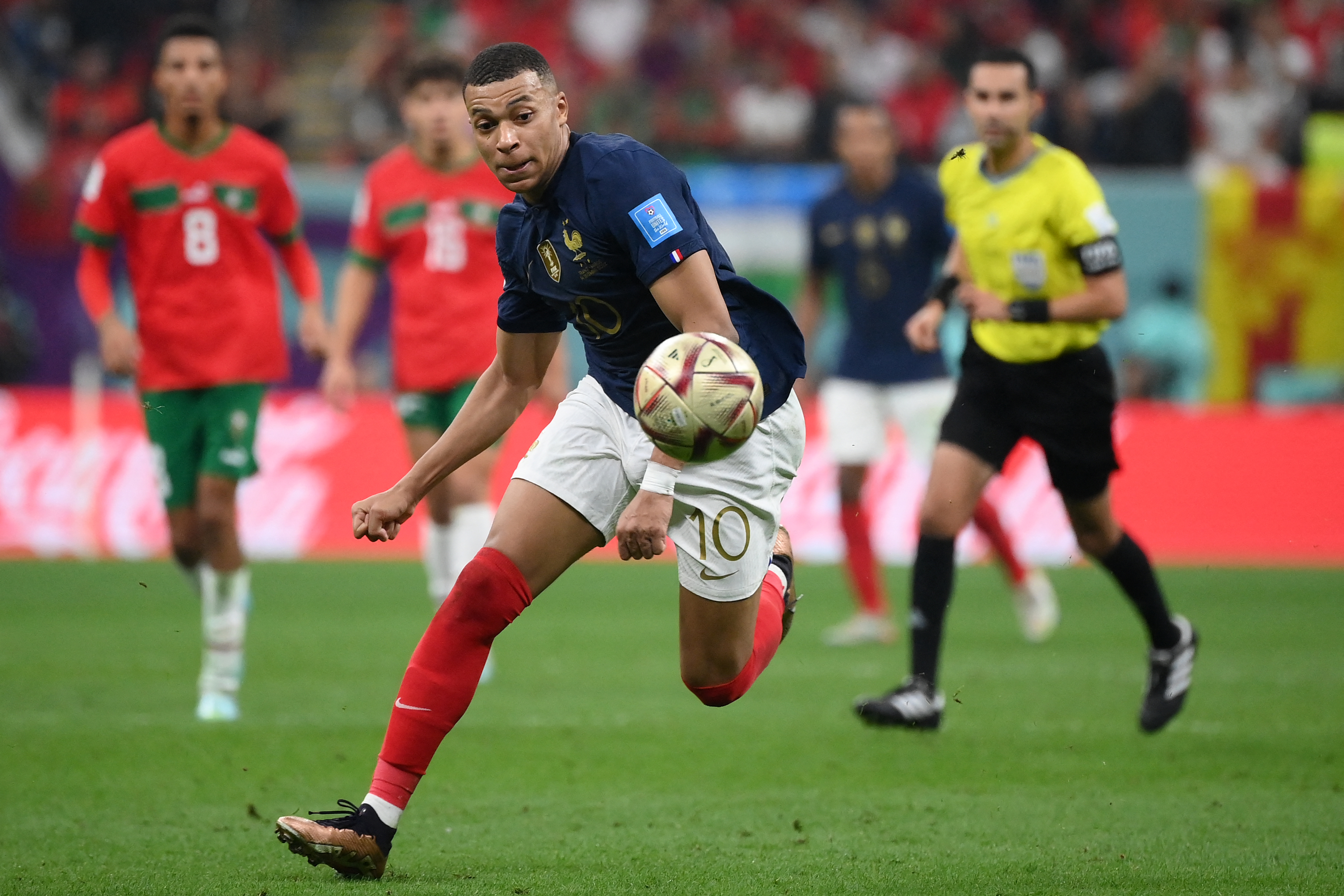 France's forward #10 Kylian Mbappe runs after the ball during the Qatar 2022 World Cup semi-final football match between France and Morocco at the Al-Bayt Stadium in Al Khor, north of Doha on December 14, 2022. (Photo: AFP)

He has scored five goals in the World Cup and one of the highlights of Sunday's final will be whether (Giroud obliging) he or Messi will win the Golden Boot for the top scorer in this World Cup.

Argentina boss Lionel Scaloni has already showed his tactical flexibility; switching to a back five to counter the Netherlands' wing-backs and then playing with four in midfield to stifle Croatia's creativity in the middle of the park.

He will have identified as England and Morocco both did that. Mbappe offers them a chance for the right full back to overlap and to create two-on-one situations against left-back Hernandez.

Des Walker and Bukayo Saka combined time and again in the quarter-final and it was no coincidence Saka was England's man of the match and won the penalty that allowed Harry Kane to temporarily make it 1-1.

All too often Hernandez found himself trying to cover two players at the same time and the fact France have only two men in central midfield meant neither Adrien Rabiot nor Aurelien Tchouameni were able to provide the needed cover and when Tchouameni did get across, it was to bring Saka down in the area.

Morocco worked to exploit the same weakness, with Achraf especially dangerous and France were very lucky they didn't score from situations generated in that position more than once, with Mbappe a virtual spectator in the middle of the park.

Scaloni will have seen this. He will be telling right back, Nahual Molina to get into that space as he did against the Netherlands and Lionel Messi will drop right when needed and you don't need reminding of what he did to Croatian defender, Josko Gvardiol when they were one on one on that same flank.

It will be a busy evening for Theo Hernandez.

So: Didier Deschamps has a dilemma ahead of Sunday's final. Mbappe can win France the game - if he has the chance to run at Otamendi, there will only be one winner - there is no doubt about that, but unless he tracks back and helps Hernandez, he could also help lose them the match as Messi and company target the exposed left back.

Should Deschamps drop Giroud and play Mbappe in the middle and allow Thuram to provide cover down the flank? But how does he drop an in-form Giroud, who will be important against an Argentina defense that isn't great defending high balls in their area?

It looks as if Griezmann will have to find yet another place to be on the pitch of the Lusail Stadium.