Rory McIlroy won the RBC Canadian Open on Sunday and gave the PGA Tour a strong response to the start of the Saudi-funded LIV Golf Invitational, closing with an 8-under 62 to win a wild race to the finish with Justin Thomas and Tony Finau. 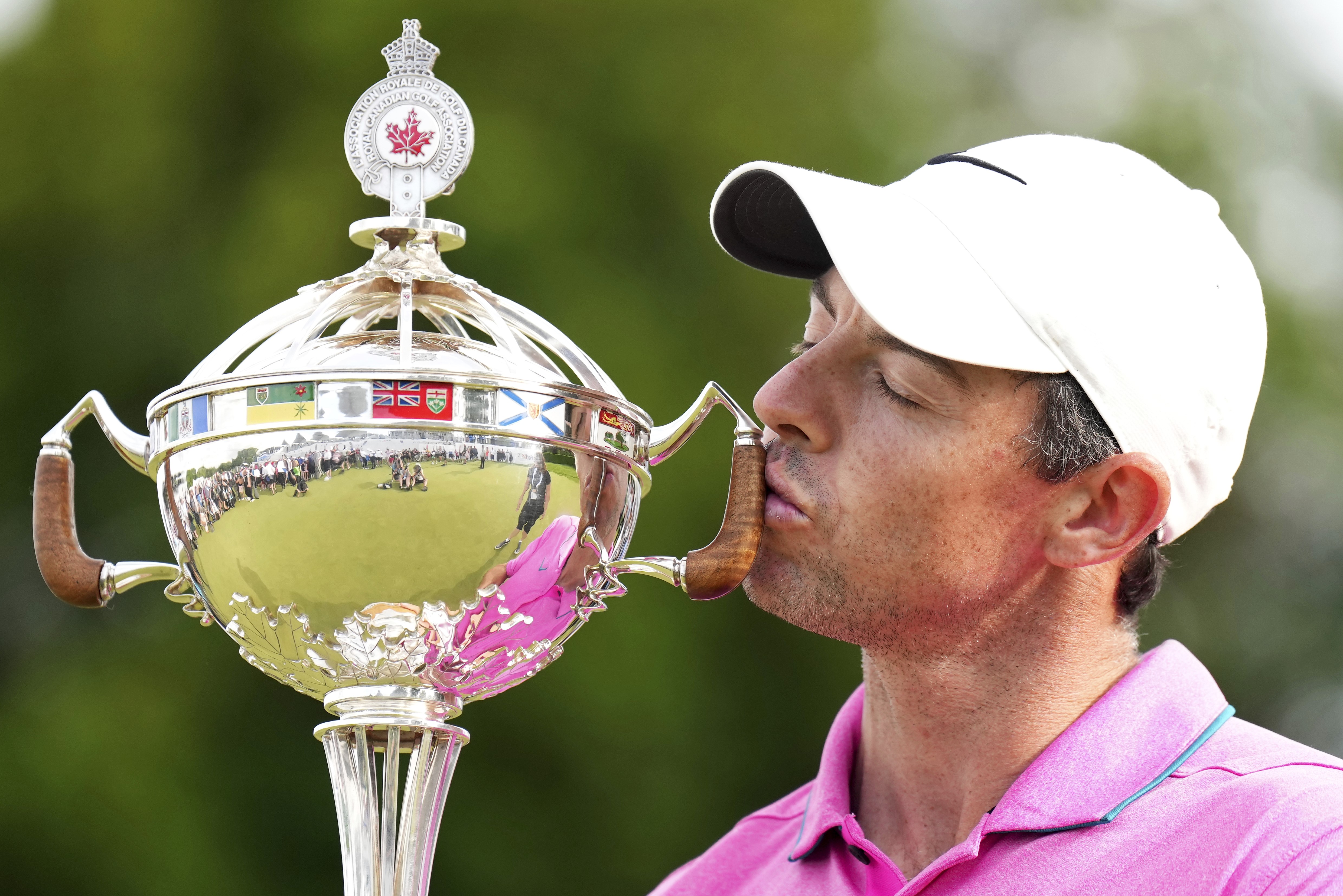 Rory McIlroy, of Northern Ireland, kisses the trophy after winning the final round of the Canadian Open golf tournament at St. George's Golf and Country Club in Toronto, Sunday, June 12, 2022. (Photo: AP)

McIlroy had his first title defense on the PGA Tour, even if he had to wait for it. He won golf’s fourth-oldest national open in 2019 at Hamilton Golf & Country Club, only for the the COVID-19 pandemic to cancel the next two editions.

Thomas pushed him to the end at St. George's Golf & Country Club, and the tournament effectively ended on the 17th hole. McIlroy and Thomas were tied and in the rough. McIlroy hit a wedge that rolled out to tap-in range, while Thomas missed a 10-foot par putt, a two-shot swing. Thomas closed with a pair of bogeys and still shot 64.

McIlroy finished at 19-under 261 for a two-stroke victory.

“I feel like it’s getting tougher and tougher to win on the PGA Tour,” McIlroy said. “Just look at the two guys that I played with today. I went out with a lead and had to shoot 8-under par to get the job done. So the depth of talent on this tour is really, really impressive. And going up against guys like J.T. and Tony and coming out on top, that’s something to feel really good about.”

Finau holed a 40-foot birdie putt on the 18th for a 64 to finish second alone.

“Rory played great,” Finau said. “He closed it out and hat’s off to him on a week like this. That’s fantastic playing on the weekend. I played great, he just played a couple shots better.”

Thomas was third at 14 under. Justin Rose matched the tournament- and course-record with a 60 — with three eagles and three bogeys — to tie for fourth with Sam Burns (65) at 14 under.

“It was really cool to be a part of and just really happy to get the win today and obviously sets me up well going into next week in Boston,” McIlroy said. “But right now I just want to enjoy this and focus on this.”

McIlroy has been one of the strongest opponents of the LIV Golf series and spoke out against the money being paid to players like Phil Mickelson and Dustin Johnson. Greg Norman, who runs the LIV Golf, said in a story in the Washington Post that McIlroy had been “brainwashed” by the PGA Tour.

McIlroy won for the second time this season, adding to his October win in Las Vegas in the CJ Cup. He won for the 21st time on the PGA Tour.

“This is a day I’ll remember for a long, long time,“ McIlroy said soon after the victory. “Twenty-one PGA Tour wins, one more than somebody else.”

It was a dig at Norman, who had 20 career tour wins.

McIlory repeated the jab later in the his main interview session when his victory total and accomplishments were noted in his introduction, saying: “And one more than Norman.”

“I had extra motivation of what’s going on across the pond,” McIlroy said. “The guy that’s spearheading that tour has 20 wins on the PGA Tour and I was tied with him and I wanted to get one ahead of him. And I did. So, that was really cool for me, just a little sense of pride on that one.”

“I’m totally disappointed, because you know what’s at stake, for sure,” Rose said. “I never shot 59 before, so it would have been a lovely footnote on the week."

"I don’t know how much was in my control or not, but we were right in between two clubs and I went the wrong way on a decision and paid the price for it,” he said.

Corey Conners was the top Canadian, shooting a 62 to finish sixth at 12 under.

“Felt like the last few days I played really solidly," Conners said. "Just last few weeks even, just hadn’t maximized the game, hadn’t got as much out of the game as I wanted. Definitely, nice to have low round today. Played really well. Definitely, felt it coming.”