SPORTS Medvedev knocked out of Australian Open by 'thrilled' Korda

Medvedev knocked out of Australian Open by 'thrilled' Korda 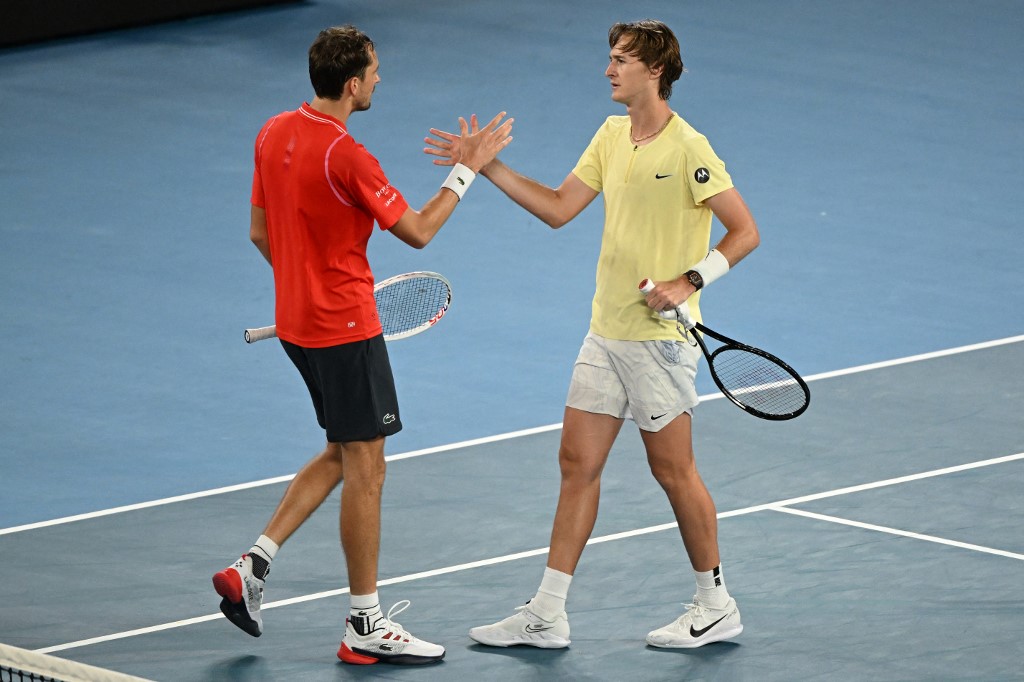 Sebastian Korda (R) of the US greets Russia's Daniil Medvedev are winning their men's singles match on day five of the Australian Open tennis tournament in Melbourne on January 21, 2023. (Photo: AFP)

"An unbelievable match, I sort of knew what I had to do and I stuck with it even when I was going up and down with the emotions," said the 22-year-old Korda, adding that his game plan was "just go for it".

Medvedev was a losing finalist at the last two Australian Opens, to Novak Djokovic in 2021 and then in a demoralising five-set defeat 12 months ago against Rafael Nadal after leading by two sets.

He was attempting to become only the fourth man in the Open era to reach three consecutive Melbourne Park finals after Djokovic, Mats Wilander and Ivan Lendl.

But that quest is now over as he joined defending champion Nadal, second seed Casper Ruud and eighth seed Taylor Fritz as high-profile first-week casualties at the season-opening Grand Slam.

Djokovic remains in the hunt for a 10th title, but has a hamstring injury and confessed on Thursday he was "worried" it could derail his tournament.

Korda displayed his credentials when he pushed Djokovic to the brink in the Adelaide International final this month, earning a championship point before the Serb rallied to win in three close sets.

The Florida native bounced back to claim a pair of victories in Melbourne against Cristian Garin and Yosuke Watanuki before meeting former world number one Medvedev.

Korda started aggressively, earning four break points in an 11-minute opening game before putting one away to take an early edge.

The Russian had minor treatment on his right hand at the changeover before Korda consolidated for 2-0.

The American dominated from the baseline in some lung-busting rallies and broke again for 4-1, before the Russian came roaring back with two breaks to level it up at 4-4.

It went to a thrilling tiebreak with Korda converting on his third set point after an 85-minute slugfest.

Korda, coached by former Czech star Radek Stepanek, broke early again in the second set with Medvedev having no answers this time.

He began the third in the same vein, breaking immediately as the Russian wilted under the onslaught.

Medvedev again rallied to take it to another tiebreak before exiting the tournament at the earliest stage since 2018.