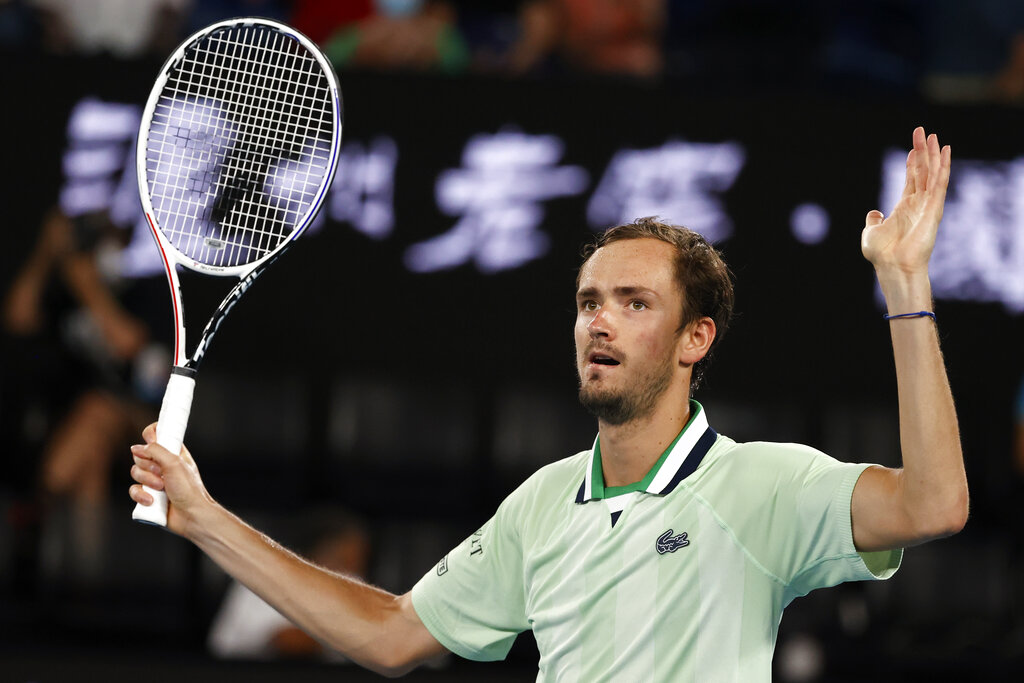 Daniil Medvedev of Russia reacts after winning the fourth set against Felix Auger-Aliassime of Canada during their quarterfinal match at the Australian Open tennis championships in Melbourne, Australia, Wednesday, Jan. 26, 2022. (Photo: AP)

Auger-Aliassime sent an early message to his Russian opponent after taking the first set in a tiebreak where Medvedev was able to make a return break to even out the score but succumbed to the 21-year-old's brutal backhands.

The Canadian young gun carried this momentum into set two, making an early break against an increasingly frustrated Medvedev.

Maintaining an exceptional 83 percent first-serve rate, compared to just 55 percent from Medvedev, and a first-serve win rate of 85 percent, Auger-Aliassime closed out the set unbroken and established a two-set lead.

Both players consolidated their service game in set three, refusing to be broken, putting the Canadian's chance to wrap up the game on a final tiebreak.

A sudden bout of rain interrupted the tiebreak on point four, only adding to the already sky-high tension. But Medvedev returned with vigor, winning the tiebreak 7-2 to stay in the match.

In the fourth set, the 25-year-old US Open champion shifted the pressure onto his Canadian opponent, narrowly avoiding a break before returning with his own in the 11th game. He leveled the match 2-2 with a lightning-fast, 207km/h ace.

In set five, as the game dragged into its fourth hour, Auger-Aliassime seemed to be on shaky ground, calling for medical assistance for his ankle after forfeiting an early third game break to Medvedev.

Both players held their service throughout the set, but Medvedev won out his last point, finalizing what was likely his most enthralling turnaround to date.

"I was not playing my best, and Felix was playing unbelievable, he was all over me. I have no idea [how I hung in there]," Medvedev said of his shaky first two sets after the match.

"I just fought to the last point and managed to raise my level for the next game."

The Russian will now go on to face Greece's world No. 4 Stefanos Tsitsipas, who also secured his place in the semifinal on Wednesday, taking down Italian world No. 10 Jannik Sinner in straight sets, 6-3, 6-4, 6-2.