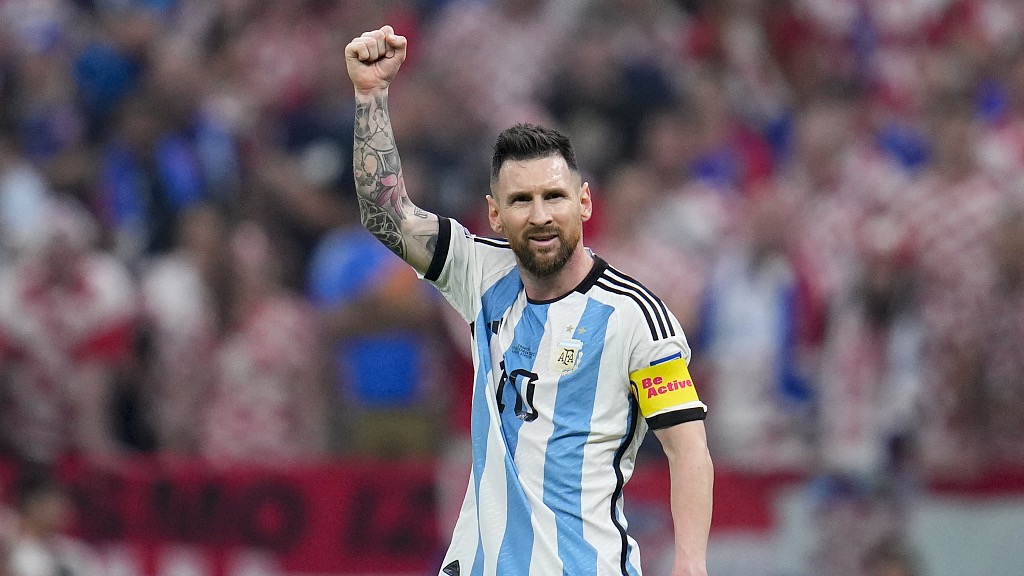 Josko Gvardiol would probably remember this jaw-dropping moment for the rest of his life.

The 20-year-old linchpin of Croatia's authoritative defensive line is considered as the world's most promising and top-rated center-back. He repelled the relentless threats of ferociously talented superstars, such as Kevin De Bruyne and Neymar, edging out Belgium and then Brazil along the way. He led his team to fight back from the brink of elimination on several occasions at this World Cup. He refused to lose and never knew defeat. Not until he crossed paths with Lionel Messi.

As the clock ticked into the 69th minute of the feisty semifinal between Croatia and Argentina, Messi picked up the ball on the halfway line and sprinted away from Gvardiol with sensational ease and deftness. The 35-year-old maestro then stopped, waiting for the burly defender approaching, and seized the opportunity to dance past him once again. 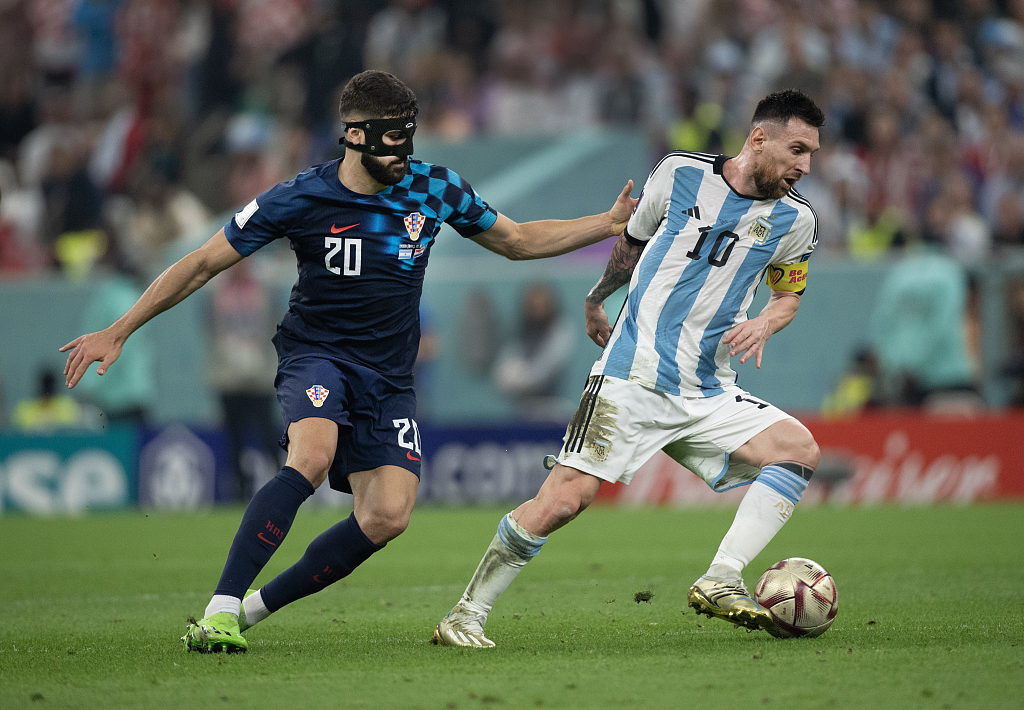 Lionel Messi (R) of Argentina dribbles past Josko Gvardiol of Croatia during their World Cup clash at the Lusail Stadium in Lusail, Qatar, December 13, 2022. (Photo: CFP)

To Gvardiol's credit, he recovered his composure to quicken his pace and attempted to nudge Messi to the byeline. Much to his chagrin, however, the ageless wizard slalomed his way past him for the third time in just a few seconds before setting up Julian Alvarez for Argentina's third goal of the night. Gvardiol was exposed, destroyed and helpless. So were Croatia. One could do nothing but marvel at Messi's masterpiece that finally put the game to bed.

It was always going to be a history-making night for Messi. The seven-time Ballon d'Or winner equaled German legend Lothar Matthaus' all-time World Cup appearance record (25) when he set foot on the Lusail Stadium in Qatar. He has scored in each knockout round before the encounter with Croatia, and facing the opponent who thrashed his team 3-0 four years ago in Russia, the Argentina captain took matters into his own hands.

Despite coming under immense pressure to restore his country to its former glory, Messi twisted and turned, completing mazing runs and scintillating dribbles right from the start. He duly broke the deadlock from the penalty spot at the half hour mark after Alvarez was fouled by Croatia goalkeeper Dominik Livakovic. It was his 11th World Cup goal and he surpassed Gabriel Batistuta to become Argentina's all-time top scorer in the showpiece tournament. He has also become the oldest footballer to score five goals at a single World Cup. 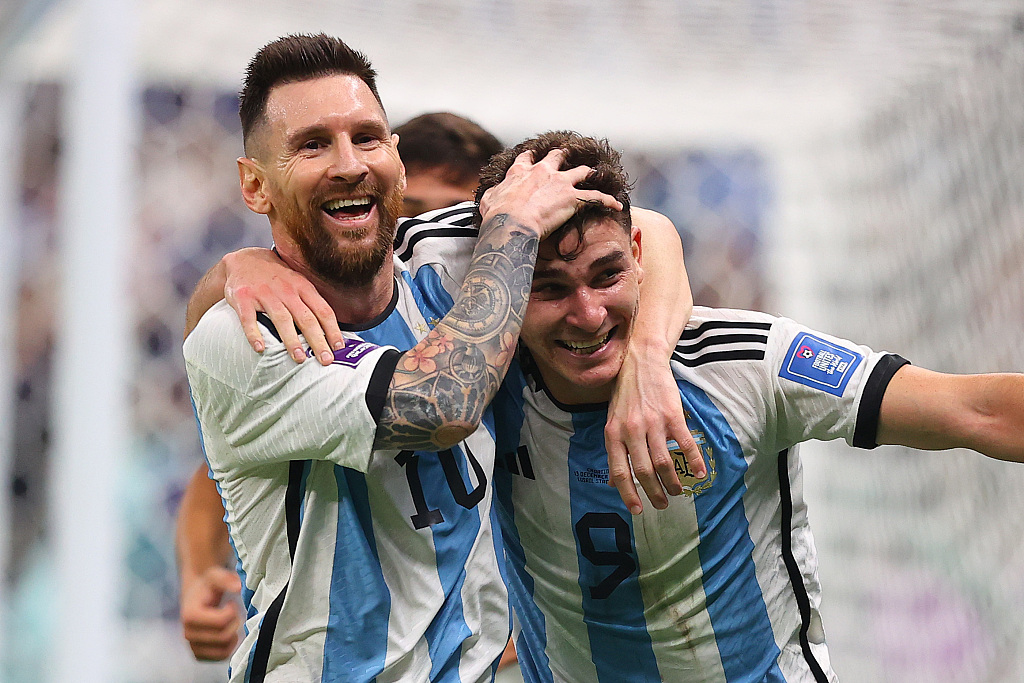 The 22-year-old Alvarez would double Argentina's lead five minutes later with an incredible solo effort, and would eventually become the second-youngest Argentinian to score multiple World Cup knockout-round goals in 92 years after blasting home Messi's pullback on the byeline.

Until last year, major tournaments were a source of depression and pain for Messi. The 2021 Copa America title brought a much-needed relief and balm. And now he is one win away from emulating Diego Maradona, who drove Argentina to become world champions in 1986.

"Whether Messi is the greatest of all time ... I don't have any doubt," beamed Argentina coach Lionel Scaloni afterwards. "I have been saying this all the time with my staff. Every time you see him playing, it is a huge motivation for his teammates. There is nothing left to say about Messi. It is a privilege to have him." 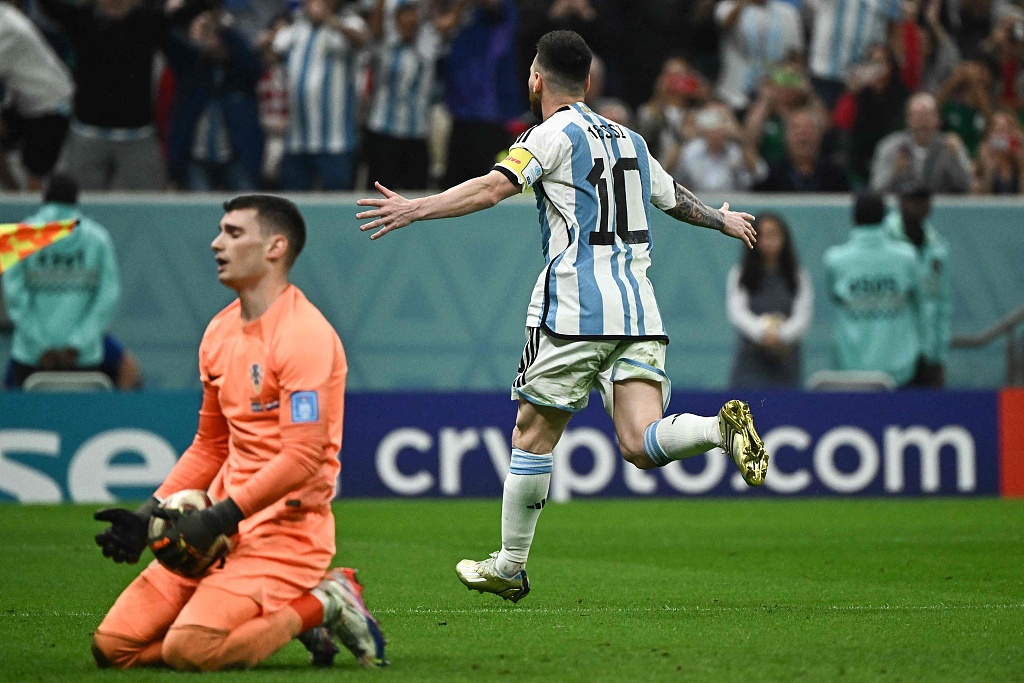 It is also a privilege to have Scaloni. The humble tactician has shown admirable flexibility and flawless people management skills throughout the tournament. He took the bold decision to ditch Inter Milan old timer Lautaro Martinez and put faith in Manchester City youngster Alvarez, which allowed them to grind out wins against Mexico, Poland, Australia and the Netherlands.

Tasked with penetrating one of the world's best midfield led by Croatia's greatest-ever player Luka Modric, Scaloni changed the tactics and went for a 4-4-2 that encouraged the full-backs to press high and limited opponents' counter-attacking prowess. It worked perfectly and kept Modric, who has a record 161 caps for Croatia, at arm's length.

The 2018 Ballon d'Or winner, nevertheless, remained defiant after being overshadowed by Messi and his high-flying Argentina. "We're sad, we were hoping to play another final. It didn't happen. We have to congratulate Argentina and that's it," Modric told reporters.

"We've had a very good World Cup and it's never a punishment to play for the national team," he added. "There's a bronze at stake, so we need to be ready because it's a good result if we get it." 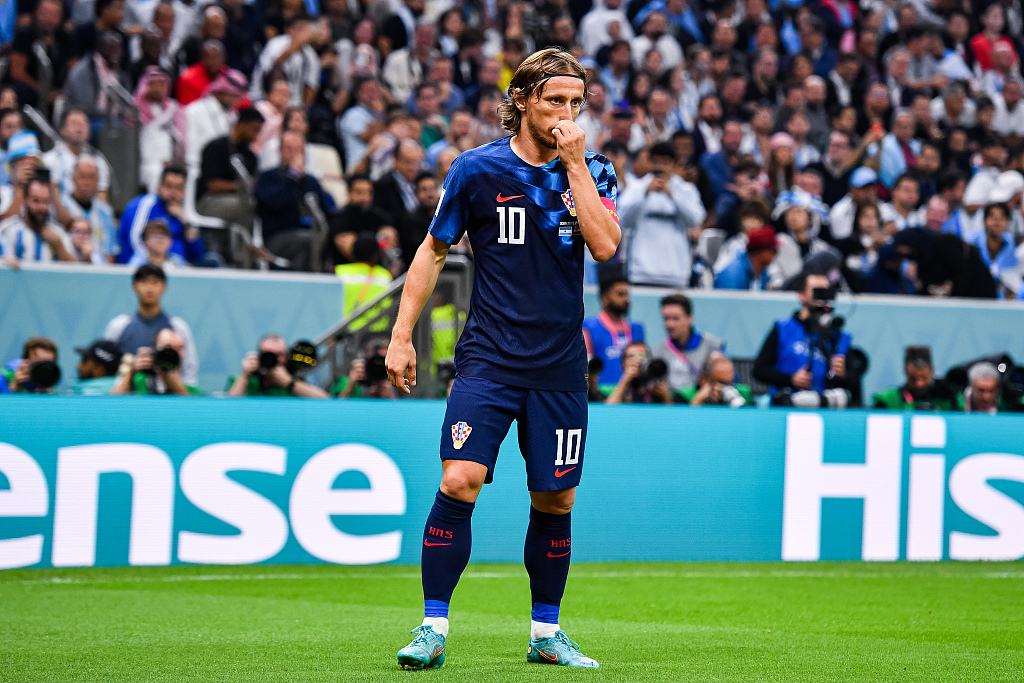 For Messi, however, the dream of reaching the pinnacle in his illustrious career is still alive.

"We didn't think we would lose versus Saudi Arabia. To start in such a way was an acid test for the squad. But this squad proved how strong we are. Every match was a final," declared Messi in a press briefing. "We have played five finals and have won five finals. I hope this will be the way in the final game. We were confident we would make it as we knew what we are capable of."

In 2014, Messi heartbreakingly came up short in the Brazil World Cup final after falling to Germany in extra time. After an eight-year build-up and ups and downs, the Qatar campaign has the final act it so craved. Will Messi finally clinch the only trophy that has so far eluded him and cement his status as the finest player to ever grace the beautiful game in his one last shot at redemption?

The whole world will hold their collective breath.