Lionel Messi scored one goal and created two others as Argentina beat Ecuador 3-0 in Goiania on Saturday to reach the Copa America semi-finals. 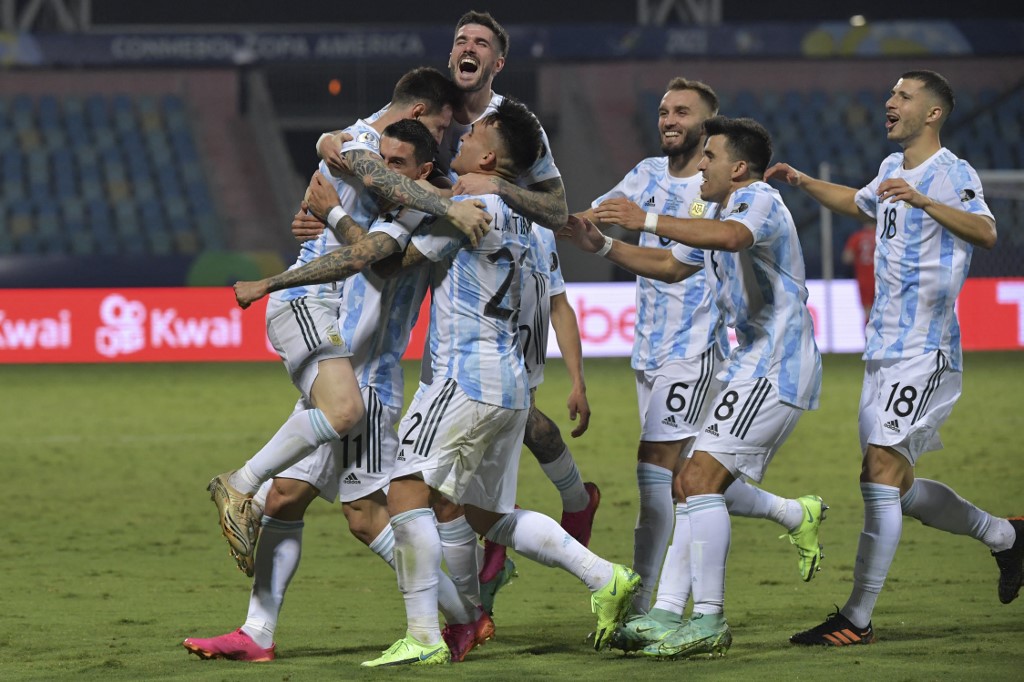 In Tuesday's last four match, the 14-time winners will play Colombia, who beat Uruguay on penalties earlier in the day.

The scoreline was harsh on Ecuador, who ended the game with 10 men after Pedro Hicapie's dismissal but had been competitive throughout.

Argentina made a bright start and Martinez almost opened the scoring with a moment of brilliance. He chipped the ball over goalkeeper Hernan Galindez and then volleyed goalwards, only for Robert Arboldea to block the ball on the line.

Moments later Martinez had a shot deflected wide and from the resulting corner, German Pezzella volleyed into the side netting.

Carlos Gruezo almost gifted Argentina a goal when his attempted back pass sent Messi clean through with only Galindez to beat, but the six-time Ballon d'Or winner saw his shot cannon back off the post.

Up the other end, goalkeeper Emiliano Martinez had to be alert to parry a stunning 20-yard volley by Sebastian Mendez.

Argentina had their own let off seven minutes from half-time when Pervis Estupinan crossed from the left and Enner Valencia's flicked header narrowly evaded the sliding Alan Franco at the back post.

Two minutes later Argentina were in front, with Messi the architect.

First he played in Nicolas Gonzalez on goal but when he was tackled by Galindez, Messi reacted quickest and teed up De Paul to score.

There was still time before the break for Galindez to make an incredible double save from Gonzalez, before Valencia somehow headed wide from six yards out.

After the break, Valencia remained Ecuador's most likely route back into the match and the livewire forward's near post shot hit Martinez's leg before going behind.

A wicked Estupinan cross was then almost turned into his own net by Gonzalez.

Messi came close to killing off the tie but his curled effort sailed just past the post, while Aston Villa goalkeeper Martinez denied substitute Gonzalo Plata an equaliser with a near-post block.

And Hincapie completed a miserable few minutes as he was dismissed in injury time after dragging back substitute Di Maria when clean through, with Messi despatching the free-kick.

Goalkeeper David Ospina was the hero as Colombia beat Uruguay on penalties in Brasilia.

Ospina saved two spot-kicks in the shoot-out on the day he earned his 112th Colombian cap, moving clear of the previous national record he shared with the iconic Carlos Valderrama.

He dedicated the victory to his civil strife-torn country that would have been one of the twin hosts alongside Argentina before South American football's governing body CONMEBOL moved the tournament to Brazil over coronavirus pandemic concerns and social unrest in Colombia.

"We just want to give joy to our country, a country we want to be full of peace, full of people sharing and enjoying, because we have a beautiful country," said Ospina, 32.

There was little to report in a drab 0-0 draw over the regulation 90 minutes before the quarter-final tie went straight to penalties.

Ospina saved from Jose Gimenez and Matias Vina while Colombia scored all four of their penalties.

It was a huge disappointment for Uruguay's star forward pair Edinson Cavani and Luis Suarez, who both converted their spot-kicks but almost certainly have played in their last Copa.

On Friday, Brazil beat Chile 1-0 to reach Monday's semi-final against Peru, who defeated Paraguay 4-3 on penalties after an eventful 3-3 draw that saw both sides finish with 10 men.