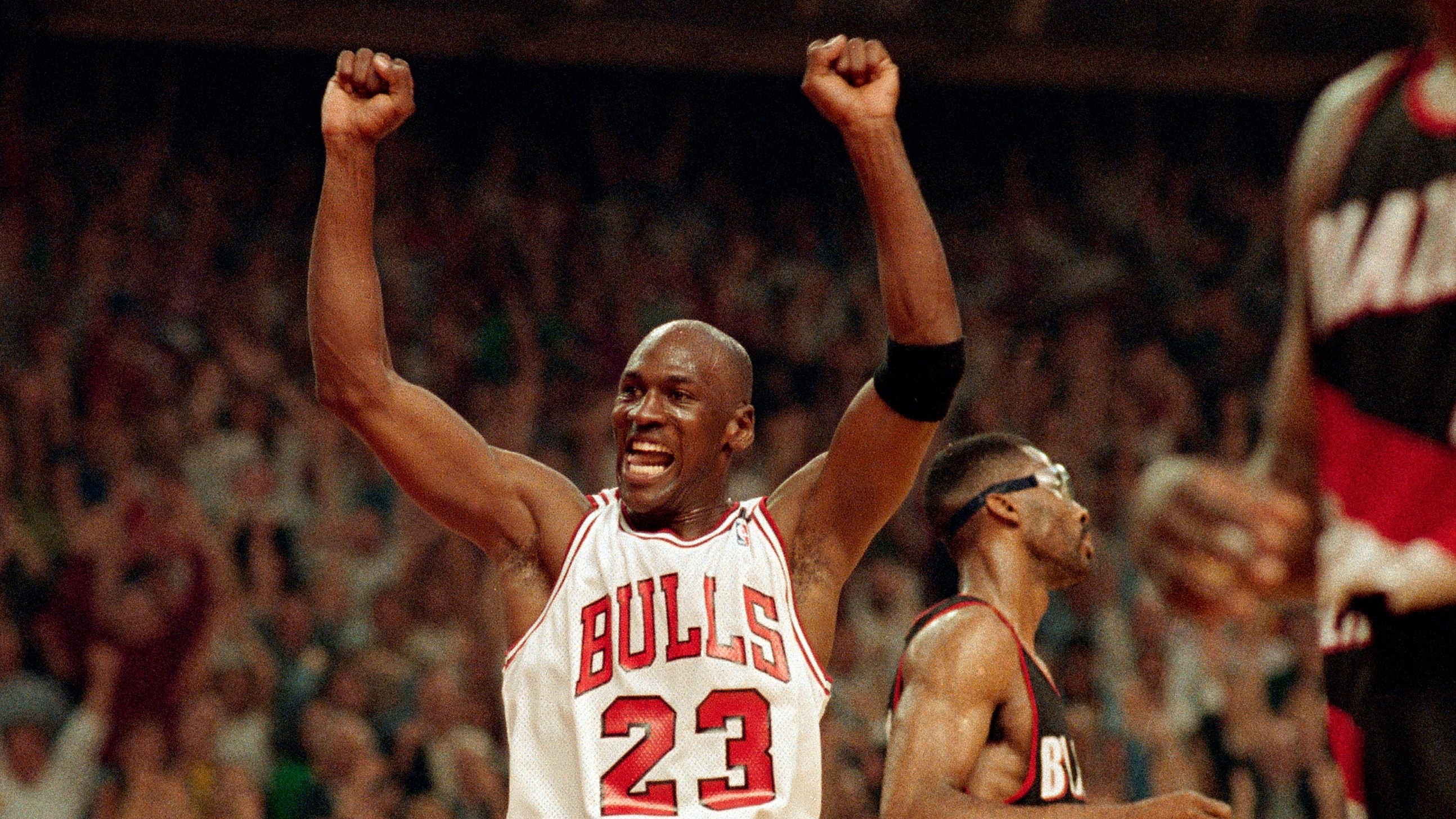 Michael Jordan, #23 of the Chicago Bulls, celebrates victory in Game 6 of the NBA Finals against the Portland Trail Blazers at the United Center in Chicago, Illinois, June 14, 1992. (Photos: AP)

Having won his first title, Michael Jordan should have enjoyed more the summer of 1991 and the following season, if it wasn't for the press that kept putting everything about him under microscope.

Sam Smith wrote the book "The Jordan Rules" in which he described the Bulls No. 23 as a villain who kept bullying his teammates, making things hot for the front office and was desperate to flatter his vanity.

The book was so biased that it did not draw much sympathy from the rest of the media world. Nonetheless, that did not keep them from comparing Jordan, who already proved he's the best player in the league, to other great names in history. Did he shoot better than Larry Bird? Could he pass better than Magic Johnson? 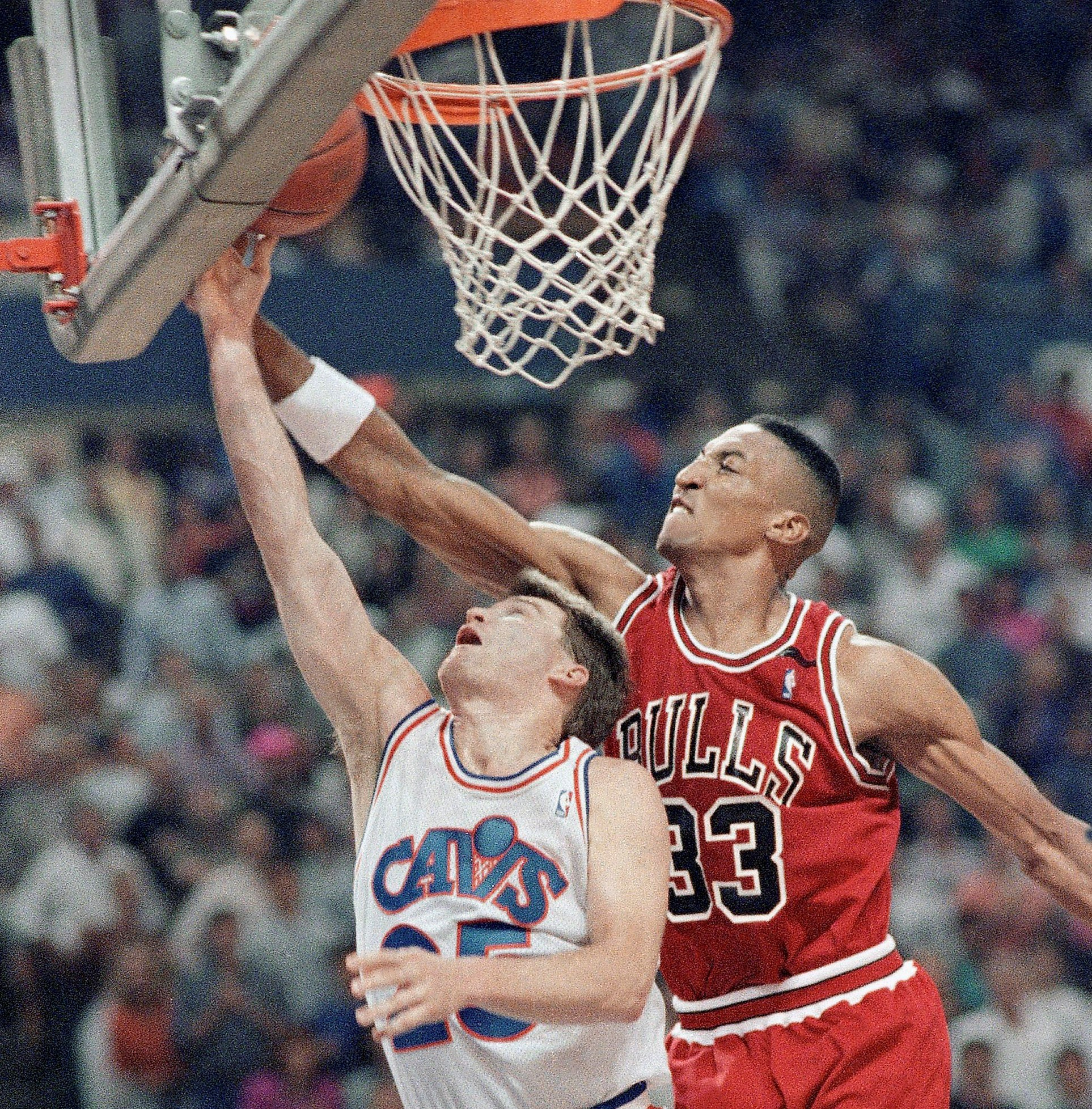 Scottie Pippen, #33 of the Chicago Bulls, blocks a shot by Mark Price of the Cleveland Cavaliers in Game 6 of the Eastern Conference Finals at the Richfield Coliseum in Cleveland, Ohio, May 29, 1992.

Fortunately, Jerry Krause did not take Chicago's champion squad apart and Scottie Pippen continued to get better. More fans recognized him and they voted for him to be an All-Star starter. Having averaged 21.7 points, 7.7 rebounds, 7.0 assists, 1.9 steals and 1.1 assists, Pippen made the All-NBA Second Team and the All-Defensive First Team.

Thanks to the growth of his teammates, Jordan saw the burden on his shoulder drop by a lot. He pocketed his sixth scoring championship, continued to remain in the two First Teams and received the third NBA MVP award. The Bulls finished the regular season with a franchise record of 67 wins.

The team swept the Miami Heat in the first round 3-0. Pat Riley and the mobsters he brought to the New York Knicks were like clones of the Detroit Pistons' Bad Boys. Their defense caused Jordan enough trouble before they were defeated in seven games. In the Eastern Conference Finals, Jordan again conquered the Cleveland Cavaliers like he always did. 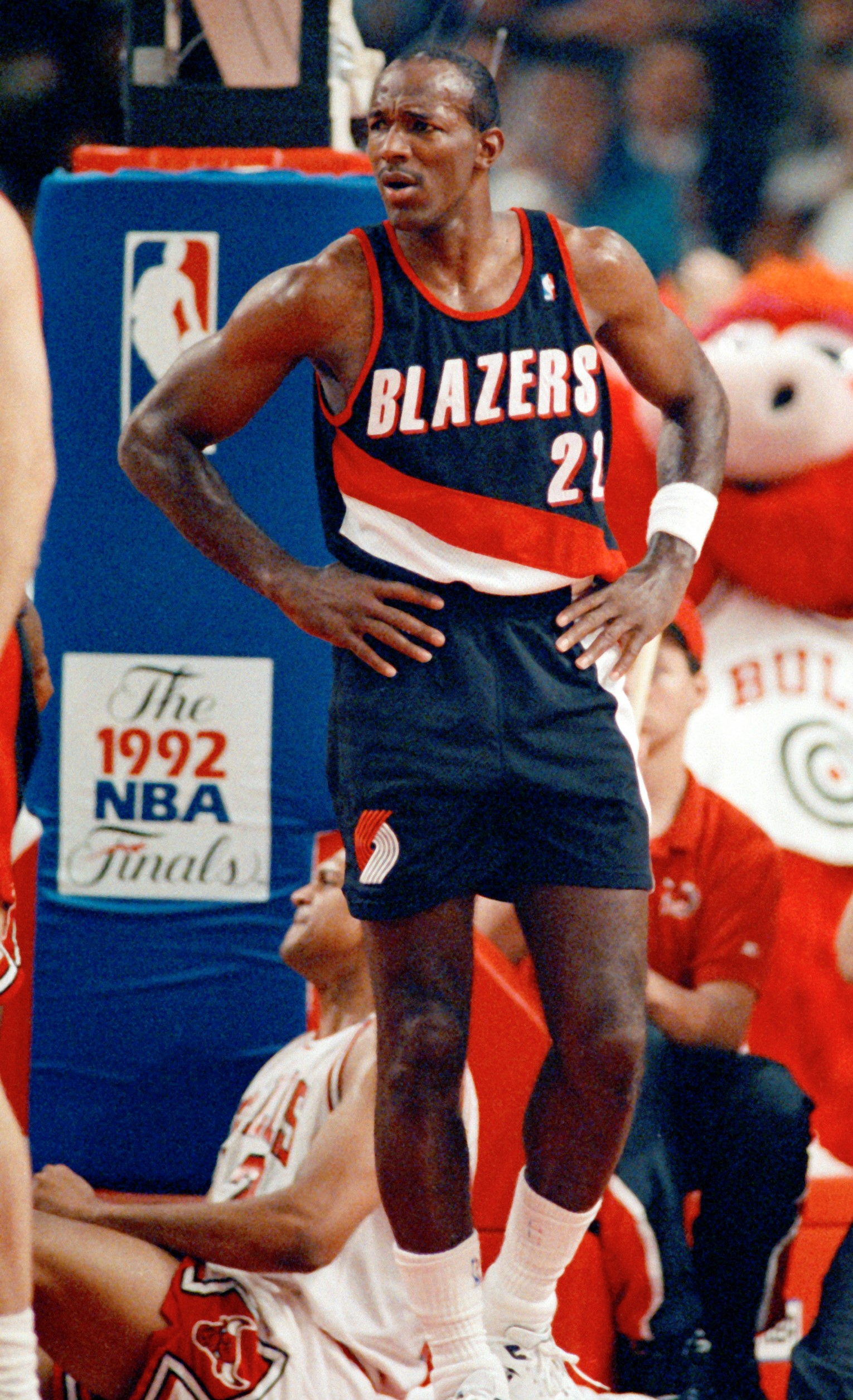 Clyde Drexler, #22 of the Portland Trail Blazers, in Game 1 of the NBA Finals against the Chicago Bulls at the United Center, June 3, 1992.

He and the Bulls were about to be challenged by Clyde Drexler and Portland Trail Blazers.

If there were no Jordan, Drexler would have been known as "Air Drexler" instead of "Clyde the Glide." He did not share Jordan's all-round skills but he always made smart calls both in offense and defense. He had his playoff highlights in the series against the Los Angeles Lakers, the Phoenix Suns and the Utah Jazz. Moreover, Portland press called him a better 3-point shooter than Jordan before the Finals.

They should not have done that.

After the first half of Game 1, Jordan buried six shots from downtown and scored 35 points – both new records in the Finals history. After he made the sixth 3-pointer, he did the famous shrug as if he were saying: "What can I say? I just drained those shots." 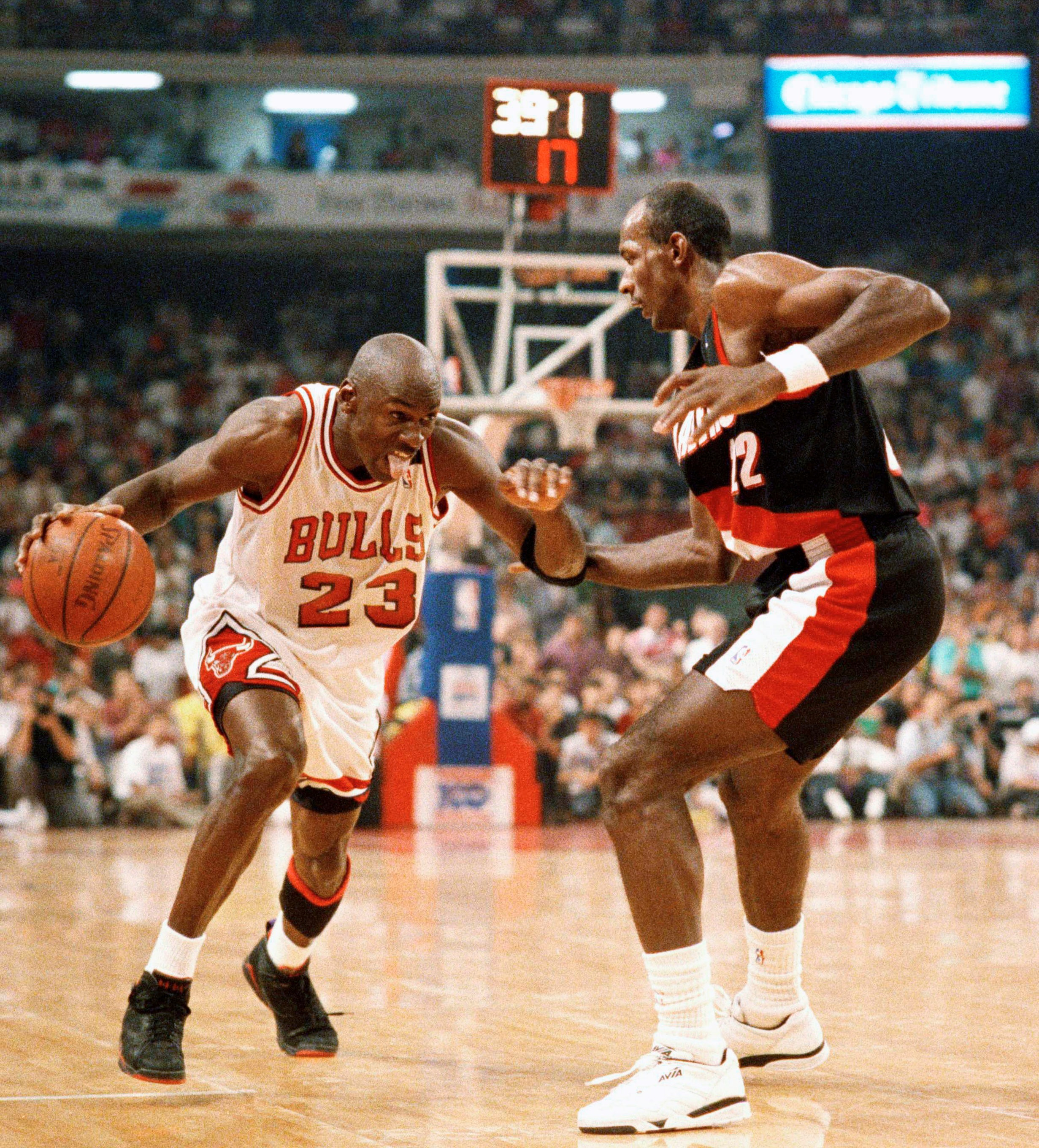 Michael Jordan, #23 of the Chicago Bulls, tries to break through the defense of Clyde Drexler of the Portland Trail Blazers in Game 6 of the NBA Finals at the United Center, June 14, 1992.

122-89, the Trail Blazers were slaughtered at the United Center. Compared with Jordan's 39 points and 11 assists, Drexler only got 16 points, five rebounds and seven assists.

Drexler continued to lose to Jordan in Game 2 in individual performance but Portland's wolfpack worked: six of their players reached double-digits in scoring, including Danny Ainge who got nine in overtime. 115-104, Portland claimed a win before going back home.

Game 3 and Game 4 were finished in similar scenarios: When the Bulls made threatening gestures defensively, the Trail Blazers would be intimidated and suffer a loss. However, Rip City always knew how to learn from failure and came back with team efforts. Both sides pocketed one win to make the series 2-2. 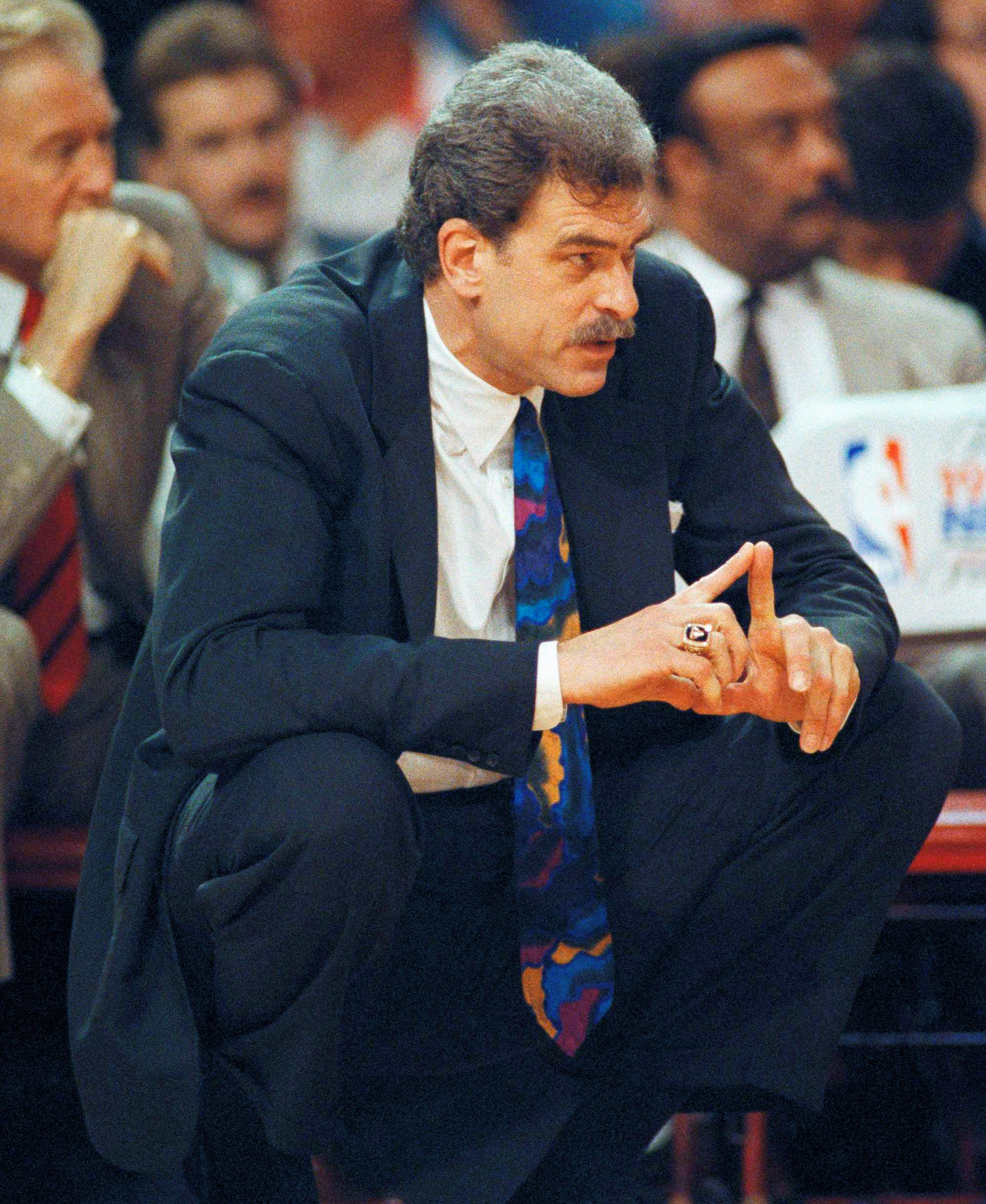 Phil Jackson, head coach of the Chicago Bulls, pays attention to what happens on the court in Game 6 of the NBA Finals against the Portland Trail Blazers at the United Center, June 14, 1992.

In three of the four games, Drexler lost to Jordan in stats and he refused to even challenge the guy who also defeated him in the regular season MVP contest. Portland might be okay with Drexler being a nice teammate, but other media outlets would not like it – this is the NBA Finals, people needed argument and gunpowder.

Then there was Buck Williams, Portland's muscular blue-collar power forward who said Game 5 would be the fourth World War. Local press loved what he said, but so did Jordan.

He began to aim for Drexler in every possession in Game 5. The physical contest sent Drexler to the free throw line 14 times (12 were made) but also hurt Drexler's touch as he was only 9-21. Having dropped 30 points and 10 rebounds, he was fouled out. By contrast, Jordan though committed five fouls, he managed to stay in the court and put down 46 points, five rebounds and four assists. 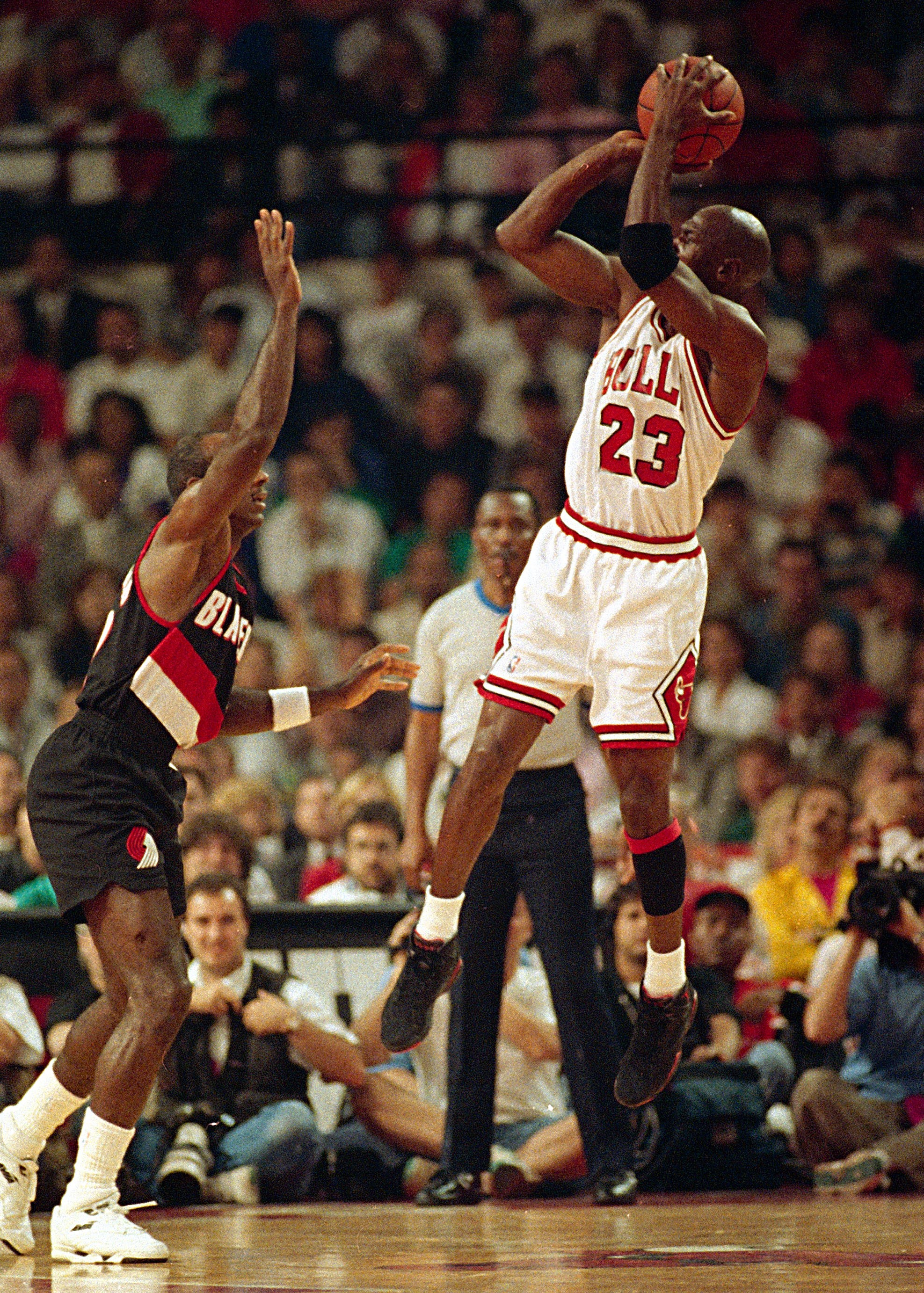 Michael Jordan, #23 of the Chicago Bulls, shoots the ball in Game 1 of the NBA Finals against the Portland Trail Blazers at the United Center, June 3, 1992.

Then Phil Jackson, head coach of the Bulls, pulled a crazy trick from his sleeves: he left Pippen and four bench players - Scott Williams, Stacey King, Bob Hansen and B.J. Armstrong Jr. on the court.

This confused both the Trail Blazers and their head coach Rick Adelman. Were the Bulls giving up? The Trail Blazers' players turned to their coach for answers and instructions, but Adelman did not have them. He could give his team enough freedom to play top offense, but he was unable to rise to the occasion when the opponents did not play by the book.

While their opponents remained lost on the court, the Bulls started to tighten the leash in defense. They only trailed 81-78 when Jordan returned and took over. The No. 23 shot above Drexler's head, stole the ball from Buck Williams, broke in along the baseline to make a layup, drew and made free throws. The Bulls came back from a 15-point trail in Q4 to win Game 6.

Michael Jordan won his second ring and second NBA Finals MVP in 1992. He was about to attend the Summer Olympics in Barcelona that summer and chase the third title in a row five months later.