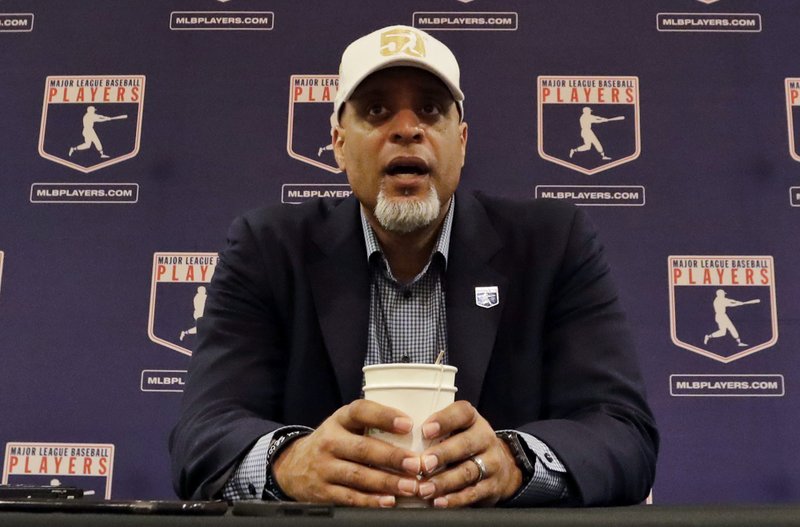 FIEL - In this Feb. 19, 2017, file photo, Tony Clark, executive director of the Major League Players Association, answers questions at a news conference in Phoenix. Major League Baseball rejected the players' offer for a 114-game regular season in the pandemic-delayed season with no additional salary cuts and told the union it did not plan to make a counterproposal, a person familiar with the negotiations told The Associated Press. The person spoke on condition of anonymity Wednesday, June 3, 2020, because no statements were authorized. (Photo: AP File)

Baseball players reaffirmed their stance for full prorated pay, leaving a huge gap with teams that could scuttle plans to start the coronavirus-delayed season around the Fourth of July and may leave owners focusing on a schedule as short as 50 games.

“Earlier this week, Major League Baseball communicated its intention to schedule a dramatically shortened 2020 season unless players negotiate salary concessions,” union head Tony Clark said in a statement. “The concessions being sought are in addition to billions in player salary reductions that have already been agreed upon. This threat came in response to an association proposal aimed at charting a path forward.”

“Rather than engage, the league replied it will shorten the season unless players agree to further salary reductions,” Clark added.

Players originally were set to earn about $4 billion in 2020 salaries, exclusive of guaranteed money such as signing bonuses, termination pay and option buyouts. The union’s plan would cut that to around $2.8 billion and management to approximately $1.2 billion plus a $200 million bonus pool if the postseason is completed.

MLB last week proposed an 82-game season with an additional sliding scale of pay cuts that would leave a player at the $563,500 minimum with 47% of his original salary and top stars Mike Trout and Gerrit Cole at less than 22% of the $36 million they had been set to earn.

Players countered Sunday with a plan for a 114-game regular season with no pay cuts beyond the prorated salaries they agreed to on March 26. That would leave each player with about 70% of his original pay.

MLB rejected that Wednesday, when Deputy Commissioner Dan Halem wrote in a letter to union chief negotiator Bruce Meyer informing him “we do not have any reason to believe that a negotiated solution for an 82-game season is possible.”

“Nonetheless, the commissioner is committed to playing baseball in 2020,” Halem said in the letter, which was obtained by The Associated Press. “He has started discussions with ownership about staging a shorter season without fans.”

Management officials have said they are considering a slate of perhaps 50 games or fewer. There has not been a schedule averaging fewer than 82 games per team since 1879.

“The overwhelming consensus of the board is that players are ready to report, ready to get back on the field, and they are willing to do so under unprecedented conditions that could affect the health and safety of not just themselves, but their families as well,” Clark said in a statement. “The league’s demand for additional concessions was resoundingly rejected.”

Baseball’s March 26 deal allows games if there are no government restrictions on playing in front of fans and no relevant travel limitations. The sides agreed to “discuss in good faith” the economic feasibility of playing in empty ballparks, which appears to be the likely option.

MLB says that without fans it would average a loss of $640,000 for each additional game played. The union disputes the teams’ financial figures.

Teams also worry about a second wave of the new coronavirus this fall and don’t want to play past October, fearing $787 million in broadcast revenue for the postseason could be lost. MLB proposed expanding the playoffs from 10 teams to 14, which would generate additional broadcast rights to sell, and players have offered to guarantee the larger playoffs for both 2020 and 2021.

While baseball has reverted to the economic bickering that led to eight work stoppages from 1972-95, the NBA announced plans Thursday to resume its regular season with 22 teams on July 31, the NHL is moving ahead with plans for an expanded Stanley Cup playoffs this summer and MLS is planning to have teams return with a tournament in July.

“In this time of unprecedented suffering at home and abroad, players want nothing more than to get back to work,” Clark said. “But we cannot do this alone.”