DOHA, Dec. 12 (Xinhua) -- Morocco are the revelation of the Qatar World Cup, becoming the first African side ever to reach the semifinals of the World Cup thanks to performances brimming with passion and defensive intensity.

Moroccan fans have given life and color to the stands in a tournament that has at times lacked a true football atmosphere. 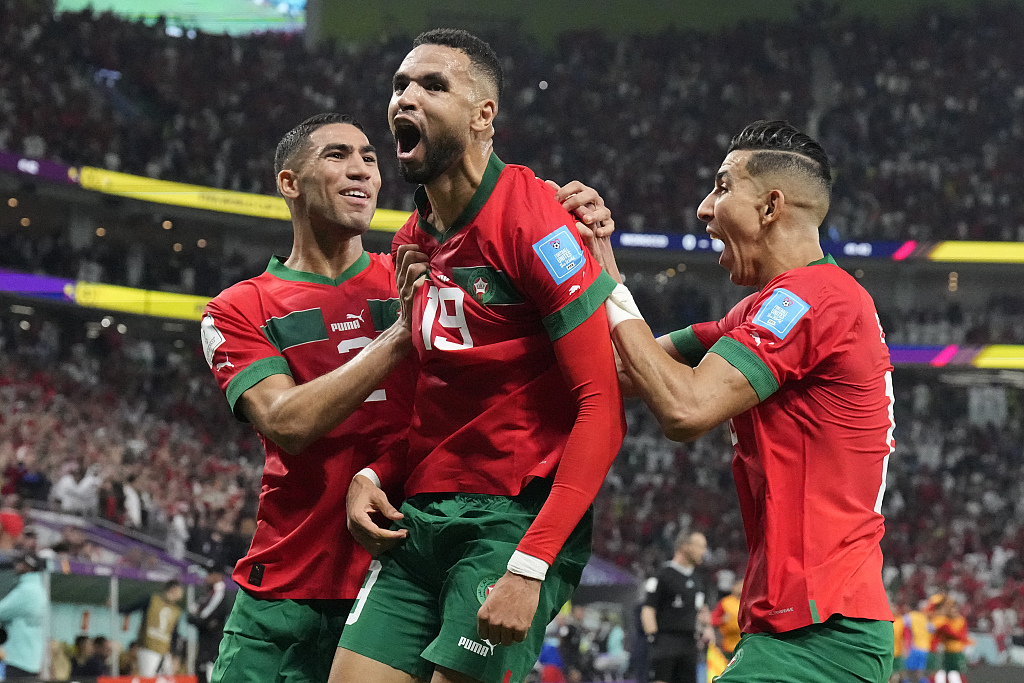 The stadium announcers have tended to make the biggest noise in most of the World Cup Stadiums, but that's not the case when Morocco play, with the wave of red shirts and flags turning the last two ties into virtual 'home' games for Morocco.

Morocco's progress is maybe not as big a surprise as many are making out, given that nearly all of their team plays at the highest level of European football, but there is no doubting that coach, Walid Regragui has drilled them into a formidable defensive unit.

Morocco have conceded just one goal so far in the World Cup and that was an own goal that came in their 2-1 win over Canada in the last group game.

Prior to that, the Moroccan defense shut out Croatia in a 0-0 draw and then beat Belgium 2-0.

In the last-16, they had just 23 percent of the ball against Spain, but succeeded, not just, in shutting out the Spanish for 120 minutes, but stopping them getting a single shot on target from open play in that time. Spain's only two efforts on goal in that game came after set pieces.

And of course, in the quarter-finals, Morocco held on against Portugal, with Youssef En-Neysri's early goal enough to see them make history.

No side has reached the semi-finals of a World Cup with defensive numbers like that since Italy in 2006, and that Italy has a defensive line-up of Gianluigi Buffon in goal alongside Fabio Cannavaro, Marco Materazzi and Gianluca Zambrotta, with Gennaro Gattuso and Mauro Camoranesi snapping away in midfield.

Regragui said after the win over Portugal that Morocco were like "Rocky" the underdog, who still knows how to slug it out against the best and who may spend time on the ropes, but never on the canvas.

"This is a World Cup and we are a family and a united team and they put in everything," he insisted after beating Spain four days earlier.

What makes the unity in the Morocco side so impressive, is that just 12 of the 26-man squad were actually born in the country, with the other 14 born in places such as France, Spain, Belgium, Italy, the Netherlands and Canada, but choosing to play for their parents' homeland.

"I am very happy with that," said Regragui.

"Before the World Cup, some people questioned players born in Europe or born in Morocco. Today they showed that every Moroccan, if they have a passport, is Moroccan- I am born in France, but nobody can doubt my love for my country," said the coach.

And nobody watching how his players defend should doubt their commitment.