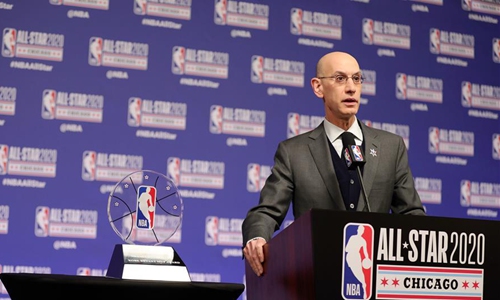 The National Basketball Association (NBA) has appointed a Chinese national as its China branch boss, but prominent commentators and fans noted if it wants to win its way back to the Chinese mainland market, it should properly handle Houston Rockets general manager Daryl Morey — who tweeted in support of Hong Kong rioters last year, leading to significant disappointment and a boycott by the Chinese public, including major broadcasting partners.

NBA officials are anticipating potential losses "in the hundreds of millions of dollars across the sport" due to the COVID-19 pandemic, according to The Guardian on Tuesday, citing an ESPN report. This is another blow for a league still reeling from the economic damage arising from its frayed relationship with China, which is estimated to be a billion-dollar business, and even more if taking advertisement and patronage into consideration.

Suffering enormous losses, the league is eager to pick up its performance in China, which has successfully reined in the COVID-19 pandemic, with a friendly gesture, observers noted.

The association of professional teams in the US announced on Tuesday its appointment of Michael Ma Xiaofei as the new CEO for the NBA's China branch, effective in June. Ma would be the first mainland native boss for the NBA's Beijing office since it was established in 2008.

The new executive is the son of Ma Guoli, one of the founding figures of China Central Television's (CCTV) sports channel, who helped break the ice and introduce NBA live games to CCTV in the 1990s.

The new appointment no doubt reflects NBA's belief that Ma can get the league out of the situation, given his background, Su Qun, one of the best-known basketball commentators in China and editor-in-chief of the Basketball Pioneer newspaper, told the Global Times.

The NBA after the Morey incident has found itself stuck in the public opinion battlefield between China and the US, as bilateral ties remain tense amid the COVID-19 pandemic, Su said, noting that Ma needs to confront the deadlock brought about by the incident.

It waits to be seen to what extent Ma is empowered to handle the issue, Su commented, but he is confident that since Ma chose to take the job, he will have greater sway with NBA's headquarters, otherwise, it will be next to impossible to break the ice.

If the Morey incident is properly handled, the NBA, in the long run, could demonstrate that China welcomes foreign businesses to invest and make money in the country, as long as they respect the country's sovereignty and territorial integrity, Su said.

The appointment came a day after CCTV issued a solemn statement on China's Twitter-like Sina Weibo, denying any plan to resume airing NBA games. CCTV has not broadcast any NBA games since October 2019.

Chinese netizens commented on the NBA official reshuffle, and many said they could not care less about the US league, unless Morey is punished for his misbehavior.

"The season is suspended due to the COVID-19 anyway, and I'm OK to continue living without the NBA," wrote a fan on Hupu.com, a major sports website in China.

"We did not and will not forget what he has done. When the NBA and Morey own their mistakes, I will consider welcoming the league back," wrote another.

Most of North America's major leagues have been shuttered during the COVID-19 outbreak, reports said.