SPORTS NASCAR picks up at tricky Darlington after 10-week hiatus

NASCAR picks up at tricky Darlington after 10-week hiatus 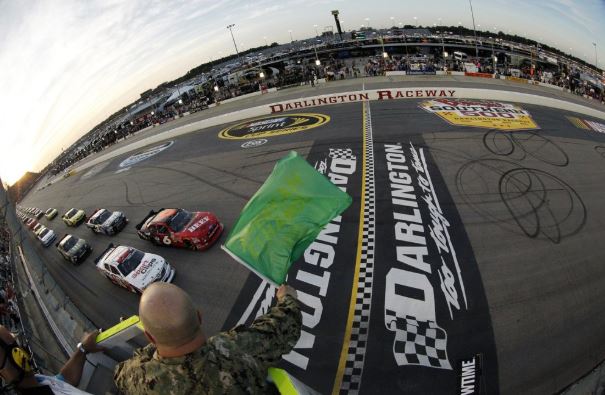 Drivers take the green flag for the start of the NASCAR Nationwide Series auto race at Darlington Raceway in Darlington, SC in May 2012. (File photo: AP)

NASCAR will not be as you remember it when racing returns at old egg-shaped Darlington Raceway.

There will be no elaborate infield tailgates, inflatable pools or hundreds of American flags that fly above the campers. The grandstands will be empty gray rows, no spectators allowed.

Darius Rucker will perform a virtual version of the national anthem, Fox Sports will call the race remotely from a studio in Charlotte, North Carolina, and the victory lane celebration will be a muted affair void of high-fives and hugs. Drivers don’t have to shuttle between hospitality events to schmooze with sponsors, and their car owners aren’t even expected to be at Sunday’s race. Most are over 65 and considered at risk for the coronavirus and not essential to conduct a race.

It will be weird and look nothing like it did 10 weeks ago when NASCAR last raced before its season was suspended by the coronavirus pandemic. But as sports fans across the country have clamored for live action, it will be a rare opportunity for NASCAR to be alone in the spotlight and showcase its product — perhaps even to viewers who have long expressed zero interest in stock car racing.

There is no practice or qualifying, and Brad Keselowski will lead the field to green at 3:30 p.m. EDT; the lineup was set in a televised random draw. Most of the drivers last raced March 8 and will take the green flag with no warm-up and no idea if their car is properly prepared to tackle NASCAR’s oldest superspeedway.

Darlington is considered one of the most technical tracks on the circuit.

“I envision people are going to be pretty timid, at least for the first few laps,” said Denny Hamlin, who won the Daytona 500 on Feb. 17, the first of only four completed races this season.

Hamlin anticipated conservative setups based partly on data from the Southern 500 last September, NASCAR’s last visit to “The Track Too Tough To Tame.” Once the drivers have settled in, Hamlin believes “it’s going to be like an old shoe. I don’t think from a TV perspective fans will see anything different than just a normal race that they would normally see at Darlington.”