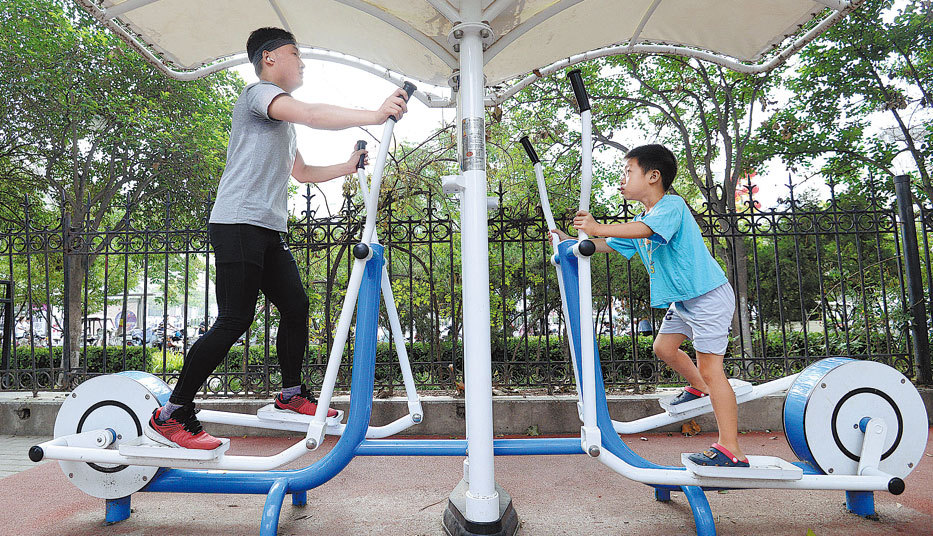 Inspired by a new State guideline, China's sports and urban development authorities have teamed up to improve the quality of the nation's public fitness facilities.

Long established as an Olympic superpower, China is shifting its sporting focus from elite to grassroots level after the improvement of the nation's overall fitness through 2025 was highlighted as a key goal in a document issued last week by the State Council, or China's cabinet.

At the core of the guideline, the central government calls for a collective effort from the General Administration of Sport of China, the Ministry of Housing and Urban-Rural Development and the Ministry of Natural Resources to better construct, renovate and operate public sports venues and facilities through the 14th Five-Year Plan (2021-25) period to contribute to the Healthy China 2030 initiative.

The document, outlining 11 measures, urges relevant departments to tackle existing challenges, such as the lack of open sites in urban regions for sports venues, insufficient government funding to upgrade community facilities and shortcomings in operational know-how.

"For a lot of people living in urban areas, where to go if they want to exercise remains a headache, as well as how far and how expensive those venues are," Li Jianming, a vice-minister of the GASC, said during a media briefing on Saturday.

"This guideline intends to work out some solutions through flexible planning across departments and additional financial support."

Regional sports and urban development authorities are required to conduct a survey within the next year on conditions of existing facilities to identify shortcomings and to compile a catalogue of sites in cities and rural areas that are currently available for constructing exercise facilities.

Building, refurbishing and expanding approximately 1,000 sports parks to a level capable of hosting amateur competitions and mass fitness activities is also a target through 2025, while diversifying functions of major sports venues for purposes such as epidemic containment and disaster alleviation is specified in the document, too.

"Making room in densely populated urban regions for sports grounds is a real challenge," said Wang Ke, an official from the Ministry of Housing and Urban-Rural Development.

"Constructing small-scale and accessible sports facilities wherever possible in cities during the process of redesigning and upgrading old communities is our next major task."

Meanwhile, the central government will continue to invest in major sports venues－large-scale multipurpose centers, Olympic stadiums and State-owned training bases－that will be free to the public or offer low-cost entry fees for certain periods.

Since 2014, the Ministry of Finance has provided subsidies totaling 6 billion yuan ($893 million) in government funds to support over 1,000 such venues. However, the funding should be allocated more precisely and prudently, according to experts.

"The allocation of the subsidies shouldn't just take the size of the venues into consideration. It should favor those which are open more often to the public and host more mass fitness events," said Zheng Jiakun, a professor with Shanghai University of Sport.

Citing an earlier study on the development of mass fitness by the university, Zheng stressed that the current distribution of government funding should be reevaluated and optimized to better target venues regularly used by the public.

To improve the efficiency of venue operation, the GASC will also work with property owners and IT experts to provide services such as online venue booking, remote workout instruction and traffic monitoring.

"Our goal is to significantly improve the accessibility, quality and service of such facilities for the public to be able to exercise and enjoy sports at venues within walking distance of less than 15 minutes of their homes," said the GASC's Li.