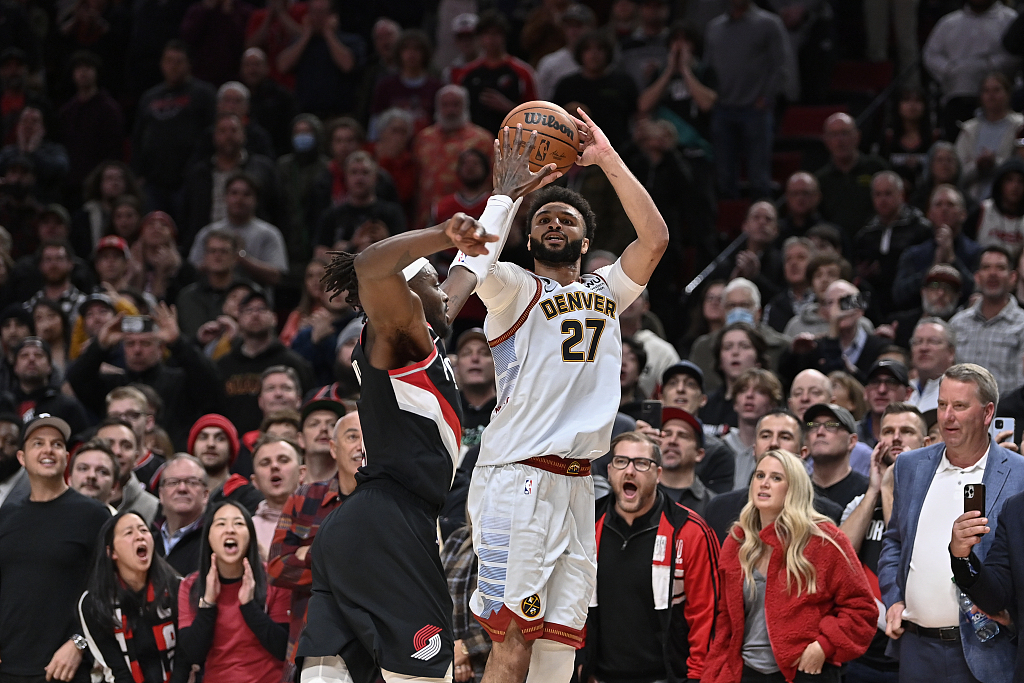 Jamal Murray (#27) of the Denver Nuggets shoots in the game against the Portland Trail Blazers at Moda Center in Portland, Oregon, December 8, 2022. (Photo: CFP)

The Denver Nuggets edged the Portland Trail Blazers 121-120 at Moda Center in Portland, Oregon on Thursday, after Jamal Murray ended the crazy night of Damian Lillard with a triple from left corner.

The Nuggets came to Portland with three straight losses and Murray had averaged only 17.6 points and five assists. He returned this season from a torn anterior cruciate ligament (ACL) on his left knee, but left much his explosive scoring ability elsewhere. That was not good news for the Nuggets, which couldn't afford to overload Nikola Jokic offensively anymore.

Murray continued to underperform in the first three quarters, during which he shot 3-for-10 from the field to get only seven points. It's good that he delivered six assists, but the Nuggets needed him to match Lillard in scoring production, especially when Lillard already drained 18 points in the third quarter alone. 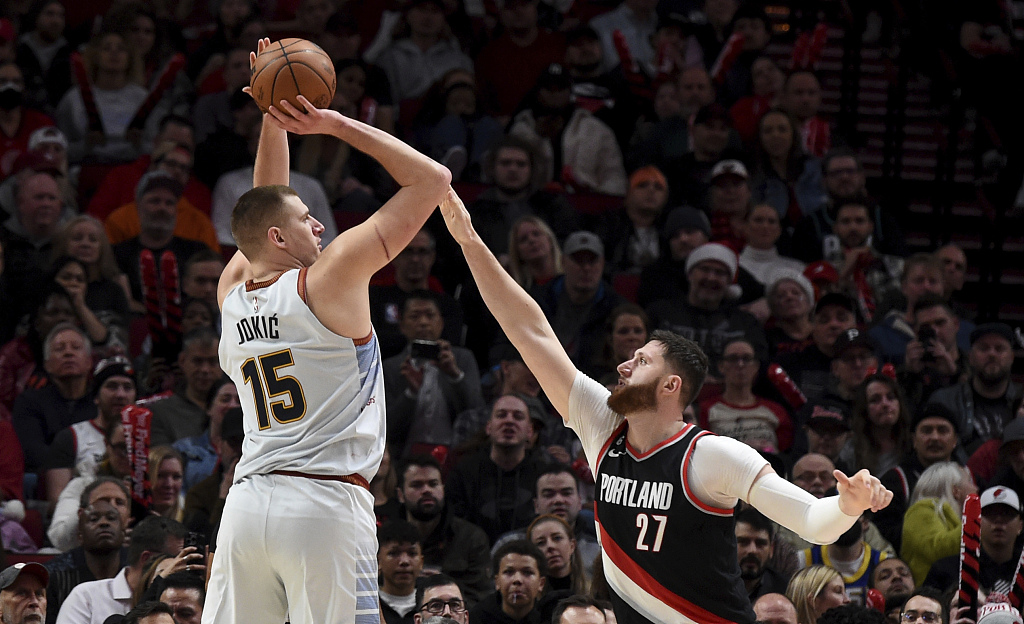 Nikola Jokic (#15) of the Denver Nuggets shoots in the game against the Portland Trail Blazers at Moda Center in Portland, Oregon, December 8, 2022. (Photo: CFP)

It's no secret that Lillard, who shoots off the dribble to kill at the 3-point line by exploiting teammate's screen, is the last type of player Jokic wants to guard. However, Lillard managed to lift his game to a even higher level on Thursday night. Having spent the first half focusing on orchestrating and delivering nine assists, Lillard turned on his scoring switch from the third quarter. The scariest part of his performance was that he made triples next to different players.

Despite their bottom five defensive rating in the NBA, the Nuggets have several reliable defenders: Aaron Gordon, Bruce Brown and Kentavious Caldwell-Pope. However, if none of them could even slow Lillard down, the Nuggets would be look at an unavoidable fourth loss in a row. 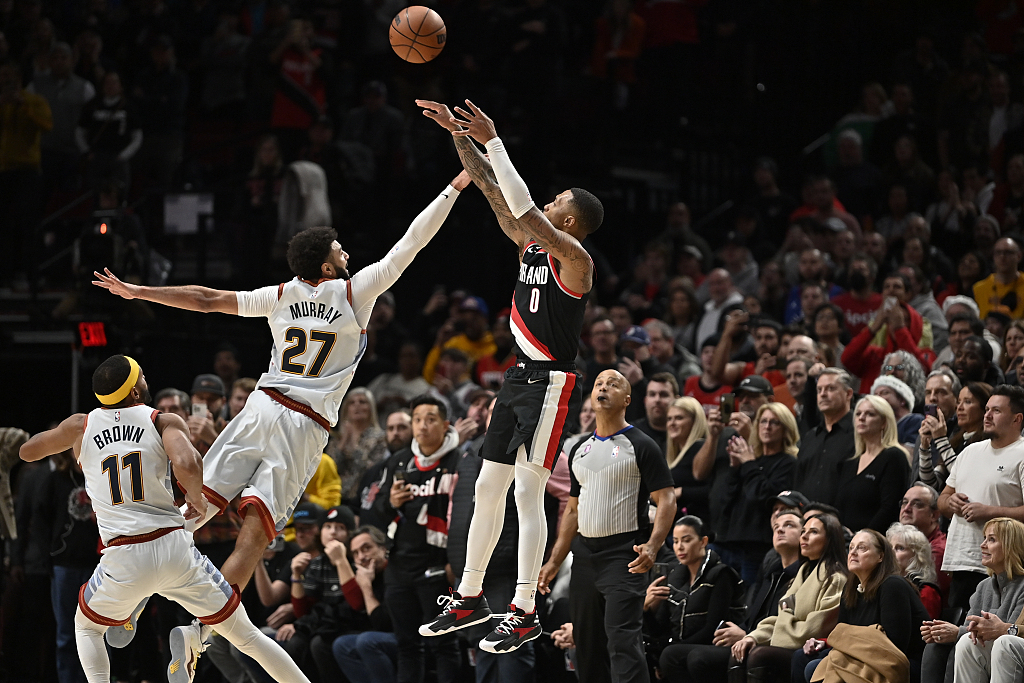 Damian Lillard (#0) of the Portland Trail Blazers shoots in the game against the Denver Nuggets at Moda Center in Portland, Oregon, December 8, 2022. (Photo: CFP)

It's unfair to blame Jokic for the team's recent poor performance because he was the reason the team managed to stay above .500 of win percentage and maintain a top five offensive rating. When Jusuf Nurkic was on the court, it was difficult even for Jokic to power his way into the paint. As a result, he had to orchestrate more in the high post. Such predictable game made it easier for defenders to do their job and explained the five turnovers Jokic committed in the first quarter.

Despite all the difficulties he faced, Jokic didn't let any chance go when Nurkic was resting on the bench. The two-time NBA Most Valuable Player destroyed Drew Eubanks and Justise Winslow to drop 30 points, 10 rebounds and nine assists.

The turning point of Thursday's game came in the fourth quarter when Murray began to attack in a more determined way and heated up with his touch. The more points he scored, the more offensive tricks he and Jokic conjured as a pair. The Nuggets led 118-117 when there were 17 seconds left. Both Murray and Lillard contributed 11 points in this quarter. 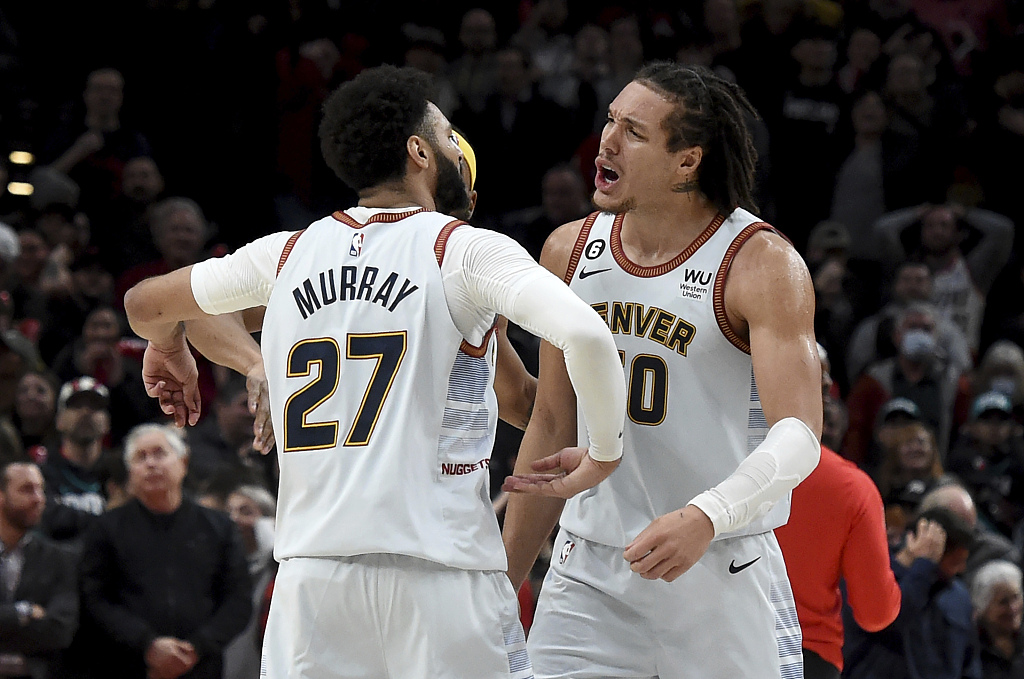 Jamal Murray (#27) and Aaron Gordon of the Denver Nuggets celebrate after Murray makes the game-winning shot against the Portland Trail Blazers at Moda Center in Portland, Oregon, December 8, 2022. (Photo: CFP)

Lillard dribbled to the front court, faced Murray one on one. Before Brown joined Murray to double-team him, Lillard took a step to the right, pulled up to shoot and made a 3-pointer to help Rip City lead again 120-118. The whole Moda Center was yelling on fire when Lillard again did his signature move of tapping on the wrist to celebrate.

There were 8.8 seconds left for the Nuggets, which called a timeout. Jokic received the ball in the left wing when Nurkic stood right behind him. Jokic passed it to Murray, who drove left to dodge Jerami Grant. With about one step of space between him and Grant, Murray pulled up and drained a triple as well for the Nuggets to take back the lead 121-120 with 0.8 seconds left.

The Trail Blazers' final attempt to pass to Nurkic was blocked by Caldwell-Pope. The team failed to get their third win in a row.

Other games on Thursday (away teams come first): 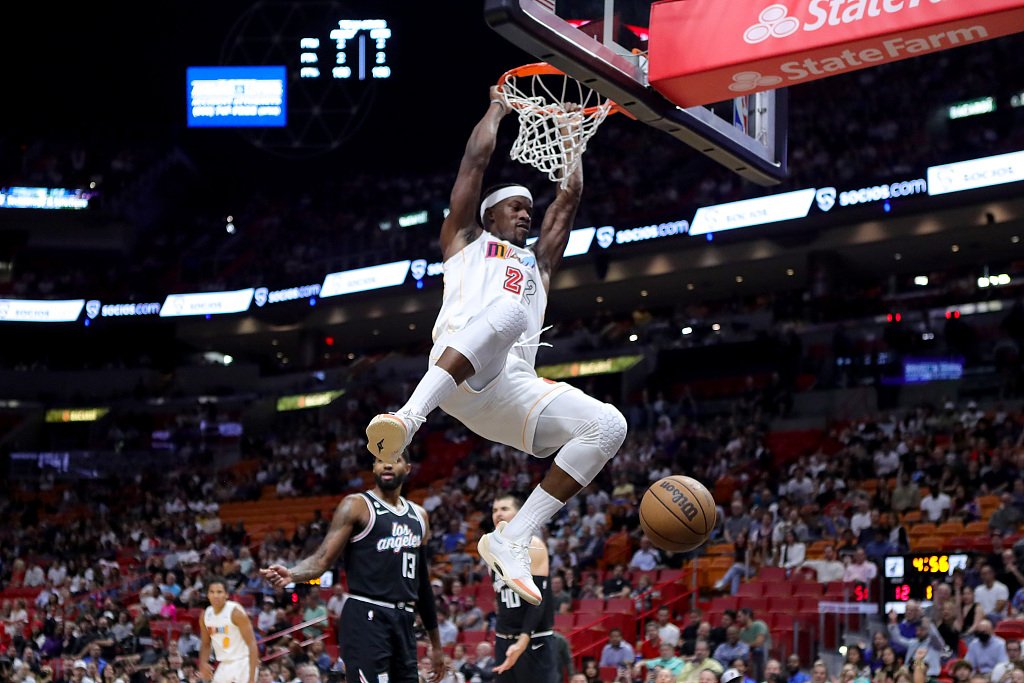 Jimmy Butler (#22) of the Miami Heat dunks in the game against the Los Angeles Clippers at FTX Arena in Miami, Florida, December 8, 2022. (Photo: CFP)

The Clippers missed Kawhi Leonard in the game at FTX Arena in Miami, Florida. They failed to stop Bam Adebayo from dominating the paint with 31 points and 10 rebounds, but gave the Heat's perimeter defense a hard time by going 17-for-36 from deep. Paul George and Reggie Jackson both had boiling touch from outside, combining to make nine triples for the Clippers.

The Clippers cut their deficit to four points (107-103) after Jackson made a 3-pointer at 3:29 in the final quarter. Then came the solo time of Jimmy Butler, who made three fadeaway jumpers in front of Jackson and Luke Kennard. Butler already delivered eight assists so the Clippers couldn't afford to trap him too hard. He was smart and skillful enough to fire in the middle range, which was out of the defensive coverage of Ivica Zubac.

The victory on Thursday ended the Heat's two-game losing streak. 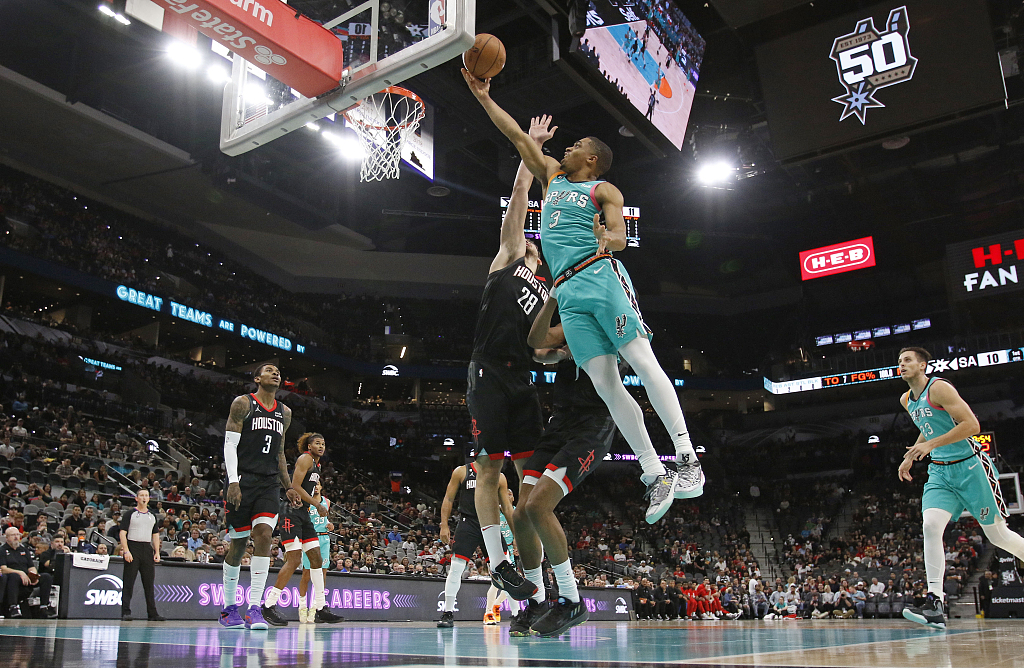 Keldon Johnson (#3 in blue) drives toward the rim in the game against the Houston Rockets at AT&T Center in San Antonio, Texas, December 8, 2022. (Photo: CFP)

The contest between the bottom two teams in the Western Conference at AT&T Center in San Antonio, Texas, was more intense than expected. The Rockets, with better athleticism, forced 16 turnovers out of the Spurs and led in offensive rebounds 16-7. However, their poor touch and unwise shooting choices cost them the chance to secure the second consecutive win.

As for the Spurs, they ended their 11-game losing steak at home. Nonetheless, judging by the "Wembanyama" printed on some of the fans' shirts, it's hard to say how happy the team was with this result.