Nikola Jokic #15 of the Denver Nuggets tries to break the defense of Domantas Sabonis of the Indiana Pacers during their NBA game at the Pepsi Center in Denver, Colorado, January 19, 2020. (Photos: CGTN)

The Pacers left the Pepsi Center having extended their winning streak to five and put an end to the Nuggets' run of three straight wins on Sunday.

Domantas Sabonis dropped his first triple-double (22 points, 15 rebounds, 10 assists) for the Pacers. He's also the first player in the team's history to have a 20+15+10 game.

"You just play the game. If teams collapse on me I try to kick it out," Sabonis said after the game. 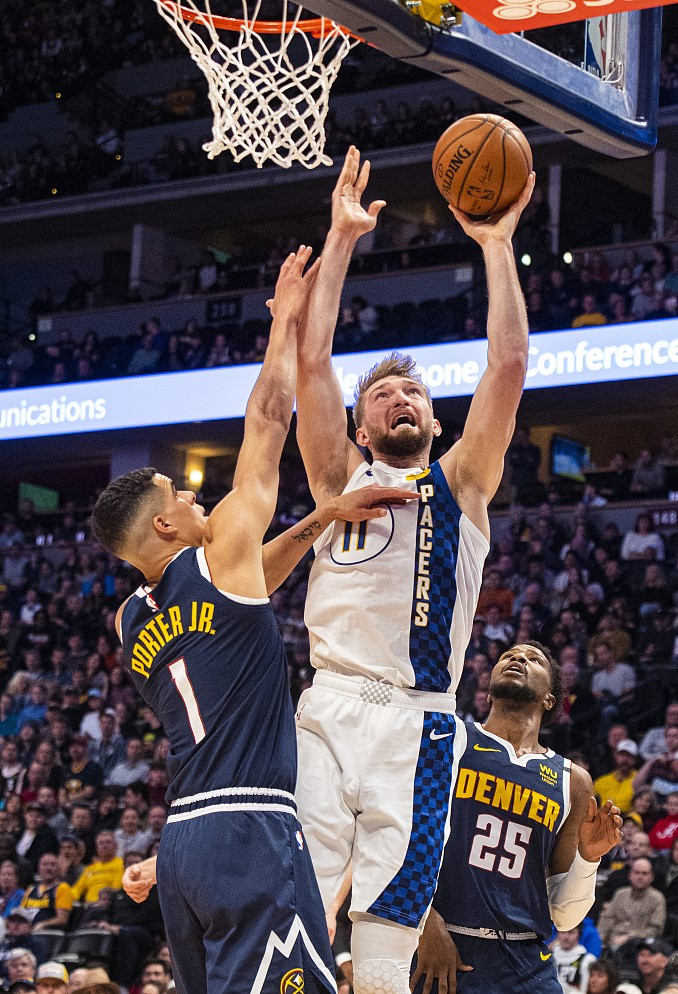 Domantas Sabonis #11 of the Indiana Pacers shoots against the Denver Nuggets at the Pepsi Center in Denver, Colorado, January 19, 2020.

However, the 23-year-old Lithuanian big man is not the only hero behind the team's victory. His teammate Doug McDermott was the one who led the Pacers to overcome a three-quarter-long trail before winning.

Denver, under the orchestration of Nikola Jokic, were in steady control in the first three quarters of the game. Though Indiana have the league's block leader Myles Turner, they had no idea how to keep Jokic from having his own way in offense. The 2019 first-team center put down 30 points, 10 rebounds and four assists at a field goal rate of 62.5 percent. He also buried two 3-pointers and eight free throws.

By the way, Turner got only three points, two rebounds and one assist in 19 minutes before he was fouled out. 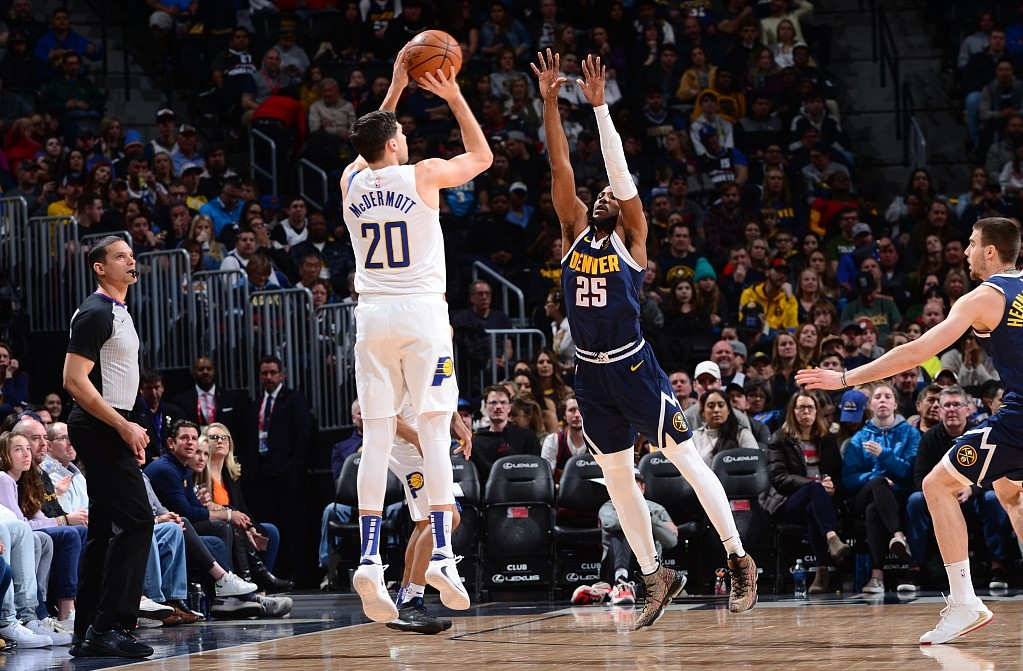 Doug McDermott #20 of the Indiana Pacers jumps high against the Denver Nuggets at the Pepsi Center in Denver, Colorado, January 19, 2020.

Fortunately for the Pacers, McDermott stood out for his team by making seven of eight shots, including four triples to score 18 points. His firepower helped the Pacers launch a 41-26 run in the last quarter, pocketing the final win of the game.

"People don't give us a lot of respect, and we like that. It's just motivation for us. We feel like we're one of the better teams in the East and we can play anyone, so were going to continue to play hard," McDermott 'said. 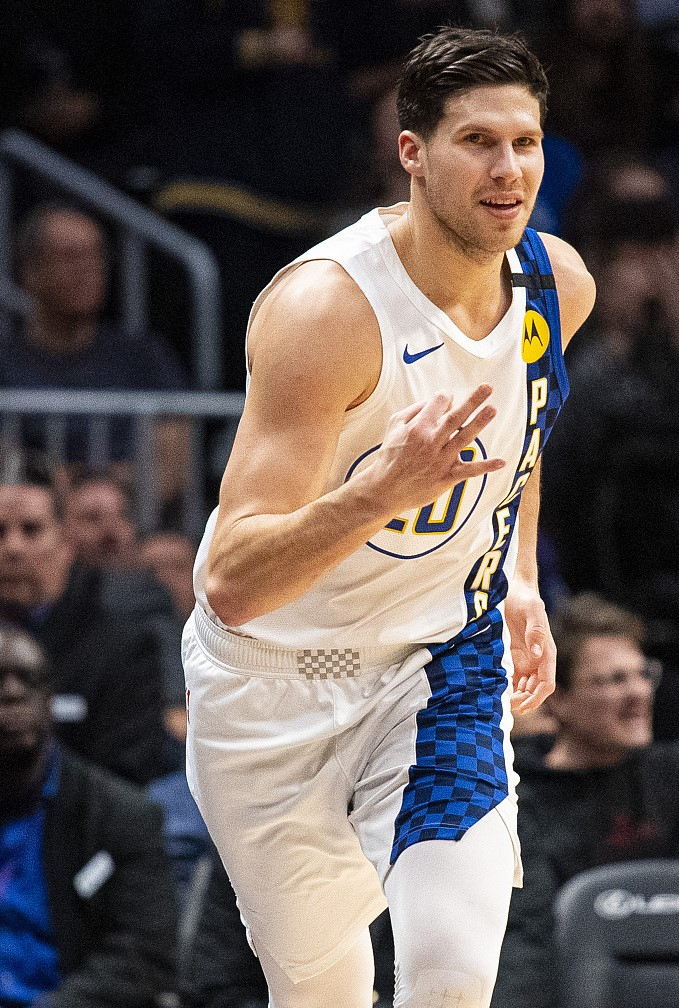 Doug McDermott of the Indiana Pacers reacts in the game against the Denver Nuggets at the Pepsi Center in Denver, Colorado, January 19, 2020.

The sharp shooter last week mentioned that he wants to attend the All-Star Three-Point Contest in mid-February. "I haven't been asked," he said. "I would do it. I feel like I've shot it pretty well in this league, so it'd be fun to do it someday. If it's not this year, it'd be kind of cool to do it here next year in Indy. Either/or is cool. If they reached out, I'd definitely do it, though."

This is a guy who could make 1.7 3-pointers at a rate of 42.9 percent per game; he deserves a chance in Chicago. 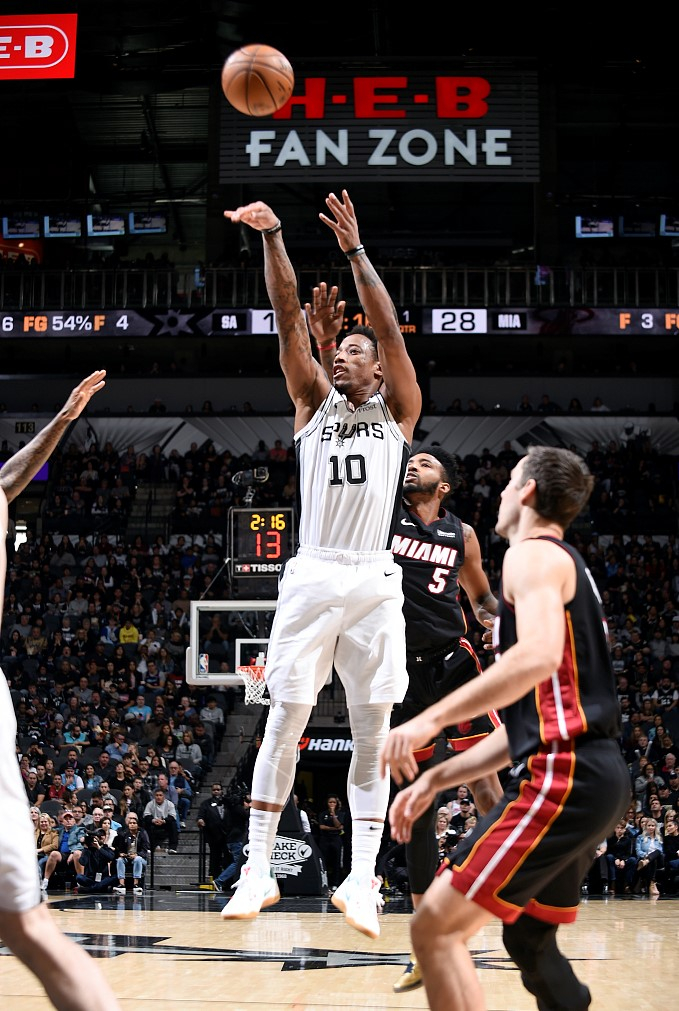 DeMar DeRozan #10 of the San Antonio Spurs shoots against the Miami Heat at the AT&T Center in San Antonio, Texas, January 19, 2020.

The Heat came to the AT&T Center to seek their third consecutive win but ran into tough resistance of the Spurs. Though Bam Adebayo dropped a big double-double of 21 points + 15 rebounds, DeMar DeRozan and LaMarcus Aldridge beat his efforts with 41 points together, helping the Spurs avoid being swept by the Heat.

DeRozan again scored 20 points, nine rebounds, nine assists and this is his 14th 20+point game in a row. His passing activated San Antonio's shooting squad on the bench – Patty Mills, Marco Belinelli and Derrick White together made seven shots from the 3-point line. Moreover, DeRozan's penetration in key moments was like a sharp dagger, cutting into Miami's defense where it hurt the most.

Though the Spurs were once trapped in slump in the first half of the season, things began to look good recent for the team as they claimed victories over three over the East's top 4 teams – 126-104 Milwaukee Bucks, 129-114 Boston Celtics and Sundy's win over the heat. The team are now No. 9 in the Western conference with a 18-23 record and trailing No. 8 Memphis Grizzlies by 1.5 games.