NBA highlights on Jan. 20: A painful MLK Day for Lakers at TD Garden 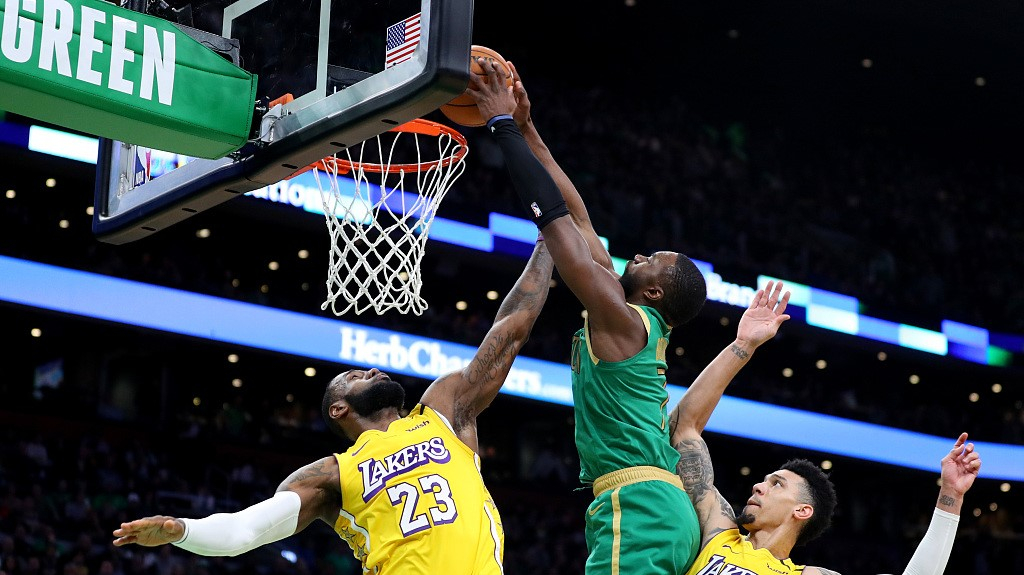 Jaylen Brown (C) of the Boston Celtics dunks over LeBron James of the Los Angeles Lakers in the game at the TD Garden in Boston, Massachusetts, January 20, 2020.

This home win could not be any better for the Celtics. They were the leading side in each of the four quarters; their least single-quarter score was 33 points; the team buried 13 3-pointers in the first three quarters at a rate of 52 percent; they led in fast-break points (25-11), points via turnovers (28-16), second-chance points (24-14) and even points in the paint (62-52).

The Celtics' most important signing for the season, Kemba Walker, has never a game against LeBron James – in all 24 regular season games, four playoff ones and even one All-Star game, Walker lost to James. Fortunately for him, this awkward record finally ceased to be true after Monday. 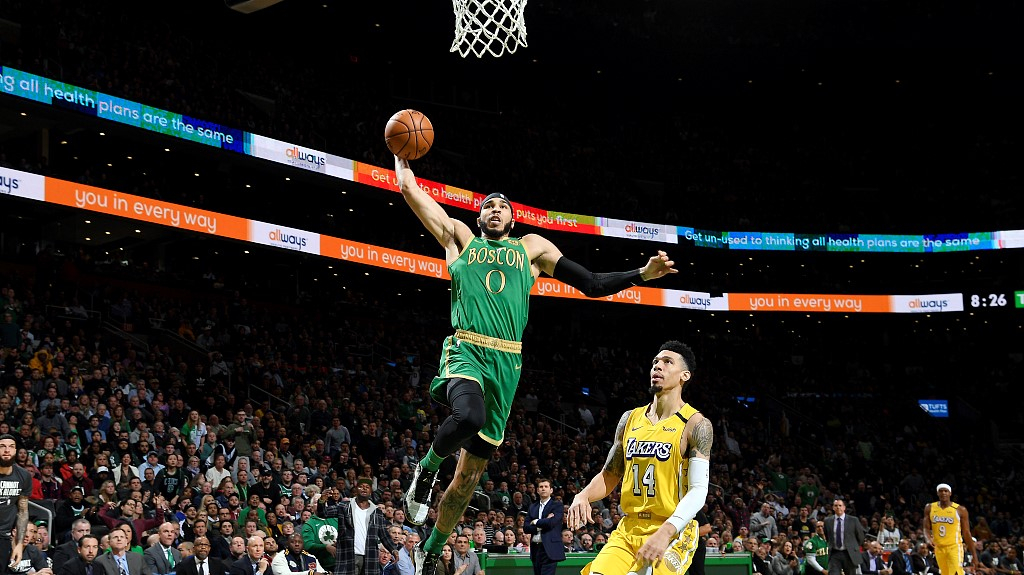 Jayson Tatum, #0 of the Boston Celtics, drives towards the rim in the game against the Los Angeles Lakers at the TD Garden in Boston, Massachusetts, January 20, 2020.

How did the Lakers lose? They allowed too many open triples; they watched the opponents reap offensive rebounds (14) and have their way in the paint; the whole team committed too many unnecessary turnovers (15).

Usually this was when LeBron James and Anthony Davis stood out to solve the problem. Nonetheless, that trick lost its mojo this time. Despite their size disadvantage, the Celtics have enough forwards – Gordon Hayward, Jaylen Brown, Jayson Tatum, Marcus Smart – who are strong and fast enough to slow James down without asking for help defense. 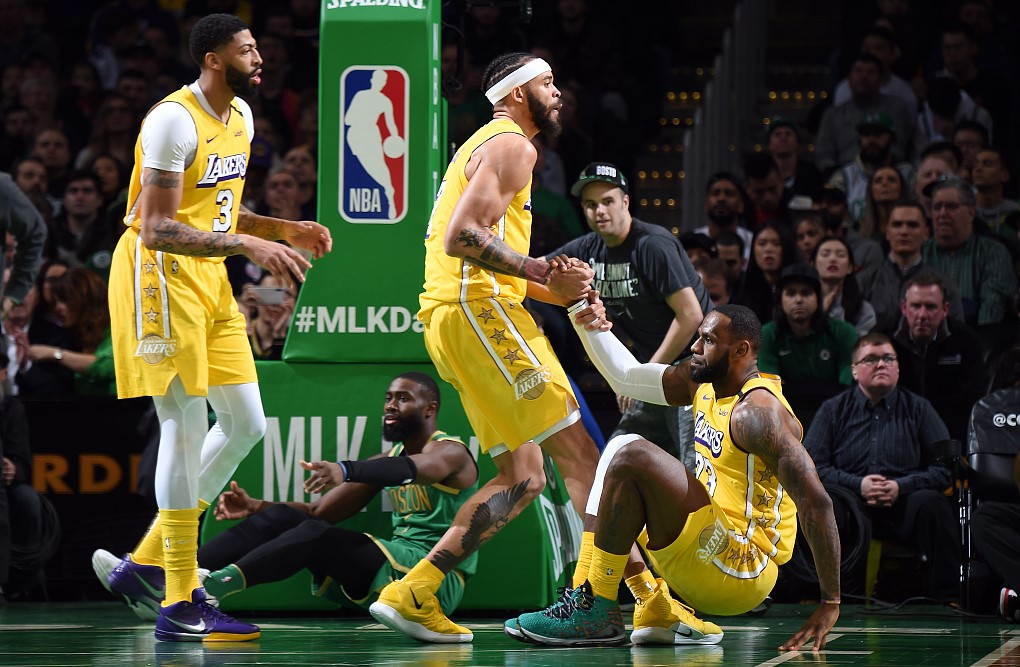 JaVale McGee (C) of the Los Angeles Lakers pulls his teammate LeBron James (R) up from the gloor in the game against the Boston Celtics at the TD Garden in Boston, Massachusetts, January 20, 2020.

Though James put down a pretty double-double of 15 points and 13 assists, he was not able to help the Lakers reverse the situation this time.

Besides, Davis who had rested several games because of injury, was definitely not in his best shape. The six-time All-Star big man fell into foul trouble and only played 22 minutes on the court. Meanwhile, he only took seven shots (made three) and grabbed simply four rebounds.

As for the rest of the purple and gold, when they could not make those open triples, their existence only made the team completely loss in front of the Celtics' zone defense. 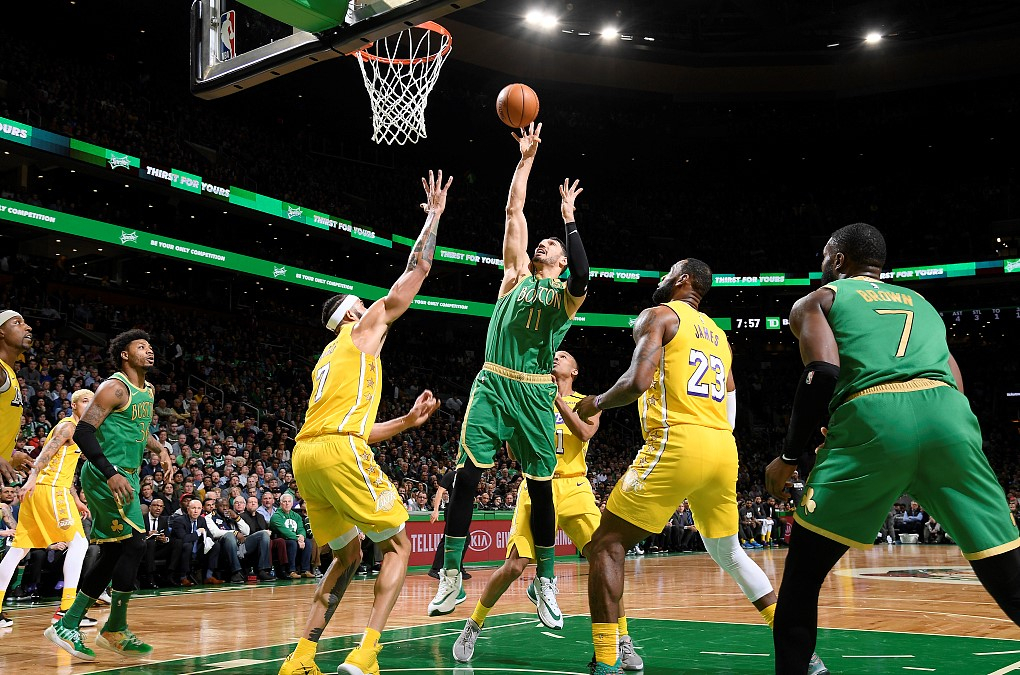 Enes Kanter, #11 of the Boston Celtics, shoots the ball in the game against the Los Angeles Lakers at the TD Garden in Boston, Massachusetts, January 20, 2020.

By contrast, the Celtics saw five of their players score double-digit points and three reached 20+. Enes Kanter enjoyed a remarkable field goal rate of 80 percent and put down 18 points and 11 rebounds in 24 minutes. Tatum was 5-8 from the 3-point line to get game-high 27 points. Both Brown and Walker had 20 points and Brown finished an incredible dunk over James.

"Just being aggressive and made a play at the rim. ... I'm not gonna lie. It was pretty nice," said Brown of the dunk after the game. 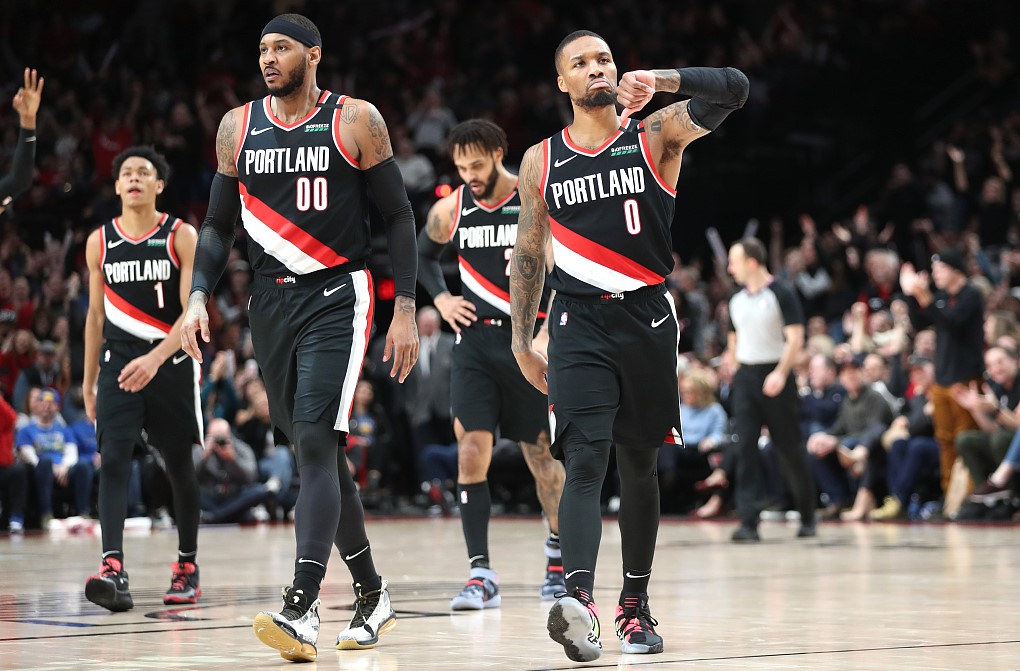 Damian Lillard, #0 of the Portland Trail Blazers, does his signature "checking the time" move in the game against the Golden State Warriors at the Moda Center in Portland,  Oregon, January 20, 2020.

What does it take to make Damian Lillard go full power on offense? First, he needs to be the only reliable playmaker of the team; second, Rip City must be in trouble; third, the Trail Blazers are playing the Warriors.

All three conditions were met on Monday. C.J. McCollum sat on the game; the Trail Blazers only rank tenth in the West; they were hosting the Warriors at the Moda Center.

As a result, there came "Lillard Time." Having made 17 of 37 assists, including 11 3-pointers and 16 free throws, Lillard scored career-high 61 points to help Portland claim a comeback victory at home. 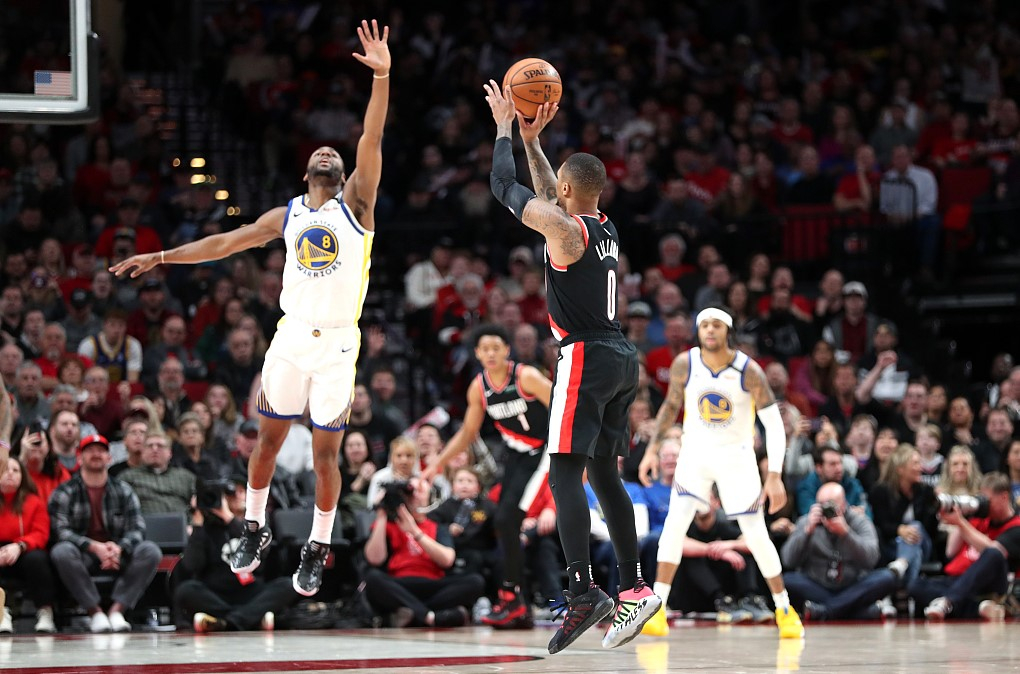 Damian lillard, #0 of the Portland Trail Blazers, shoots the ball in the game against the Golden State Warriors at the Moda Center in Portland,  Oregon, January 20, 2020.

Fourteen points in Q2, 21 points in Q3, game-tying triple in Q4, another game-drawing three in overtime, and the last two game-winning free throws, Lillard did everything he could to pull Portland from trailing to the final win in the game against Golden State.

This is his second 60+point game in 73 days and made Lillard the sixth player in NBA history to have multiple 60+point games (2) after Wilt Chamberlain (32), Kobe Bryant (6), Michael Jordan/James Harden (4) and Elgin Baylor (3).

"This is the kind of game I needed to have for us to win," said Lillard after the game.

Jrue Holiday, #11 of the New Orleans Pelicans, drives towards the rim in the game against the Memphis Grizzlies at the FedExForum in Memphis, Tennessee, January 20, 2020.

The Pelicans rained a franchise-record 21 3-pointers at the FedExForum to put an end to the Grizzlies' seven-straight-win streak. The return of Jrue Holiday became the Pelicans' key to this victory. Having rested seven games, he taught rookie star Ja Morant a good lesson. In offense, Holiday was 12-18 in field goals and made seven 3-pointers to drop game-high 36 points. In defense, he made Morant 5-14 in the game to get only 16 points.

Brandon Ingram though struggled in the first three quarters to make only two field goals, he found his touch back in the last quarter to score 14 points. After Monday's game, the 22-year-old averaged 25.6 points, 6.8 rebounds and 4.3 assists at FG, 3-point and free throw rates of 47.8, 40.1 and 85.5 percent respectively. With 38 games to this season, Ingram is getting close reaching 50/40/90 record. 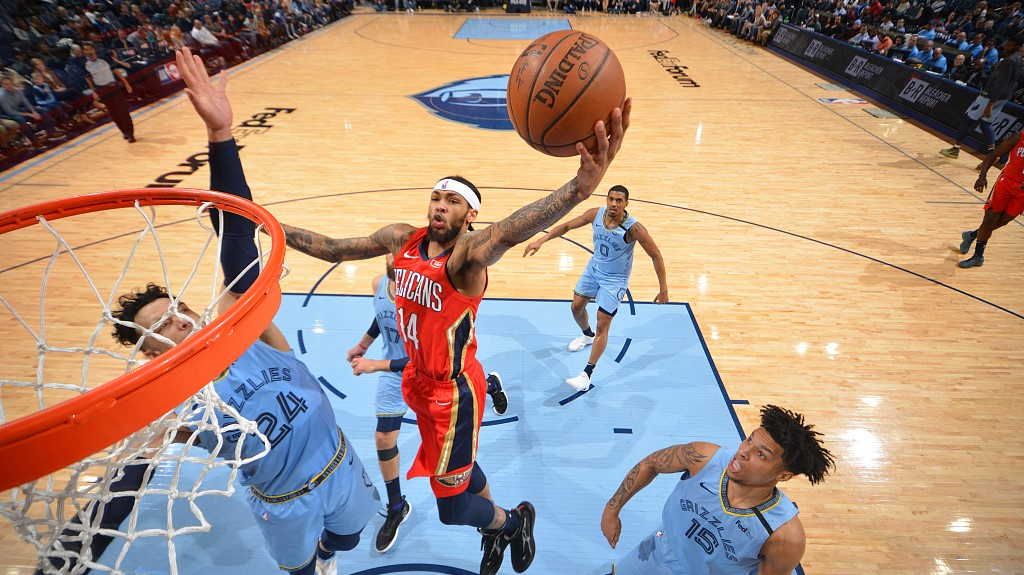 Brandon Ingram, #14 of the New Orleans Pelicans, drives towards the rim in the game against the Memphis Grizzlies at the FedExForum in Memphis, Tennessee, January 20, 2020.

New Orleans' win Monday made the competition for No. 8 spot in the West even more tense. Currently, Memphis ranks eighth with 20-23, only 0.5 game above San Antonio. Portland and Phoenix follow as tenth and 11th, trailing 2.0 games behind Memphis. Though New Orleans are the 12th and 3.5 games away from 8th, they have won 10 of their recent 14 games, posing a very aggressive chasing trend. Besides, Zion Williamson is about to make his NBA debut on Wednesday.