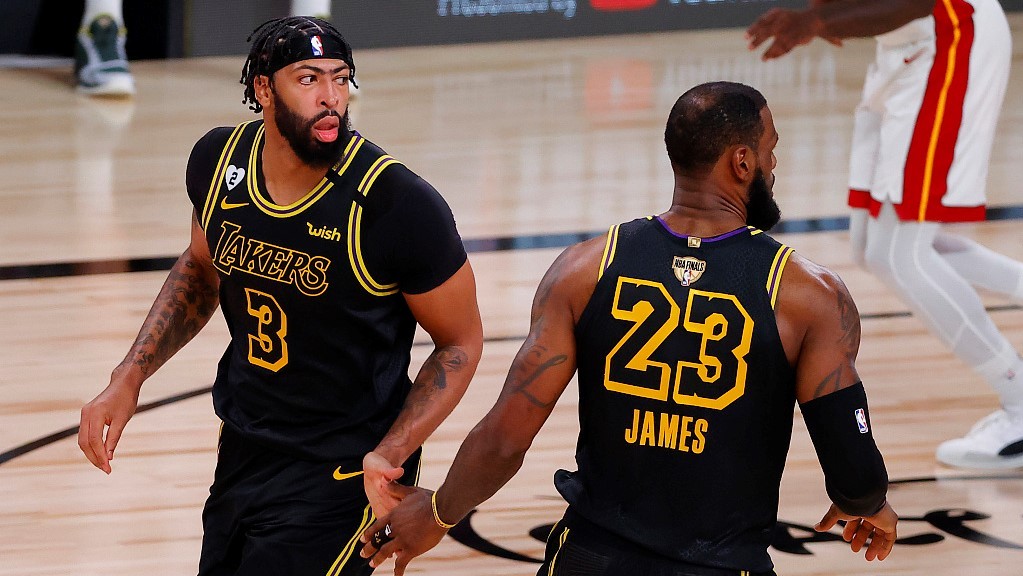 Anthony Davis #3 and Lebron James #23 of the Los Angeles Lakers in Game 2 of the NBA Finals against the Miami Heat at the AdventHealth Arena in Orlando, Florida, October 2, 2020. (Photos: VCG)

The Los Angeles Lakers beat the Miami Heat 124-114 in Game of the NBA Finals on Friday, leading the series 2-0.

Goran Dragic and Bam Adebayo of the Heat sat on this game because of injury. Coach Erik Spoelstra replaced them with Tyler Herro and Meyers Leonard in the starting lineup. Despite his 2.13-meter height, Leonard is nothing but a liability in defense. During the less than four minutes he played in the court, Dwight Howard went 3-3 to get six points over Leonard's head. 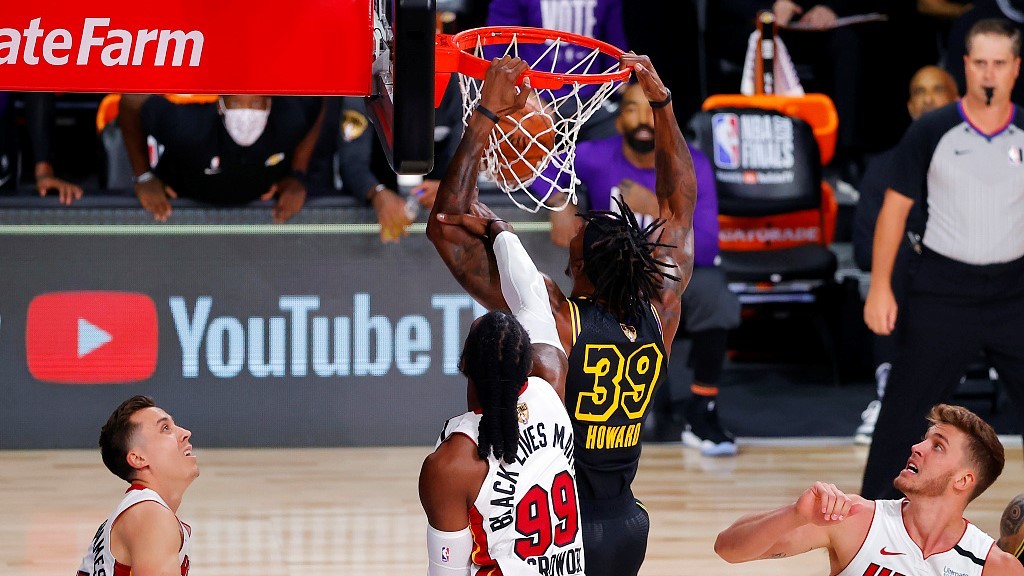 Dwight Howard #39 of the Los Angeles Lakers dunks in Game 2 of the NBA Finals against the Miami Heat at the AdventHealth Arena in Orlando, Florida, October 2, 2020.

After Kelly Olynyk was sent to the floor, the Heat switched to zone defense and did not make any major change until the game ended. However, such a defensive system of the Heat that put the Boston Celtics at the end of their tether for five games in the East Finals was destroyed by the Lakers with ease.

Usually, there were two ways to break through zone defense, either behind the 3-point line or from the middle range. The purple and gold found the third way: working in the high post. The Heat's zone defense was made of two defensive lines in the perimeter and the paint, leaving the free throw line open. That's where Anthony Davis received the ball and shot directly – he's too tall for Jar Crowder to deflect. In the second quarter, Davis drained four straight jumpers from the high post. 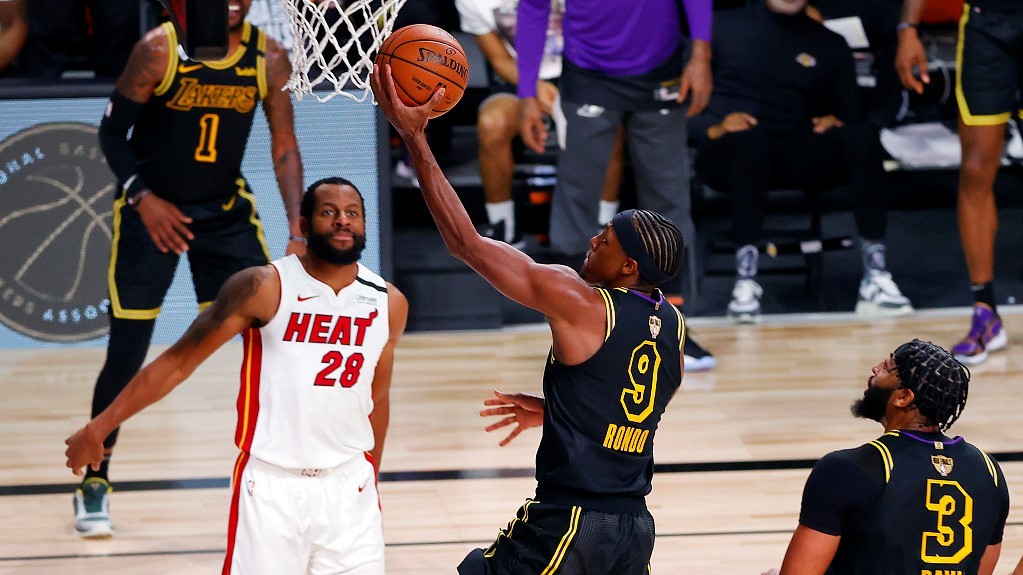 Rajon Rondo #9 of the Los Angeles Lakers makes a layup in Game 2 of the NBA Finals against the Miami Heat at the AdventHealth Arena in Orlando, Florida, October 2, 2020.

Then LeBron James followed suit while assisting his teammates in backdoor cuts and from downtown. The Heat tried to pressure him, but James went deeper to work in the baseline. Others might panic when they were trapped in the baseline, but James was not. On the contrary, he assisted two easy dunks after drawing defensive attention along the baseline.

Rajon Rondo joined the two from the third quarter. Though he was not as fast as he had been 10 years ago, Rondo's court vision, passing, and judgment still enabled him to tease the Heat's defenders. While delivering 10 assists, Rondo also made a floater and a turnaround layup from the high post. 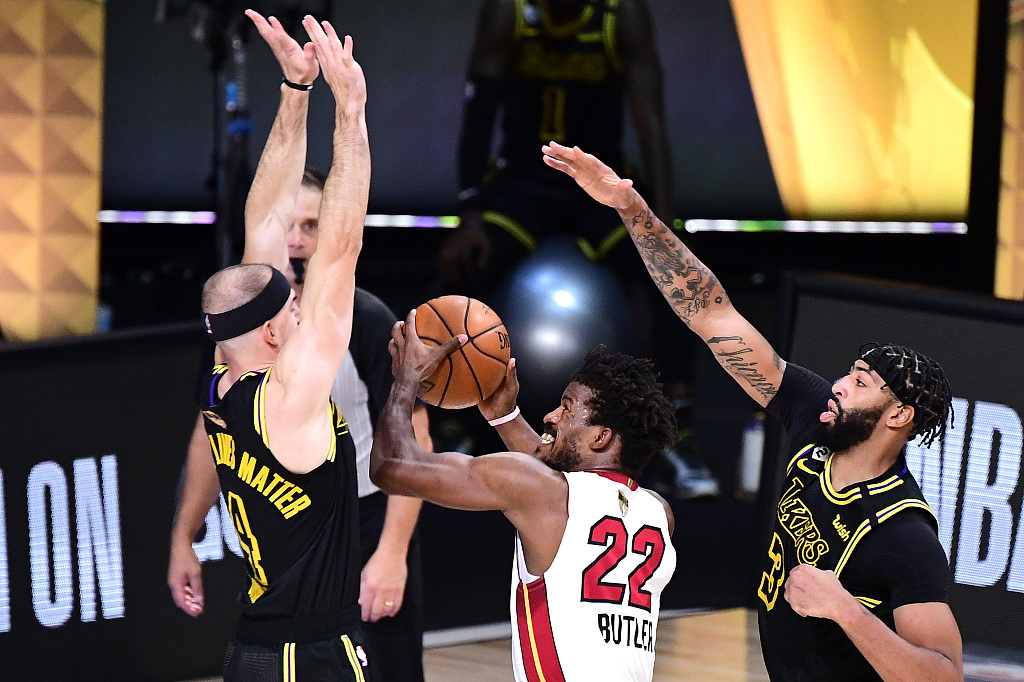 Jimmy Butler #22 of the Miami Heat tries to shoot the ball in Game 2 of the NBA Finals against the Los Angeles Lakers at the AdventHealth Arena in Orlando, Florida, October 2, 2020.

Of course, the Heat deserved praising for their resilience. Jimmy Butler charged at the head of his men by throwing himself at the Lakers' rim. He earned 12 free throws and made 11 of them while scoring eight rebounds and 13 assists. The rest of the team also showed their aggressiveness in the offense. The Heat drew 25 free throws in the first half.

Nonetheless, sometimes the gap in gifts could not be overcome. For example, when the Lakers kept putting the ball in to Davis' hands via lob pass in the second half, the Heat just did not know how to stop this long-limbed monster from scoring easy points, just like they did not know what to do when Davis kept grabbing offensive rebounds in the third quarter. 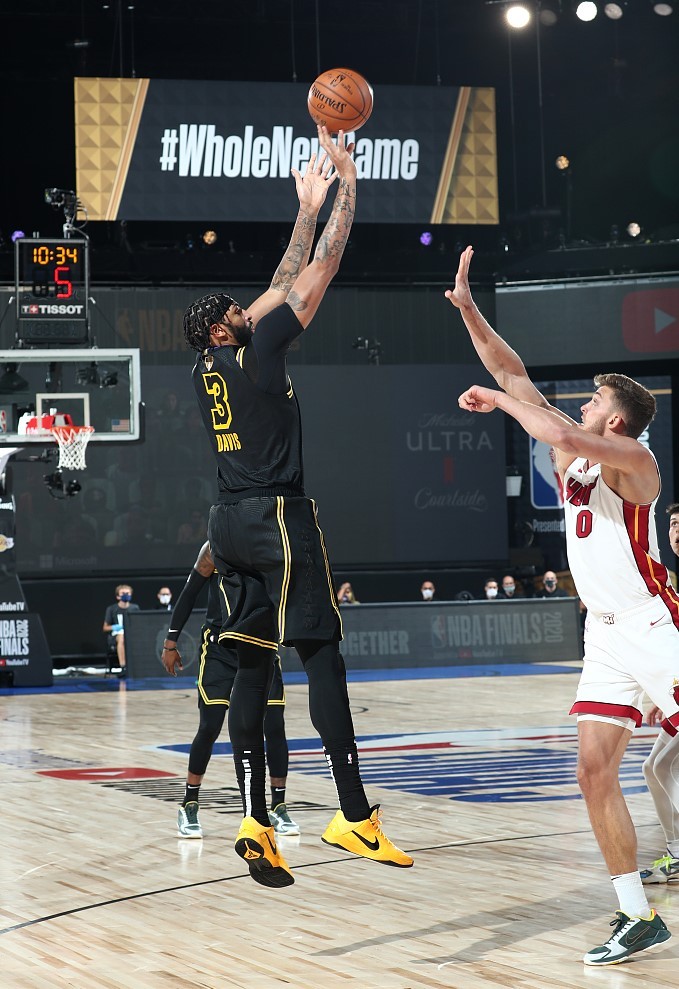 Anthony Davis #3 of the Los Angeles Lakers shoots the ball in Game 2 of the NBA Finals at the AdventHealth Arena in Orlando, Florida, October 2, 2020.

Davis went 15-20 to get 32 points, and 14 rebounds – eight of them were on the offensive glass. James put down 32+9+9. He was playing in a relaxed state most of the time, but when he needed to, James could still power his way into the paint for a solid two, regardless of the defender in front of him.

This was not a flawless game for the Lakers. Though the team buried 16 triples as a whole, the general 3-point rate of 34.04 percent was not pretty, not to mention that two of their starting shooters, Danny Green and Kentavious Caldwell-Pope, together were 3-19 from the 3-point line. 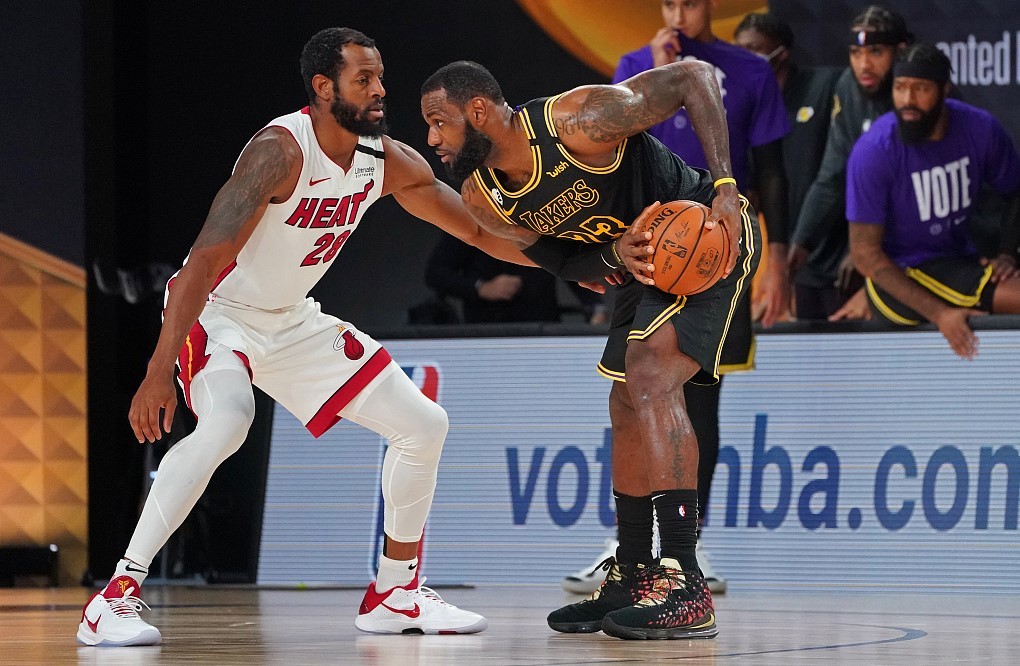 LeBron James (R) of the Los Angeles Lakers faces Andre Iguodala of the Miami Heat in Game 2 of the NBA Finals at the AdventHealth Arena in Orlando, Florida, October 2, 2020.

However, they still won. The purple and gold relied on the veterans' experience and wisdom in penetrating the opponents' zone defense, but it took the absolute true gifts to win the game. The Lakers have it, but the Heat don't.