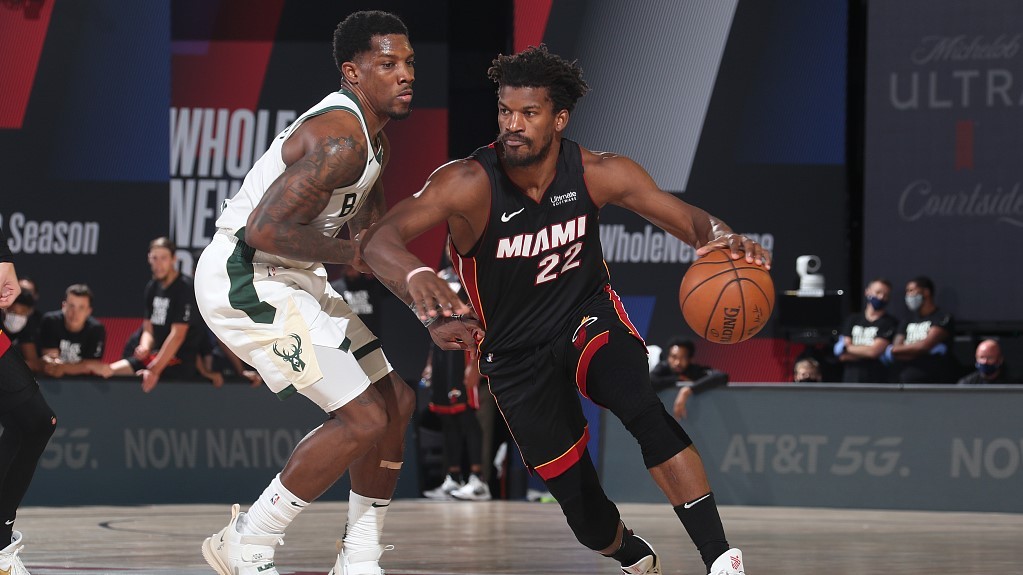 Jimmy Butler #22 of the Miami Heat tries to penetrate in Game 5 of the NBA Eastern Conference Semifinals against the Milwaukee Bucks at the Field House in Orlando, Florida, September 8, 2020. /VCG

The Miami Heat beat the Milwaukee Bucks 103-94 in Game 5 of the Eastern Conference Semifinals on Tuesday, winning the series 4-1 and making the Conference Finals first. They will be waiting for the winners between the Boston Celtics and the Toronto Raptors.

Milwaukee worked hard despite the absence of Giannis Antetokounmpo, who sat on this game. They managed to limit Miami's points in the paint to 32, 3-pointers to 11 (at a 3-point rate of 35.48 percent), and even forced 21 turnovers by the opponents. 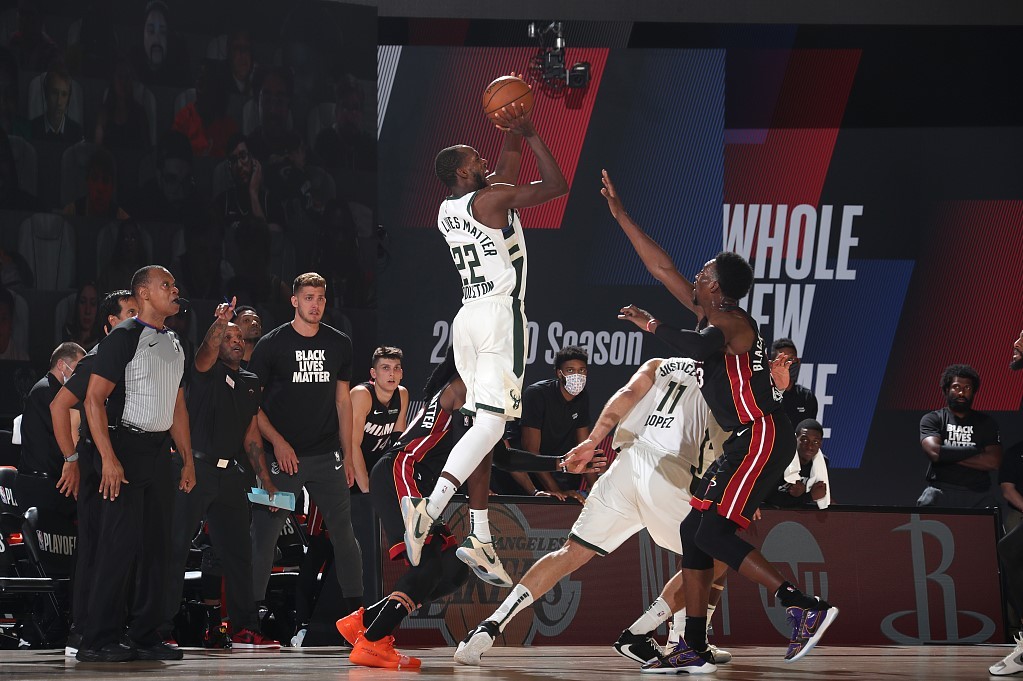 Khris Middleton #22 of the Milwaukee Bucks shoots the ball in Game 5 of the NBA Eastern Conference Semifinals against the Miami Heat at the Field House, September 8, 2020. /VCG

However, the great defensive performance of Milwaukee could not remedy their offensive underperformance. Their main scorers, Khris Middleton, Broo Lopez, and Eric Bledsoe, went 8-25, 7-16, and 2-12, respectively, in field goals. The whole team only drilled nine triples at a 3-point rate of 27.27 percent, and they only turned Miami's 21 turnovers into ten fast breakpoints.

Antetokounmpo sat by the side of the court, watching his teammates fight till the end. This was the second straight time for Milwaukee to be eliminated from the playoffs as the league's leading team. Antetokounmpo was the regular season Most Valuable Player last season, and he should receive the award this season too though he never knew what it was like to play in the NBA Finals.

So that question must be asked and this time by Chris Haynes of Yahoo Sports: Will the Greek Freak leave Milwaukee? 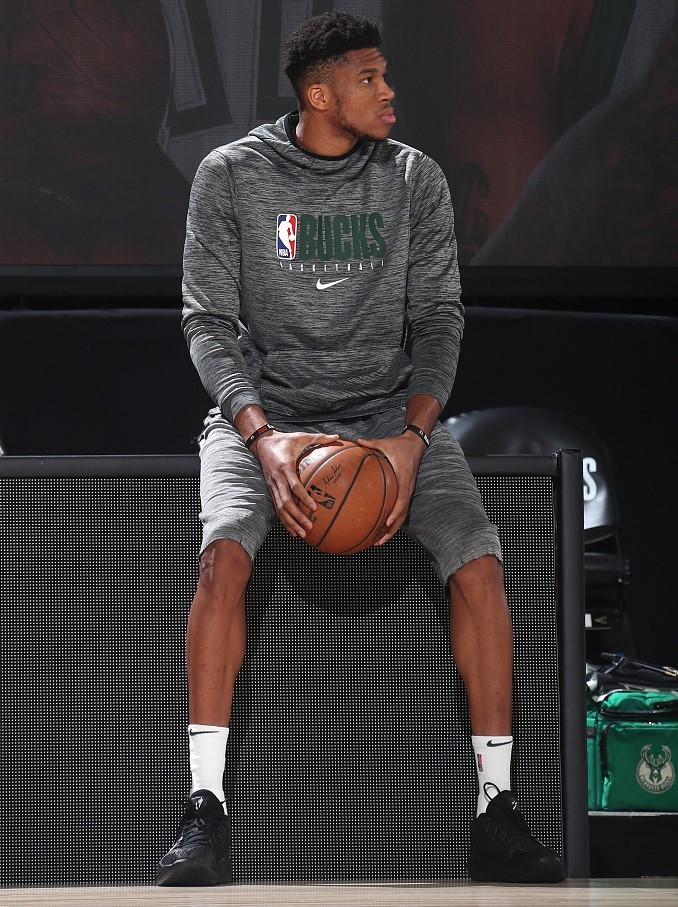 Giannis Antetokounmpo of the Milwaukee Bucks before Game 5 of the NBA Eastern Conference Semifinals against the Miami Heat at the Field House, September 8, 2020. /VCG

Antetokounmpo will become an unrestricted free agent in 2021 summer. Despite the losses in these two years, no general manager can say no to his talents and possibilities – he is only 25 years old, just so you know – if they want to keep their job. Sure he lacks shooting range; his court vision is not good enough; his posting skills are as rough as his touch, but as soon as he improves any of those skills, Antetokounmpo will be reborn.

"It's not happening. That's not happening," said Antetokounmpo to Haynes. "Some see a wall and go in (another direction). I plow through it. We just have to get better as a team, individually and get right back at it next season. We lost. Everyone saw that we lost. It's disappointing, but what are we going to do? We're going to keep working. I've got confidence in my teammates." 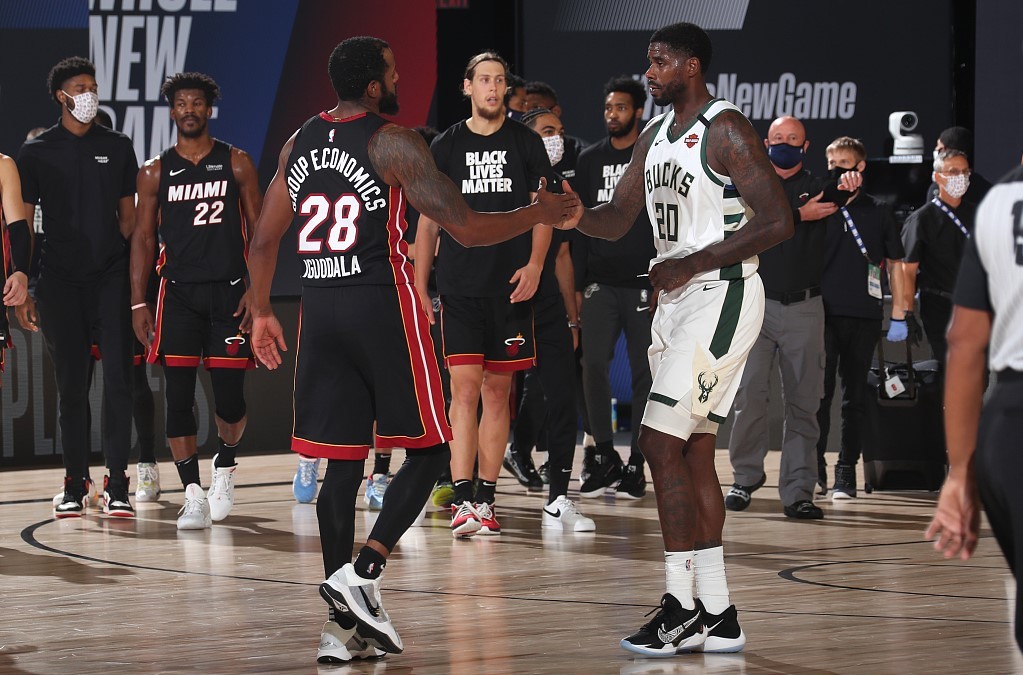 Marvin Williams #20 of the Milwaukee Bucks and Andre Iguodala #28 of the Miami Heat give each other high-fives after Game 5 of the NBA Eastern Conference Semifinals at the Field House, September 8, 2020. /VCG

Perhaps Antetokounmpo will not depart Milwaukee this year, but someone is saying goodbye to the league. 34-year-old Marvin Williams announced his decision to retire after Tuesday's game, putting an end to his 15-year-long NBA career.

"I've been very blessed. God has been very, very good to me," said the second-overall select of the 2005 NBA Draft. Having played 15 seasons in four teams – the Atlanta Hawks, the Utah Jazz, the Charlotte Hornets, and the Bucks – Williams averaged 10.2 points, 5.3 rebounds, and 1.2 assists per game. 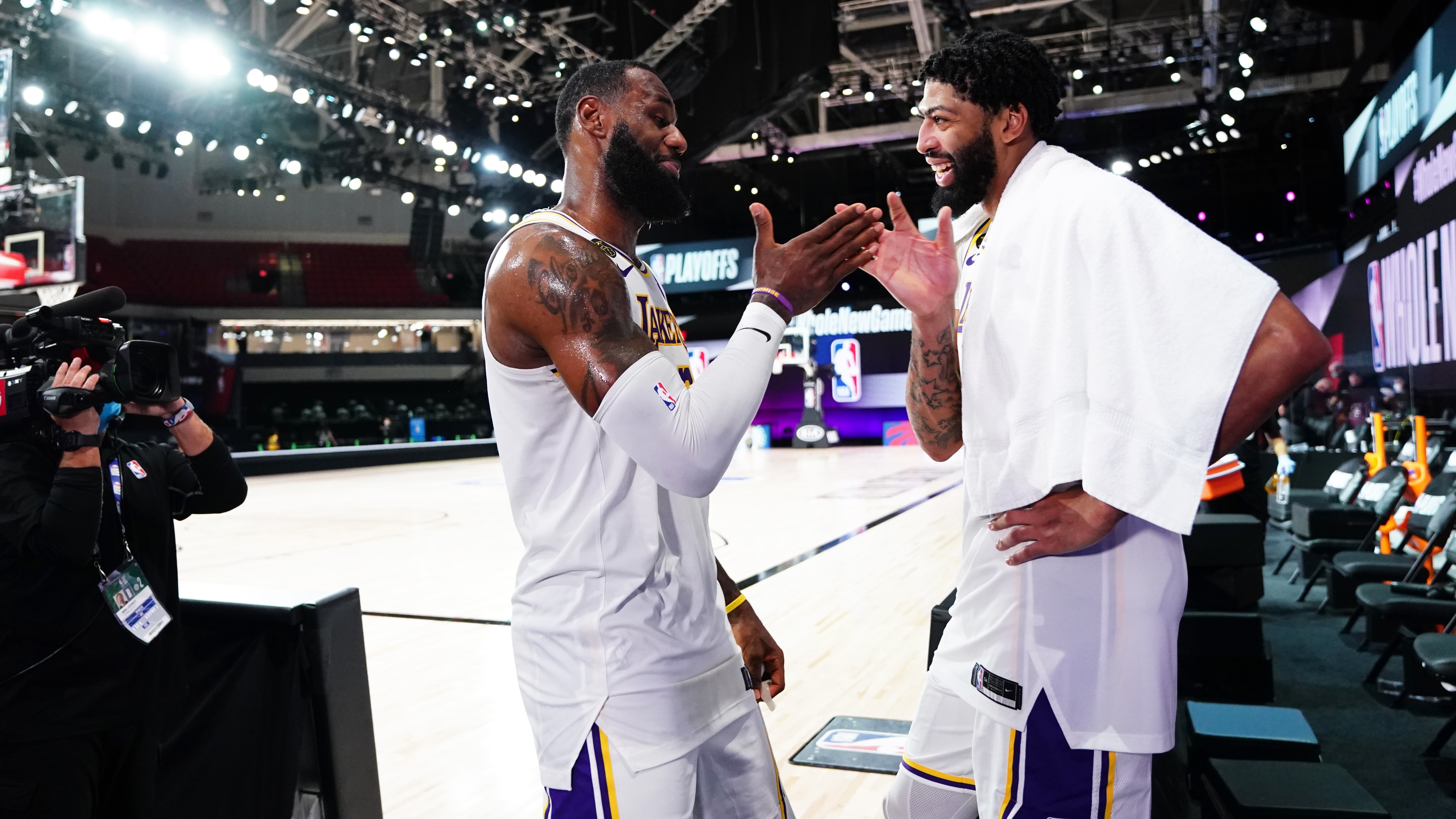 LeBron James (L) and Anthony Davis of the Los Angeles Lakers celebrate after their 112-102 win over the Houston Rockets in Game 3 of the NBA Western Conference Semifinals at the AdventHealth Arena in Orlando, Florida, September 8, 2020. /VCG

Superstars do whatever their team require to win

The Los Angeles Lakers defeated Houston Rockets 112-102 in Game 3 of the Western Conference Semifinals, leading the series 2-1. LeBron James was the purple and gold's best-performing one on Tuesday night as he dropped 36 points, seven rebounds, five assists, and four blocks.

Twenty-nine of James' points happened in the first half when both teams were cooking. James was 4-6 under the rim while burying three triples and three perimeter shots to help the Lakers lock horns with the Rockets. 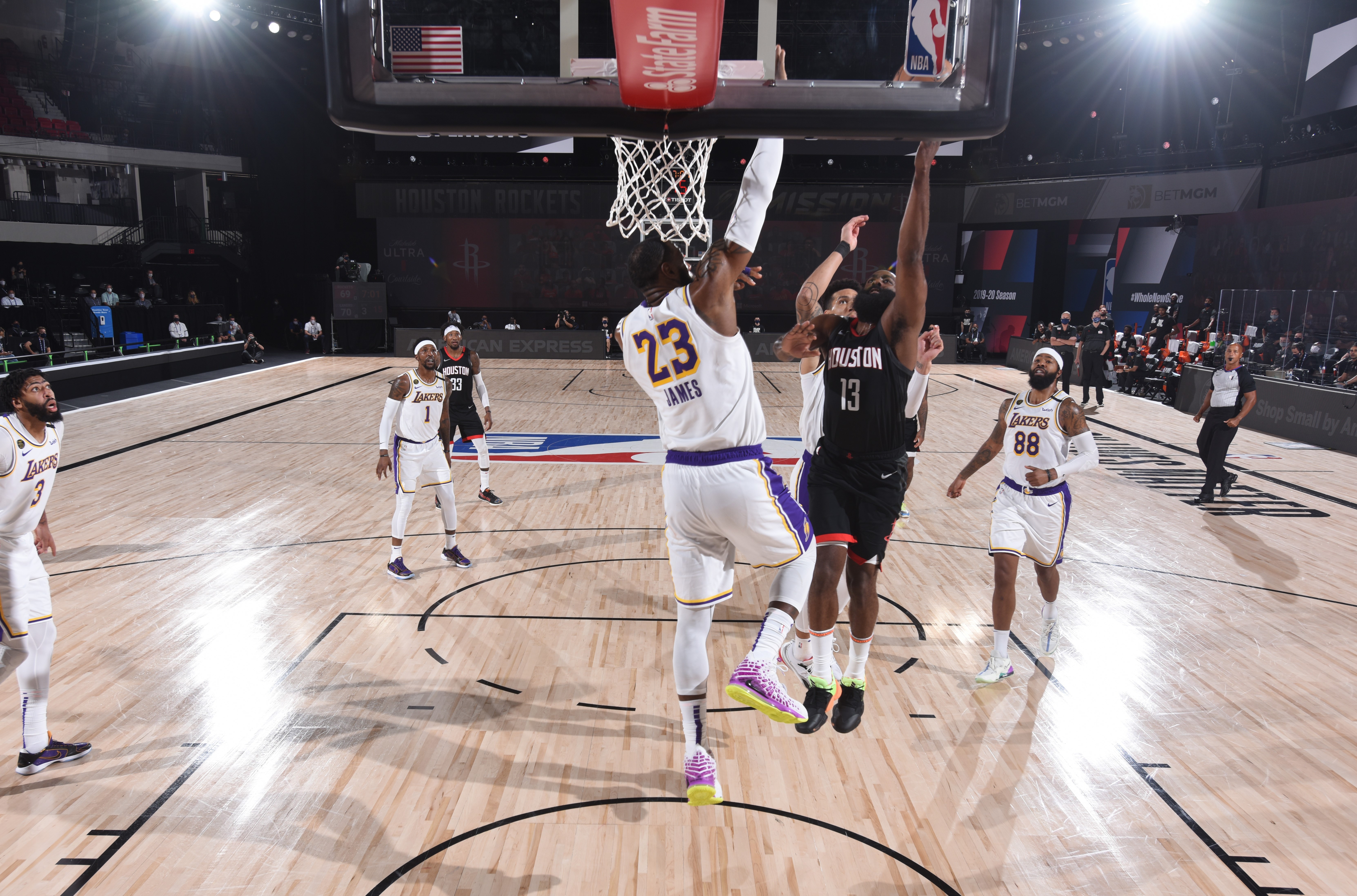 LeBron James #23 of the Los Angeles Lakers tries to deny a shot by James Harden #13 of the Houston Rockets in Game 3 of the NBA Western Conference Semifinals at the AdventHealth Arena, September 8, 2020. /VCG

The second half was about defense, and James delivered four blocks in the third quarter alone. In simply 24 seconds, he denied two shots by James Harden and Eric Gordon. In defense, the existence of him and Anthony Davis limited the Rockets' point to 25 in the second half until the last six minutes of the last quarter.

Davis scored 26 points, which came from efficient 9-13 FGs. He also grabbed 15 rebounds, including four on the offensive glass. His trapping of Harden with teammates, patrolling defense and were all key contributions to the Lakers' victory. Rajon Rondo became the purple and gold's biggest ingenious hand, as he was involved with 23 of the team's 30 points in Q4. 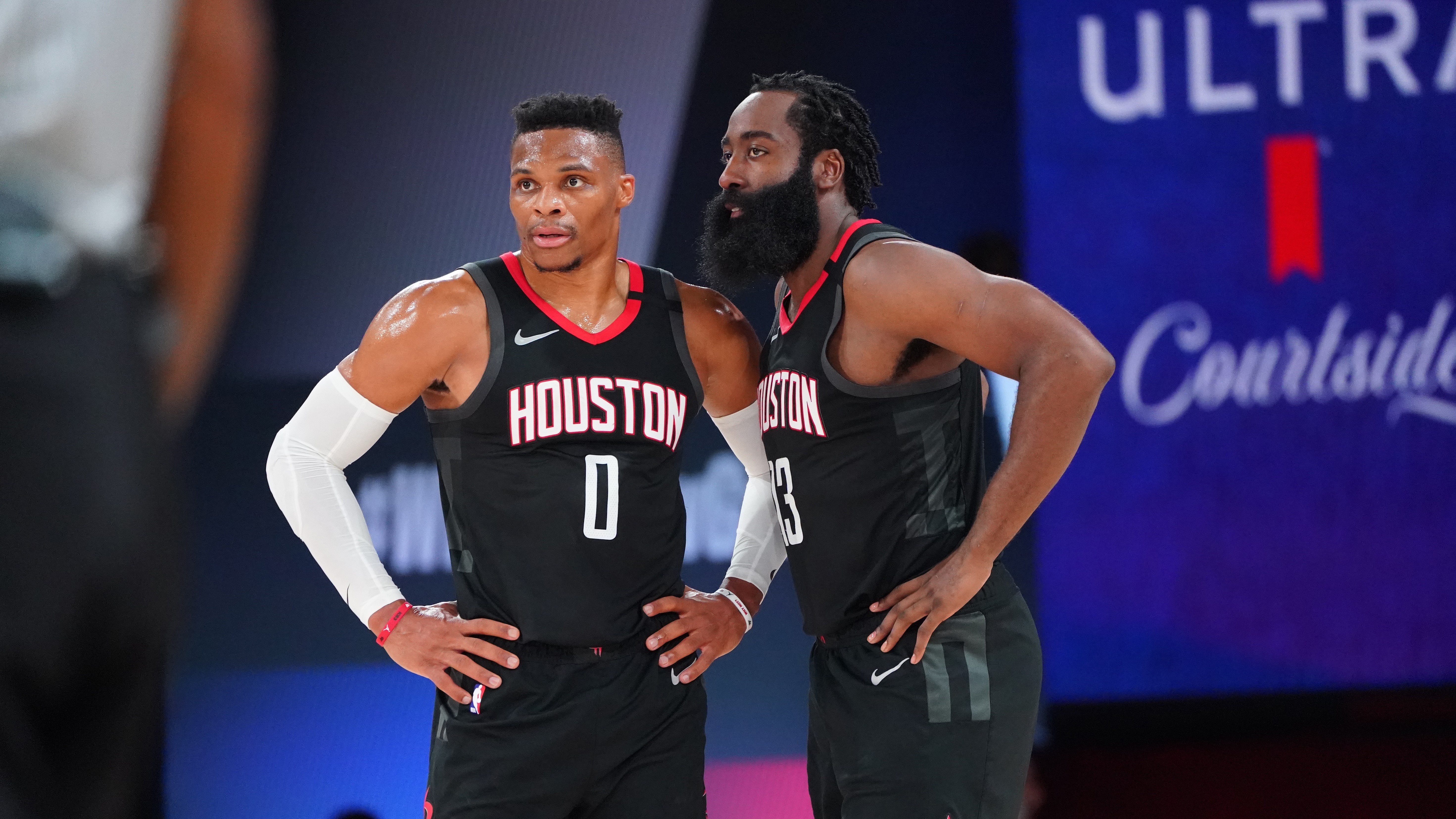 Russell Westbrook #0 and James Harden of the Houston Rockets communicate with each other in Game 3 of the NBA Western Conference Semifinals at the AdventHealth Arena, September 8, 2020. /VCG

Harden and Russell Westbrook, though put down 33 and 30 points respectively, both fell into trouble in the second half. Harden was constantly trapped by the Lakers' defense and only took seven attempts in the last two quarters. Westbrook committed too many turnovers, which gave the opponents multiple chances for early offense.