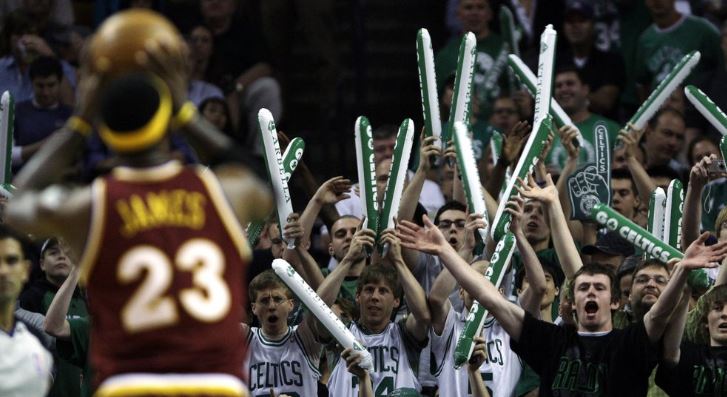 Boston Celtics fans try to distract Cleveland Cavaliers forward LeBron James (23) while he shoots foul shots during the first quarter of Game 3 in the second round of an NBA basketball playoff series in Boston on May 7, 2010. (File photo: AP)

The NBA has told teams that playoff seeding will be based on winning percentage, and that any tiebreakers necessary after that will follow the usual procedures.

It was an issue that needed clarity because the 22 teams that will be going to the Disney complex near Orlando, Florida, for the planned resumption of the season next month will not have played the same number of games.

The NBA told teams of the plan for utilizing tiebreakers in a memo late Friday.

Based on the league plan for the restart, with games starting again in late July, Dallas will end up playing an NBA-high 75 contests. Most others will play between 72 and 74; the low total will be 71, which San Antonio and the Los Angeles Lakers will finish at if the NBA’s plans for teams to play eight games at the Disney complex before the playoffs begin comes to fruition.

The NBA has not yet revealed how team schedules will be adjusted once play resumes without Atlanta, Charlotte, Chicago, Cleveland, Detroit, Golden State, Minnesota and New York taking part in the remainder of the 2019-20 season.

There are some playoff races that are particularly close and where the teams involved will end up playing a different number of games.

In the East, Brooklyn and Orlando are separated by a half-game and the Nets will end up with one less game than the Magic.

In the West, four teams — Portland, New Orleans, Sacramento and San Antonio — are all separated by a half-game in the race for ninth place and potentially a berth in a play-in series. The gap between those four teams is .010 percentage points, and the Trail Blazers will play 74 games, the Pelicans and Kings will both play 72 and the Spurs 71.

Typically, NBA teams play 82 games — which wasn’t possible this season because of the coronavirus pandemic and the suspension of the season on March 11.

This will be the first season in which NBA teams play an uneven number of games since 2012-13, when a game between the Boston Celtics and Indiana Pacers was canceled in response to the Boston Marathon bombing. The Celtics and Pacers finished at 81 games, though that did not have any impact on playoff seeding that season.