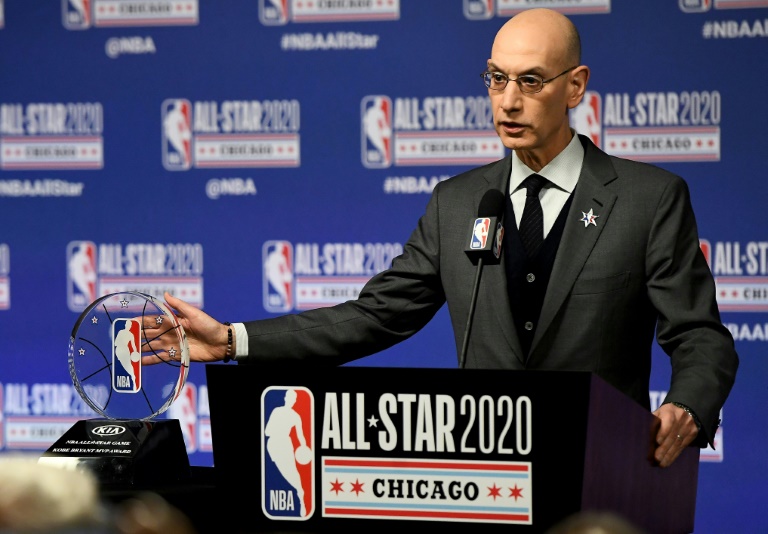 NBA commissioner Adam Silver will hold a conference call with players on Friday as the league ponders how to return to play. (Photo: AFP)

NBA commissioner Adam Silver and the head of the players union, Michele Roberts, will host a conference call on Friday as the league attempts to map out a possible return to action, ESPN reported.

The call between Silver and NBA Players Association executive director Roberts is an opportunity for players to air concerns and quiz basketball chiefs about how the league may resume.

The NBA has been in shutdown since the coronavirus pandemic brought sport to a standstill in mid-March, forcing the suspension or postponement of every professional league in North America.

Since then, the NBA has been exploring ways for the sport to resume.

Friday marks the first day that teams in the league will be allowed to reopen practice facilities for limited workouts, which will take place under strict safety protocols.

A handful of teams have indicated they plan to take advantage of the green light to return to practice facilities but many franchises have said they intend to wait.

Los Angeles Lakers head coach Frank Vogel said Wednesday he is in no rush to reopen the team's El Segundo training base, believing that any resumption of the NBA was still a distant prospect.

"There's a competitive balance element to this that I personally am not really all that concerned about," Vogel said.

"I think we're still a long way away from returning to play."

Dallas Mavericks owner Mark Cuban is also lukewarm about returning to practice while there remained so much uncertainty about the testing of asymptomatic individuals for COVID-19.

"Even though we can try and take all different kinds of precautions, it's just not worth it -- particularly when our guys are staying in shape and they're going outside and shooting on outdoor hoops and working out in various ways," Cuban told The Athletic website's "77 minutes in Heaven" podcast. "I just don't think the risk is worth the reward."