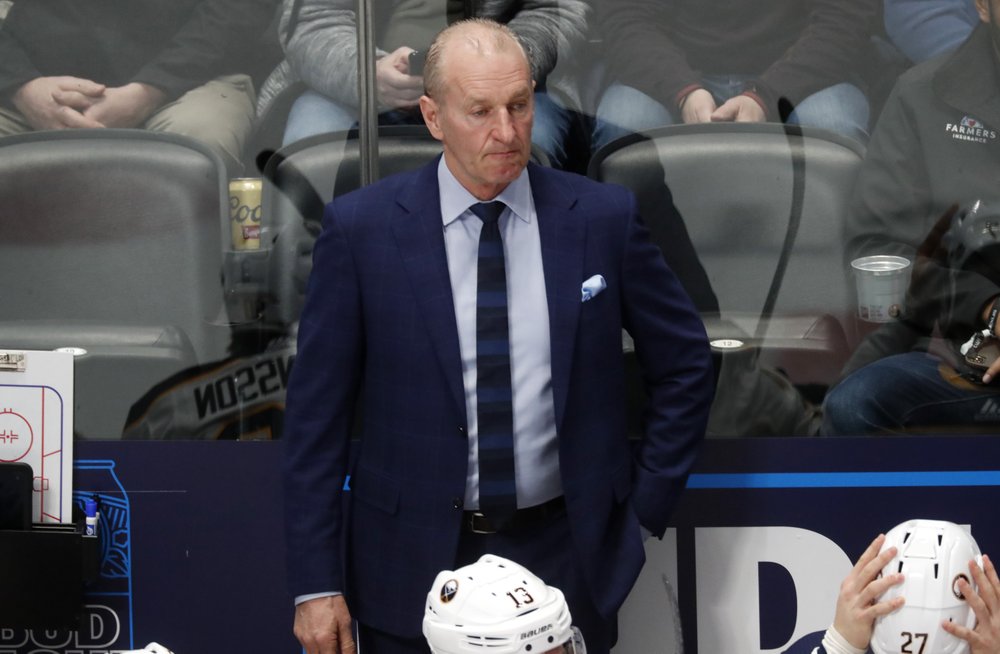 The Latest on the effect of the coronavirus outbreak on sports around the world:

South Carolina men’s basketball coach Frank Martin isn’t sure athletes from winter sports should get another year of eligibility despite missing the sport’s premiere event, the NCAA Tournament.

Martin said Monday that only a small percentage of college seniors are included in the sports’ postseason tournaments. He says the vast majority completed their seasons before conference tournaments and other postseason events were canceled because of the coronavirus pandemic.

Martin’s Gamecocks had their opening game of the SEC Tournament called off two weeks ago.

The NCAA is expected to vote on granting eligibility for athletes affected by COVID-19 on March 30.

Martin says he’s struggling with giving another full season to players simply because they missed out on the championship phase of college basketball’s year. He says: “I get that’s a hard decision and a decision that eventually has to be made.”

The team announced that the Haslams have earmarked $1 million to the Greater Cleveland COVID-19 Rapid Response Fund and $500,000 to the Columbus Foundation’s Emergency Response Fund.

The Haslams also own the Columbus Crew in the Major Soccer League.

Their gift follows contributions by Browns quarterback Baker Mayfield, who donated $50,000 to the Greater Cleveland Food Bank and defensive tackle Larry Ogunjobi’s donation of 100,000 meals to the food bank.

Buffalo Sabres coach Ralph Krueger is trying to remain patient while biding his time back home in Switzerland and hoping the NHL’s regular season will resume eventually.

Krueger says he’s “still hanging on to the possibility,” and adds he’s been trying “not to let my brain go there until that plug is actually pulled on us.”

Krueger spoke to Buffalo-area reporters during a conference call Monday, 12 days after the NHL postponed its season because of the coronavirus pandemic. The Sabres were waiting to play a game in Montreal on March 12 when the league announced its decision. The team then flew home.

The first-year Sabres coach and the players remained in Buffalo through the weekend in anticipation that teams would eventually be allowed to hold practices. He booked a flight to Switzerland once the NHL pushed back its timeline from a two-week break to 45 days.

Krueger keeps in touch with players and team management by text, and says he has no knowledge of any Sabres testing positive for COVID-19.

The Sabres had 13 games remaining and had fallen out of playoff contention.

Krueger believes there is still much to be gained for the Sabres to continue playing, but adds he’ll abide by whatever decision the NHL reaches on whether to resume the regular season.

As for the possibility of the NHL holding its playoffs in the summer and awarding the Stanley Cup as late as September, Krueger said “there’s nothing that I cannot imagine as an option.”

The president of the Portuguese Olympic Committee says he hopes the Tokyo Games are postponed.

José Manuel Constantino says “the most reasonable thing is for the IOC, the Tokyo organizing committee, the Tokyo government and the Japanese authorities to find a consensual solution to allow the Tokyo Games to take place on another date.”

Constantino was speaking to Rádio Observador.

He says “I hope the games are postponed.”

Constantino’s comments come a day after the IOC said it was considering a postponement and would make a final decision within four weeks.

Constantino says Portugal’s Olympic team is not prepared at the moment, adding “some athletes found alternative ways to prepare themselves, but others don’t have the conditions to do so.”

Pacaembu Stadium in São Paulo is being turned into an open-air hospital to help fight the coronavirus outbreak.

The 45,000-seat stadium that was built for the 1950 World Cup is expected to have more than 200 beds and should be ready in 10 days. Construction began on Saturday.

The president of the Norwegian Olympic Committee is recommending that athletes from the country are not sent to the Tokyo Games if they take place as scheduled.

Berit Kjøll says “it will not be possible to carry out a Tokyo Olympics and Paralympics in July as planned” because of the growing coronavirus outbreak.

Kjøll says she respects the IOC’s request to “come up with a well thought-out and good plan for when the games can be completed.”

The Norwegian federation previously had said the Tokyo Olympics should only to take place once the coronavirus outbreak “is under firm control” worldwide.

The Canadian Olympic Committee has said it will not be sending athletes to the Olympics unless the games are postponed by a year. Australia says it was advising its athletes to prepare for an Olympics in 2021.

Basketball governing body FIBA is telling players around the world to stay inside.

FIBA president Hamane Niang and secretary general Andreas Zagklis says that in “no circumstance should our passion to play basketball surpass the importance of following the instructions of the public authorities” when it comes to helping ensure public health.

FIBA also is monitoring the Olympic developments as the world begins bracing for — and in some cases, advocating for — a postponement of this year’s Tokyo Games. Since qualifying is not yet completed, FIBA says “there is a growing need for answers to be provided quickly.”

Niang and Zagklis added that “we will not ask our players to go somewhere, where we would not send our own children.”

Russia has backed the International Olympic Committee’s approach of taking time to consider postponing the Tokyo Games and condemned the body’s critics.

The IOC says it will make a decision within four weeks and the Russian Olympic Committee endorsed that plan by calling for “complete support.”

The ROC says “we view as unacceptable any attempts to bring pressure on the organizations in charge responsible of staging the games and to force them to take rash decisions.”

Canada has said it will boycott the Tokyo Olympics unless they are postponed and Australia has called for athletes to prepare for a 2021 event.

Russia was faced with sending a neutral team to the Tokyo Olympics under sanctions from the World Anti-Doping Agency. But those measures can’t be implemented until there’s a ruling from the Court of Arbitration for Sport, where hearings have been delayed by the coronavirus outbreak. It’s unclear whether CAS could still rule before the Tokyo Olympics are scheduled to start July 24.

The Spanish soccer federation and the Spanish league say the suspension of professional soccer in the country will continue until government officials “consider that they can be resumed without creating any health risk.”

The soccer competitions had been initially suspended for two weeks, but on Sunday the government said the country’s state of emergency would likely be extended, meaning the entire nation may have to remain in lockdown until at least April 11.

Spanish authorities say more than 33,000 people have been infected with the coronavirus in the country, with 2,182 deaths.

The Azerbaijan Grand Prix has been postponed because of the coronavirus outbreak.

The latest postponement means there will be no Formula One races until the middle of June at the earliest.

The race at the Baku City Circuit was scheduled for June 7.

The first seven races of the Formula One season had already either been postponed or canceled.

A group representing track and field athletes has called for the Tokyo Olympics to be postponed because of the coronavirus outbreak.

The Athletics Association’s statement comes a day after the International Olympic Committee set itself a four-week deadline to decide on a delay.

Taylor is a long jumper and Coburn is a runner. Both competed for the United States at the 2016 Rio de Janeiro Olympics.

The group says more than 4,000 athletes have responded to a survey it conducted, with a large majority favoring postponement.

Dina Asher-Smith, the world champion in the 200 meters, has also called for a quicker decision by the IOC.

The British sprinter writes on Twitter “does this mean that athletes face up to another FOUR weeks of finding ways to fit in training - whilst potentially putting ourselves, coaches, support staff and loved ones at risk just to find out they were going to be postponed anyway.”

The Australian Olympic Committee has advised its athletes to prepare for an Olympics in 2021.

“Our athletes have been magnificent in their positive attitude to training and preparing, but the stress and uncertainty has been extremely challenging for them,” Chesterman said in a statement released Monday by the Australian Olympic Committee.

AOC chief executive Matt Carroll says Australia has athletes based overseas and training in central locations around the country.

“With travel and other restrictions this becomes an untenable situation,” Carroll said.

The Canadian Olympic Committee earlier said it won’t send athletes to the Tokyo Games unless they are postponed for a year, becoming the first country to threaten such a move in the face of the coronavirus pandemic.

The committee sent out a statement Sunday evening saying it was willing to help the IOC search for alternatives, but that it was not safe for athletes, “their families and the broader Canadian community for athletes to continue training for these games.”

The IOC says it is considering all options. The Tokyo Games are scheduled to start July 24.

Japanese Prime Minister Shinzo Abe says a postponement of the Tokyo Olympics would be unavoidable if the games cannot be held in a complete way because of the coronavirus impact.

He was commenting on the International Olympic Committee plan to examine the situation over the next few weeks and make a decision, which could include a postponement.

Abe, speaking at a parliamentary session, ruled out the possibility of a cancellation.

Whether Tokyo can hold the Olympics as planned from July 24 has been a major international concern as the COVID-19 pandemic has spread globally.