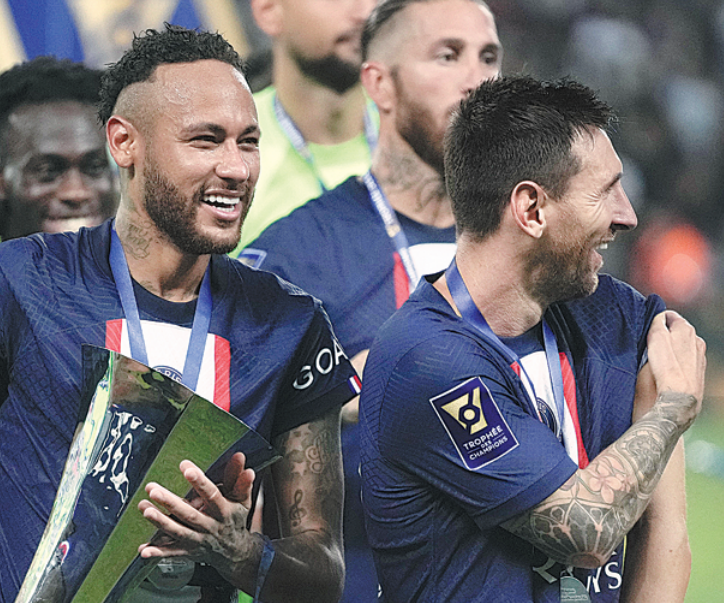 After an underwhelming first season in French soccer, Messi struck 22 minutes into the traditional curtain-raiser, which was played in Israel for the second year in a row.

Neymar, whose future at the club has been the source of much speculation this summer, doubled the lead just before the break with a magnificent freekick.

Sergio Ramos added a third and Neymar bagged his second late on from the penalty spot as PSG, the reigning Ligue 1 champion, eased to victory over last season's French Cup winner.

"It was a good match. There was a trophy on the line so we wanted to win it," Neymar told Prime Video, drowning out rumors of his potential departure. "If Kylian (Mbappe), Leo (Messi) and myself are happy, PSG will do well," he added. "I hope this season all three of us will stay and it will go well."

It is the ninth time in 10 seasons PSG has lifted the Champions Trophy. It lost 1-0 to Lille at the same venue a year ago.

PSG begins its quest for a record 11th French league title away to Clermont on Aug 6.

Galtier became PSG's seventh different manager since the club's 2011 Qatari takeover when he was appointed on a two-year deal in early July as the replacement for Mauricio Pochettino.

The club won a protracted battle with Real Madrid in May to convince Mbappe to stay, but Galtier was without the France star for his first official match in charge due to suspension.

Pablo Sarabia, on loan at Sporting Lisbon last term, took Mbappe's place up front alongside Messi and Neymar, while Portugal midfielder Vitinha made his debut following his arrival from Porto.

PSG goalkeeper Gianluigi Donnarumma turned away a Ludovic Blas effort, but Neymar and Messi soon combined to break the deadlock.

The Brazilian's deflected pass rolled kindly toward Messi and the Argentine nonchalantly rounded Lafont to apply the finishing touch.

Lafont denied Messi a second but was left powerless minutes later as Neymar whipped a freekick into the top corner.

Nantes coach Antoine Kombouare got the better of Galtier in the French Cup final three months ago but found his former club in unforgiving mood here.

Ramos, who also endured a tough first year in Paris beset by injury, back-heeled home a third goal on 57 minutes after Lafont could only parry Sarabia's low cross.

France defender Nordi Mukiele came on in the closing stages for his PSG debut after arriving from RB Leipzig last week on a five-year deal.

And Neymar completed the rout with a penalty after Jean-Charles Castelletto was sent off for hauling him down inside the area.