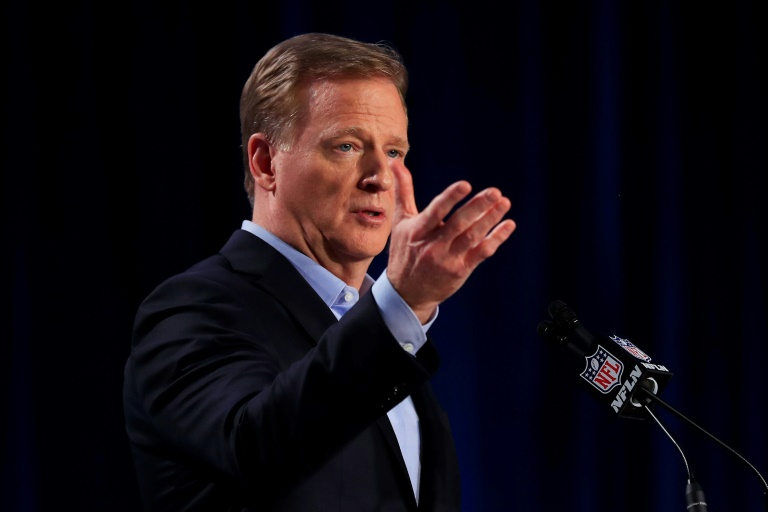 NFL Commissioner Roger Goodell said Saturday there "remains an urgent need for action" as violent protests rocked the United States after the death of an unarmed black man in police hands in Minnesota.

George Floyd, 46, died Monday after police officer Derek Chauvin pressed his knee to Floyd's throat for several minutes, as Floyd pleaded with him to stop. A bystander's video of the encounter has gone viral around the world.

Chauvin was fired on Tuesday and charged with third-degree murder and manslaughter on Friday, but outrage over the incident sparked protests around the United States, many of which have erupted into violence.

"The NFL family is greatly saddened by the tragic events across our country," Goodell said in a statement on Saturday.

"The protesters' reactions to these incidents reflect the pain, anger and frustration that so many of us feel."

Goodell offered condolences to Floyd's family as well as the families of Breonna Taylor, a black woman killed in her own home by police in Kentucky, and Ahmaud Arbery, a black jogger shot dead by a white man in Georgia.

"As current events dramatically underscore, there remains much more to do as a country and as a league," Goodell said. "These tragedies inform the NFL's commitment and our ongoing efforts. We embrace that responsibility and are committed to continuing the important work to address these systemic issues together with our players, clubs and partners."

A number of NFL players are among  sports figures who have spoken out in the wake of Floyd's death.

NBA star LeBron James was among those who contrasted pictures of Chauvin's knee on Floyd's neck with the kneeling protests of former NFL star Colin Kaepernick in 2016.

Kaepernick, who was ostracized by the NFL for kneeling during the national anthem in protest against racial injustice, has launched a fund to pay for legal representation for protesters who need it.

Miami Dolphins coach Brian Flores, who is black and of Honduran descent, noted some who voiced vehement opposition to Kaepernick's kneeling protest as disrespectful had been silent as black Americans died.

"Many people who broadcast their opinions on kneeling, or on the hiring of minorities don't seem to have an opinion on the recent murders of these young black men and women," Flores said.

"I think many of them quietly say that watching George Floyd plead for help is one of the more horrible things they have seen, but it's said amongst themselves where no one can hear.

"Broadcasting that opinion clearly is not important enough," said Flores, who is one of four minority head coaches in the NFL.

In Germany on Saturday, Schalke's American midfielder Weston McKennie wore a "Justice for George" armband in his team's 1-0 Bundesliga loss to Werder Bremen.

"To be able to use my platform to bring attention to a problem that has been going on too long feels good!!!" the 21-year-old tweeted.

The 16-year-old African American, who burst onto the international scene with a fourth-round run at Wimbledon last year that included a triumph over her idol Venus Williams, had posted her own chilling condemnation of Floyd's death on social media on Friday.

In a video she referenced a number of unarmed black Americans who died in recent years at the hands of authorities or white fellow citizens.