SPORTS No hugs as CFA draws up coronavirus battle plan

No hugs as CFA draws up coronavirus battle plan 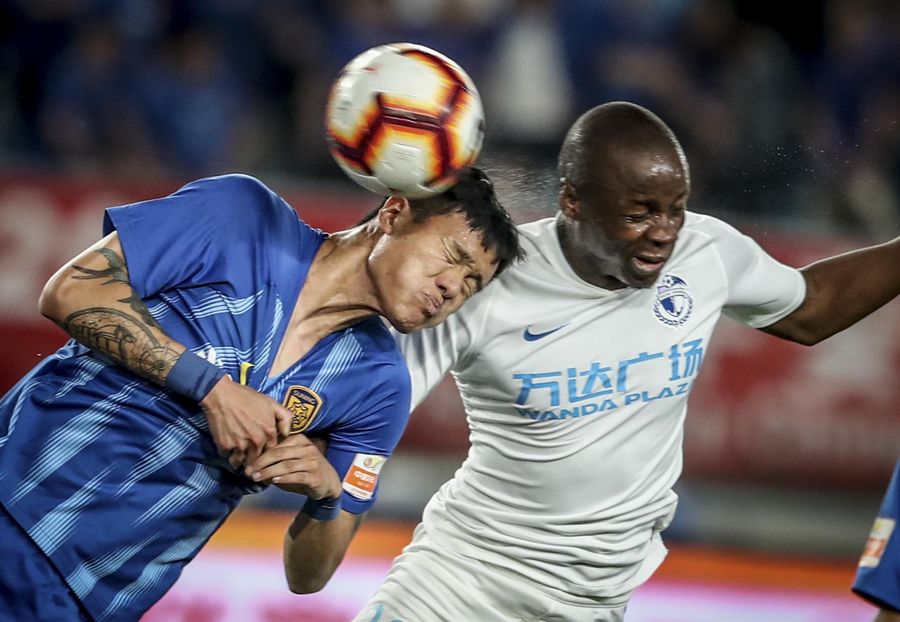 Li Ang (L) of Jiangsu Suning competes for a header with Dalian Yifang's Nyasha Mushekwi during a Chinese Super League match in Nanjing on May 5, 2019. (Photo: Xinhua)

The Chinese Super League will be stripped of exuberant goal celebrations — and fans — as it attempts to start during the coronavirus pandemic, reports said on Wednesday.

The CSL has ambitions of launching the season in late June or early July, and Chinese football authorities have drawn up detailed plans to keep players and fans safe.

The Chinese Football Association has taken a keen interest in South Korea's K-League and Germany's Bundesliga, which led the way in restarting despite lingering virus fears.

CSL matches will initially be held behind closed doors, in step with the K-League and Bundesliga, before fans are gradually allowed in, domestic media said.

Supporters will then have to sit at least one meter apart, the Beijing Youth Daily reported, while substitutes will also be spaced out on the sidelines and must wear masks.

"In addition, for the game itself, the league will also cancel (child) mascots, team handshakes, group photos and other activities," the report said.

"Photojournalists' area will be limited to behind the goal line and the sideline.

"After a goal is scored players are not allowed to gather and hug, all celebrations will be replaced by applause."

The anti-virus plans need government approval for the season to kick off.

The CSL, which was supposed to start on February 22, became one of the first sporting casualties of the coronavirus outbreak when it was indefinitely postponed in January.

Meanwhile, CSL club Shanghai Greenland Shenhua has said that it will not impose pay cuts on its players during the COVID-19 pandemic, instead, leaving it up to them.

The CFA unveiled a proposal on May 8, advising its affiliated professional clubs to introduce pay cuts to ease the financial strains brought about by the outbreak.

Shenhua's general director Zhou Jun indicated that the players should be aware of the difficulties their club is facing and should come to its aid.

"We will not impose the pay cuts. If a player refuses to cooperate when I talk with him about the salary reduction, I will not try any more persuasion," he was quoted as saying on Wednesday.

"Those players with the character I appreciate don't need me to discuss it with them, they will come to me asking what they can do for the club in difficulties.

"People should help each other, and the players who are grateful should have that sense."