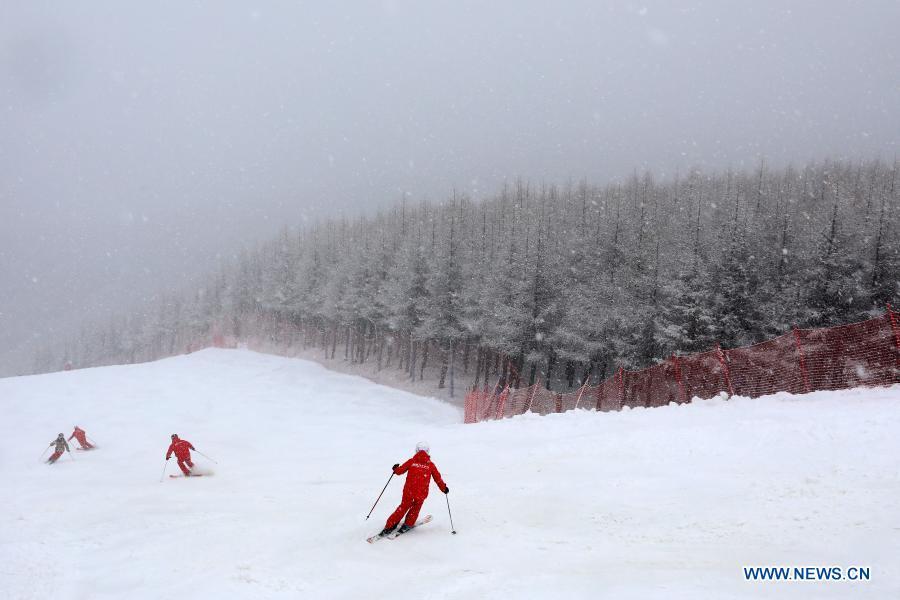 Taking the Beijing 2022 Winter Olympics as an opportunity, Chongli, a previously impoverished district of Zhangjiakou city in north China’s Hebei Province, has been promoting the development of the ice and snow industry in recent years, referred to as the “white economy.”

As a major competition zone for the snow events of the Olympic games, it has built seven ski resorts.

Eight years ago, Wen Chang, a farmer of Yingcha Village in the district, worried about his family’s income when they were relocated to downtown Chongli.

In 2012, the construction of the Thaiwoo Ski Resort & Alpine Park started in the village. All villagers moved out and over 95 percent of them were relocated to the district’s downtown area. Receiving compensation for relocation, Wen bought an apartment in downtown Chongli, benefitting from the development of the “white economy.”

The resort has created a job for at least one person from each family of the village. Wen now works at the resort, earning about 4,000 yuan per month with social insurance.

After Chongli was announced to be one of the venues for the Winter Olympics in 2015, the district has been blessed with an unexpected development opportunity of the ice and snow industry.

Driven by China’s plan to encourage 300 million people to participate in winter sports and related activities by 2022, Chongli has accelerated the development of the ice and snow industry, creating jobs for local residents.

“Now young people in Chongli like to work at local skiing resorts and may choose to start businesses as they see opportunities in the skiing industry,” said Lian Xin, a post-95s ski coach.

Chongli has also witnessed a surge of skiers and tourists in recent years. According to statistics, during the 2018-2019 snow season, 2.86 million tourists went to the district for skiing trips, driving the construction of more than 160 hotels and apartment hotels, as well as about 60 ski-equipment shops.

More than 30,000 people in Chongli are employed by the ice and snow and tourism industries. In May 2019, the district was officially lifted out of poverty.

Relying on its favorable natural scenery, Chongli has also developed summer outdoor activities, becoming a host for international competitions such as the 168 Ultra-Trail Challenge and the Spartan Race.

The Thaiwoo Ski Resort & Alpine Park alone received 200,000 visitors last summer, almost the same with those seen in the winter.