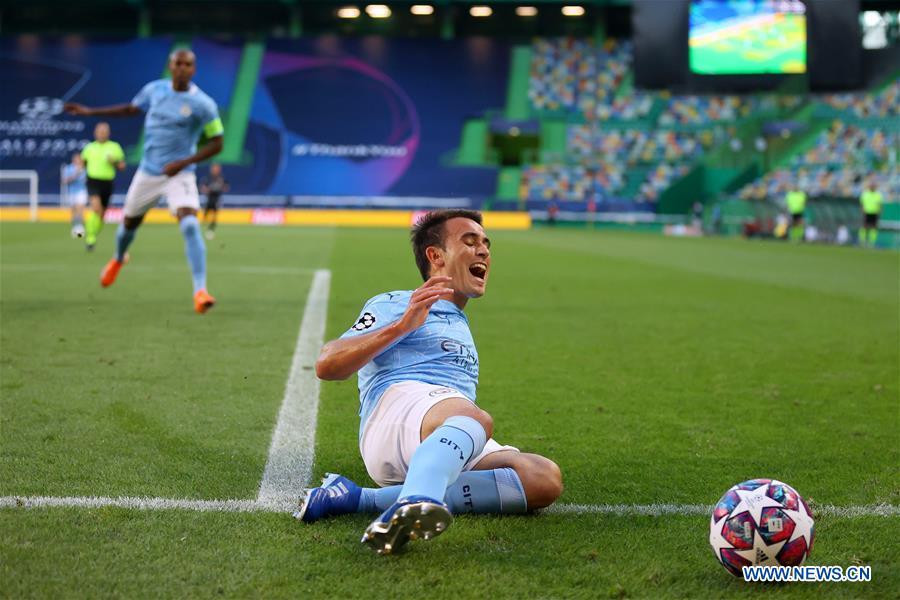 Eric Garcia of Manchester City reacts as he attempts to keep the ball in play during the UEFA Champions League Quarter Final match between Manchester City and Olympique Lyon in Lisbon, Portugal, Aug. 15, 2020. (Photo: Xinhua)

FC Barcelona on Tuesday confirmed central defender Eric Garcia as its second signing of the summer.

Garcia arrives on a free transfer from Manchester City, as did striker Sergio Aguero, who was presented to the press in the Camp Nou on Monday.

The 20-year-old Spain international returns to Barcelona after leaving the club in 2017 to join Manchester City when he was just 16 years old, but after refusing a new contract with the English club, his move back to Barca was considered to be an open secret.

Although he made just 19 Premier League appearances for Manchester City and 35 in all competitions (partly due to coach Pep Guardiola not picking him after he refused a new contract), Garcia has played at all levels for Spain and has already made seven appearances with the full national team and has been included by Spain coach Luis Enrique in the squad for this summer's European Championship.

Garcia has agreed to a contract until the end of June 2026 with a release clause set at 400 million euros.

Barca views Garca as a long-term replacement for Gerard Pique, while in the short-term his arrival will probably open the door for Samuel Umtiti to leave the Camp Nou. The fact he arrives on a free transfer (as did Aguero) also means the debt-ridden club is continuing with a 'low-cost' squad renovation.

Dutch international midfielder Georginio Wijnaldum is expected to be Barca's next arrival and he would also arrive on a free transfer after rejecting new terms with Liverpool.

Wijnaldum will arrive at the request of coach Ronald Koeman and the Dutchman looks more likely to continue at the Camp Nou next season after Barca president Joan Laporta said he "had a contract and our will is to respect it," when he was asked about Koeman's future at Aguero's presentation on Monday evening.