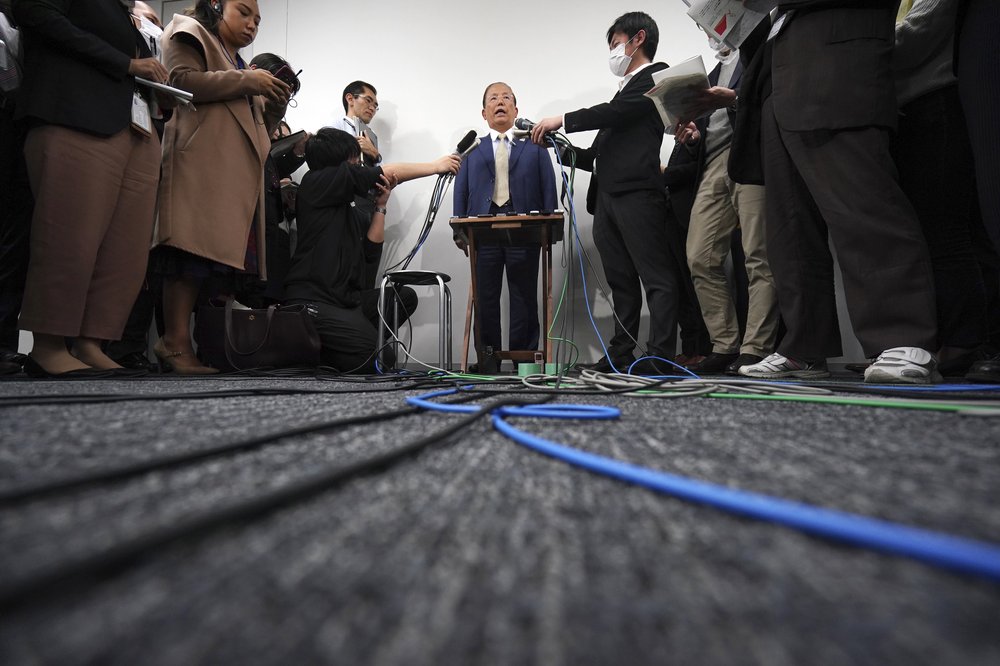 Toshiro Muto, CEO of the Tokyo 2020 Organizing Committee, is surrounded by journalists during a news conference in Tokyo Tuesday, March 17, 2020. (Photo: AP)

Tokyo Olympic organizers are pushing ahead with the Japanese leg of the torch relay despite the threat of the spreading coronavirus.

The Olympic flame, which is due to arrive on Friday from Greece, is scheduled to navigate the country for four months from March 26 until the planned opening of the Olympics on July 24 at the national stadium in Tokyo.

Organizing committee CEO Toshiro Muto said Tuesday that crowds will be allowed to gather on the roadside to watch the relay. The first leg begins in northern Fukushima prefecture, which was devastated in 2011 by an earthquake, tsunami and the meltdown of three nuclear reactors.

Muto asked for restraint and warned the relay could be stopped or delayed.

“We’d like to ask people who are feeling unwell to refrain from being on the roadside,” Muto said, speaking through an interpreter. “We would also like to ask people to avoid crowds when cheering along the road. In the event of overcrowding, we may have to change the way we carry out the relay.”

Muto was pushed several times about what crowd behavior he was asking for.

“We don’t want to talk about the definition of refraining,” he said. “But we don’t want people to feel there is an all-out blanket request for refraining. So basically it depends on you interpretation.”

He said it was difficult to define what constitutes too many people. Speaking in a room with about 100 reporters, Muto was asked if this was too many.

“This is packed,” he said, “but not overpacked.”

The torch relay in Greece last week was called off on the second day because crowds were too large.

Muto was also pressed again about the chance of the Olympics being canceled or postponed.

“In many ways and many forms people are asking us the same question,” Muto said. “Our stance is, as scheduled, the Olympics are going to take place in a safe and secure manner.”

The torch relay is heavily sponsored by Coca-Cola and Japanese car maker Toyota, which pay millions of dollars as some of the International Olympic Committee’s top sponsors. They are sure to lose exposure during the relay, and Muto was asked if sponsors were concerned about economic damage.