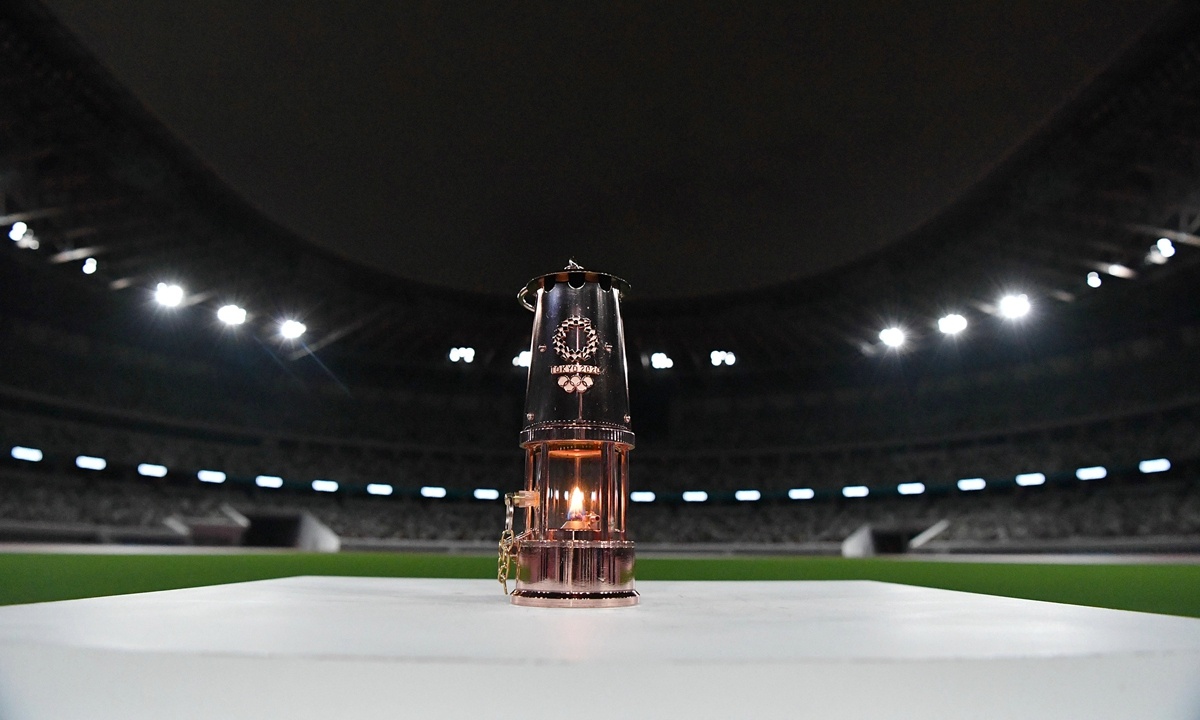 A lantern with the Olympic flame is placed at the National Stadium in Tokyo, Japan, on July 23. (Photo: VCG)

Next year's coronavirus-postponed Olympics could be held in front of a "limited number of spectators" to prevent the spread of infection, Tokyo 2020 chief executive Toshiro Muto has said.

The Tokyo 2020 Games are now scheduled to open on July 23, 2021, after a historic postponement forced by the global march of the pandemic.

Muto told BBC Sports that organizers were committed to holding the event in 2021, with no discussion of canceling or postponing it further.

"Everyone should focus on holding the event next year - we're on the same page."

He said International Olympic Committee chief Thomas Bach was "not looking for" a Games held without any fans, but acknowledged smaller audiences might be possible.

"He may be thinking about a limited number of spectators with full consideration of social distancing," Muto said.

"We must build an environment where people feel safe. Athletes and the international Olympic family may require testing before/after entering Japan and [we need] strong medical systems around accommodation and transportation plans," he added.

Japan currently bans visitors from more than 100 countries and regions in a bid to limit the spread of the virus and Muto said it was "too optimistic to assume all restrictions will be gone, so we must think of other ways."

With just under a year to go until the postponed Games, Japanese citizens have expressed skepticism about whether the Olympics can or should be held.

Two polls in July found the majority of Japanese think the Games should be postponed again or cancelled altogether.

And several medical experts have suggested the Games will not be viable without a proven treatment or vaccine for the virus.

Muto said a vaccine would be "a benefit ... [but] not a precondition."

Chairman of the Tokyo Coordination Committee John Coates sounded a positive note by saying the Games would go ahead with or without a vaccine.

Organizers were "going ahead on the basis there won't be a vaccine," Coates told the Australia newspaper

He added that they were ­prepared "under whatever scenario we have to face, which will become clearer at the end of the year."

Japan has so far seen experienced a comparatively small coronavirus outbreak, but infections have been on the rise, particularly in the capital.

Tokyo Governor Yuriko Koike, speaking to Japan's Kyodo news agency on Wednesday, warned that "containing the new coronavirus inside the capital is a prerequisite" for holding the Games.