SPORTS Outdoor hockey in Texas? Sure thing, and it was quite a hit

Outdoor hockey in Texas? Sure thing, and it was quite a hit 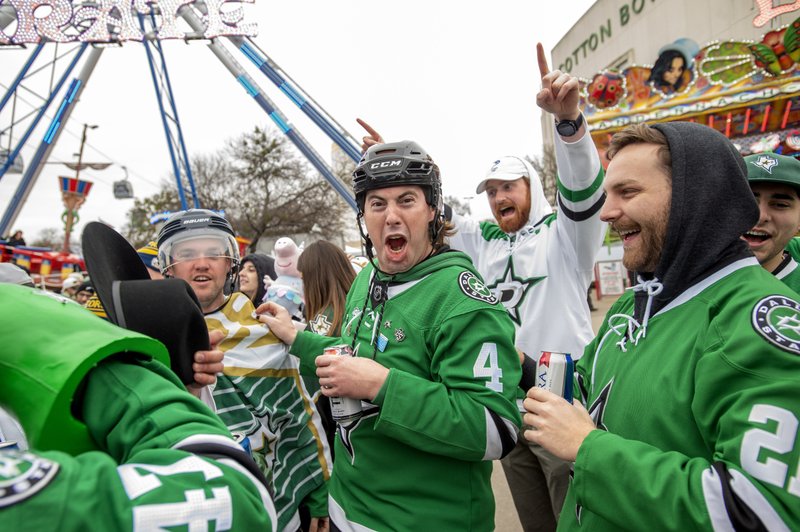 Dallas Stars fans get hyped in the midway outside the Cotton Bowl before the NHL Winter Classic hockey game between the Dallas Stars and the Nashville Predators, Wednesday, Jan. 1, 2020, in Dallas. (Photo: AP)

Ryan Clare chewed on a turkey leg as he milled about the Texas state fairgrounds hours before another major sporting event inside historic Cotton Bowl Stadium.

No, this wasn’t the Texas-Oklahoma football game, always held in October during the fair. Clare has been to the annual Red River rivalry, but the Dallas resident has been a Stars fan for more than 20 years.

Getting tickets to the NHL’s Winter Classic, where the host Dallas Stars rallied for a 4-2 win over the Nashville Predators, was a no-brainer for Clare, and probably many others among the 85,630 who filled a venue that used to be famous for college football on New Year’s Day.

“This is kind of a once-in-a-lifetime event and everything,” said Clare, the bottom of the Dallas resident’s green No. 4 Miro Heiskanen jersey covering the top of his black kilt. “When are you going to something like this in Texas ever again?”

Yes, outdoor hockey in Texas was as much the spectacle as that phrase sounds, with racing pigs just outside the rink on the stadium floor, and horses spooked by fireworks during “The Star-Spangled Banner.”

At one end of the stadium, line dancers stepped to the beat of live country music in front of a stage that wasn’t far from a mechanical bull.

“I understand Twitter is going nuts in a good way about the pig races,” Commissioner Gary Bettman said. “We tried to blend Texas and hockey. Each year we try and learn something and do it a little bit better.”

The midway on the fairgrounds was filled with thousands of fans several hours before the game, some riding the giant Ferris wheel just southwest of the stadium and others on the swinging pirate ship or the haunted house ride.

Some waited in line at least an hour for one of the signatures of the State Fair of Texas: a corn dog. “It was worth it,” one said. There were so many lines, some didn’t know where one started and the other ended.

Others almost ended up on the sky tram that crisscrosses the fairgrounds, when all they wanted to do was get in the stadium.

There was some impatience in a huge cluster of fans outside the main entrance to the Cotton Bowl, a standstill bad enough for some to think it was the only way into the stadium when there were actually plenty of other options.

“It’s been sensational,” Bettman said. “The only complaints that we’ve been getting is that it’s been too crowded. And in this business, you’ll take that.”

The biggest difference from the Texas-OU spectacle was the fairgrounds emptying out once the game started. When the Longhorns and Sooners play, there are still thousands of regular fair-goers to see in the aerial television shots.

Inside, there was a bunch of Dallas green, and a strong contingent of yellow-clad Predators fans.

Among them was Sonya Baird, a lifelong resident of southeast Texas who can’t really explain how she became a Nashville fan, other than liking the style and energy of Shea Weber, who spent his first 11 seasons with the Predators.

And Baird’s never been to the state fair, so ...

“I didn’t know where this place was,” she said. “It’s pretty cool. I don’t like crowds for some reason. It wasn’t going to keep me away.”

Same with Bryan Granstaff, who came from outside Nashville because his daughter wanted to attend. He wasn’t much of a football fan, and couldn’t say he’d seen a football game from the Cotton Bowl on TV.

“The only thing I keep up with is hockey,” said Granstaff, a Predators fan for about five years. “Hockey and huntin’.”

Well, at least half of that is quintessential Texas. As for the hockey half, it took quite a step to start 2020.